How to connect a 4 channel relay switch directly to a 5V power source?

When connecting a 4 channel relay to a Arduino Pro mini, there is a noticeable power drain from the board when relays are active. This is clearly visible as the 16x2 LCD dims. I remember reading that this could damage the Arduino, is this true?

In any case, since the entire project will be powered by a rechargeable 12V battery, I bought some buck converters to lower the voltage from 12V to 4.66V (this is what I identified the output to be from the Arduino, I even tried increasing it to 4.8V), so I can power the relay switch directly instead of going through the Arduino.

However, the relay does not power on and I have no idea why. Can someone help me understand? I'm new to this. 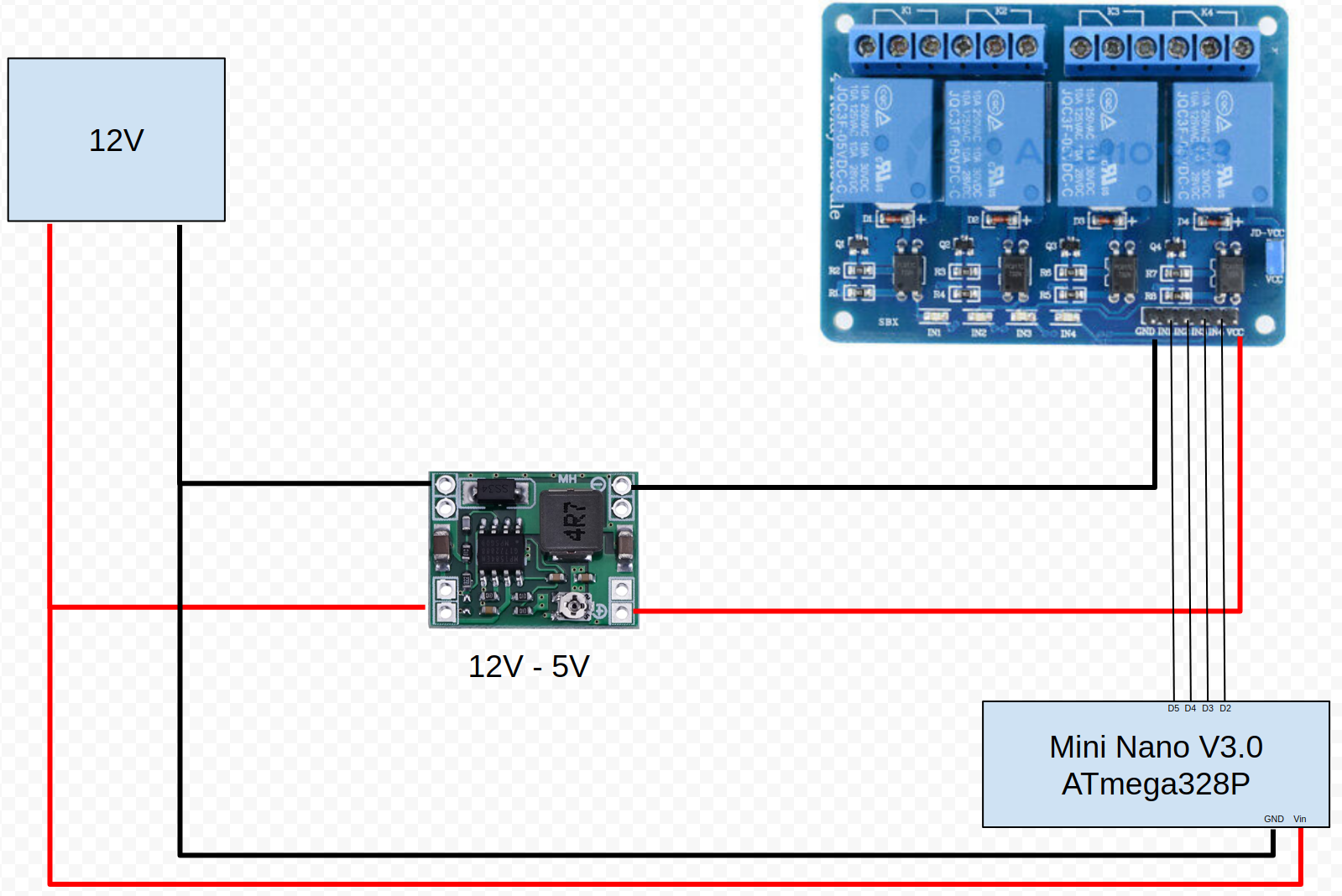 I found this answer but I do not know if it applies and, if it does, what changes I would need to make with my current connections.

Arduinos' on-board voltage regulators are not particularly efficient; they sink to ground whatever the board doesn't draw, dissipating it as heat. And they usually are not provided with heat sinks, meaning the regulator is heat-limited. You're powering the Arduino with 12v, so whatever current the Arduino does draw, that same current times 7 volts (the voltage drop from 12v to 5v) is waste heat. Driving four relay coils draws (using the specs on the Amazon page) adds 80mA (times 7v) to that heat dissipation.

It looks like at least some Pro Minis (yours?) use a Micrel 2095 voltage regulator which has internal current limiting which may include thermal protection(?) -- shutting off your Arduino when the regulator gets too hot.

Despite that some of the above is speculative on my part, it does suggest an experiment. You've got a regulated 5v source - instead of powering the Arduino at Vin from the 12v source, try powering it's +5v pin with +5, which would significantly reduce the regulator's power dissipation (and therefore, its temperature).

It takes considerable additional design steps to make project run on a battery and replacing relays for bigger transformers or mosfets is often part of it.

Set any of the relays on, in arduino code and measure its voltage against ground. If its 5V then arduino is sending signal fine.

If it is not, then check the resistance between its and arduinos ground. if its just few ohms look for issues on the arduino. if resistance between grounds is big or even unmeasurable, then connect the arduino ground with relay board ground. If you can measure 3-5V (Dependant on a pro mini version) between arduinos output and the ground then you don't have enough power on the relay modules supply.

Extra note:Make sure the arduino is not powered from buck converter as volage regulator has minimum voltage diference it can drop and could not be powered via regulator from a supply of less then 6.something Volts

As stated in Jroberts answer once everithing is working, you might want to disconnect the suplly to arduino from 12 volt source to Vin; and connect your arduino to your buck converter set at 5V (4.95ish-5.05ish) to 5V pin adding 10uF capacitor between the 5V and GND on arduino. The buck converters are more efficient in dropping voltage, then voltage regulators, so that would extend your battery life. (this isnt majourisue as compared to the arduinos consuption is tiny compared t the consumption of the relays