Why does my Arduino/Ledstrip combi not work? 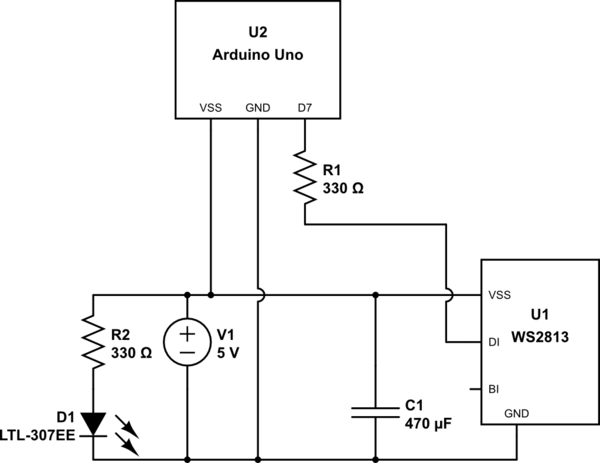 It seems like a default schematics (except I did use a 470 uF (electrolytical) cap instead of 1000 uF electrolytical cap.

(I accidantally marked the VCC pin of U1 VSS).

I don't get any LED of the LED strip glowing.

The program I used is:

What I tried was:

However, what I did see, is the logic analyzer data AFTER the 330 ohm resistor mostly removes the data, while the data before the resistor is ok. However, when remove the resistance, still the LED strip does not light up.

Channel 0 is before the resistor, channel 1 after:

What did I do wrong?

It is important to connect the Arduino digital pin to the correct end of the LED strip.

The power and ground connections can be made from either end, but the data IN is at one end and data OUT is at the other end.

That arrangement is for the purpose of daisychaining the LED strips.

The LEDs themselves also have data IN and data OUT, and are also daisychained with their neighbouring LEDs.

The LEDs are serially connected to each other through the data line, and are connected in parallel to the power and ground lines.

Not the answer you're looking for? Browse other questions tagged arduino-uno led-strip or ask your own question.