I am trying too hook up a WS2812B LED strip to an arduino nano. The current strip consists of 6 pixels, and the whole thing is powered via a 5.26V Pc power supply.

The problem is that the first pixel keeps dying after about 1 minute. This means i have to cut the strip and re-solder the connections. Before the failure, the strip runs the correct examples from the FastLED package. 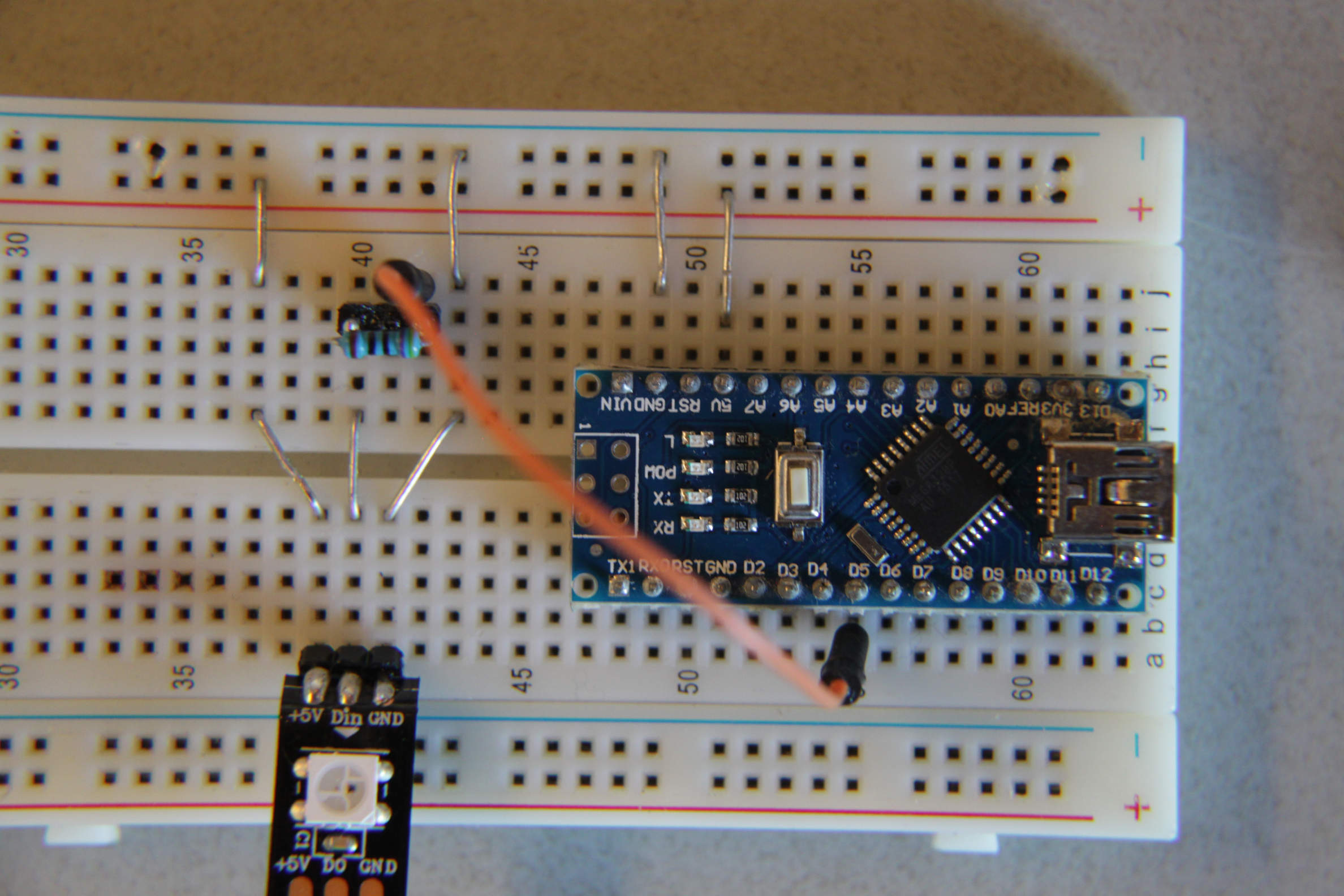 As this happened I looked for solutions. https://learn.adafruit.com/adafruit-neopixel-uberguide/best-practices suggested: 1) adding a 1000 µF capacitor between ground and +5v to cancel power peaks 2) adding a 300-500Ohm resistor between the strip_Data_in and D5 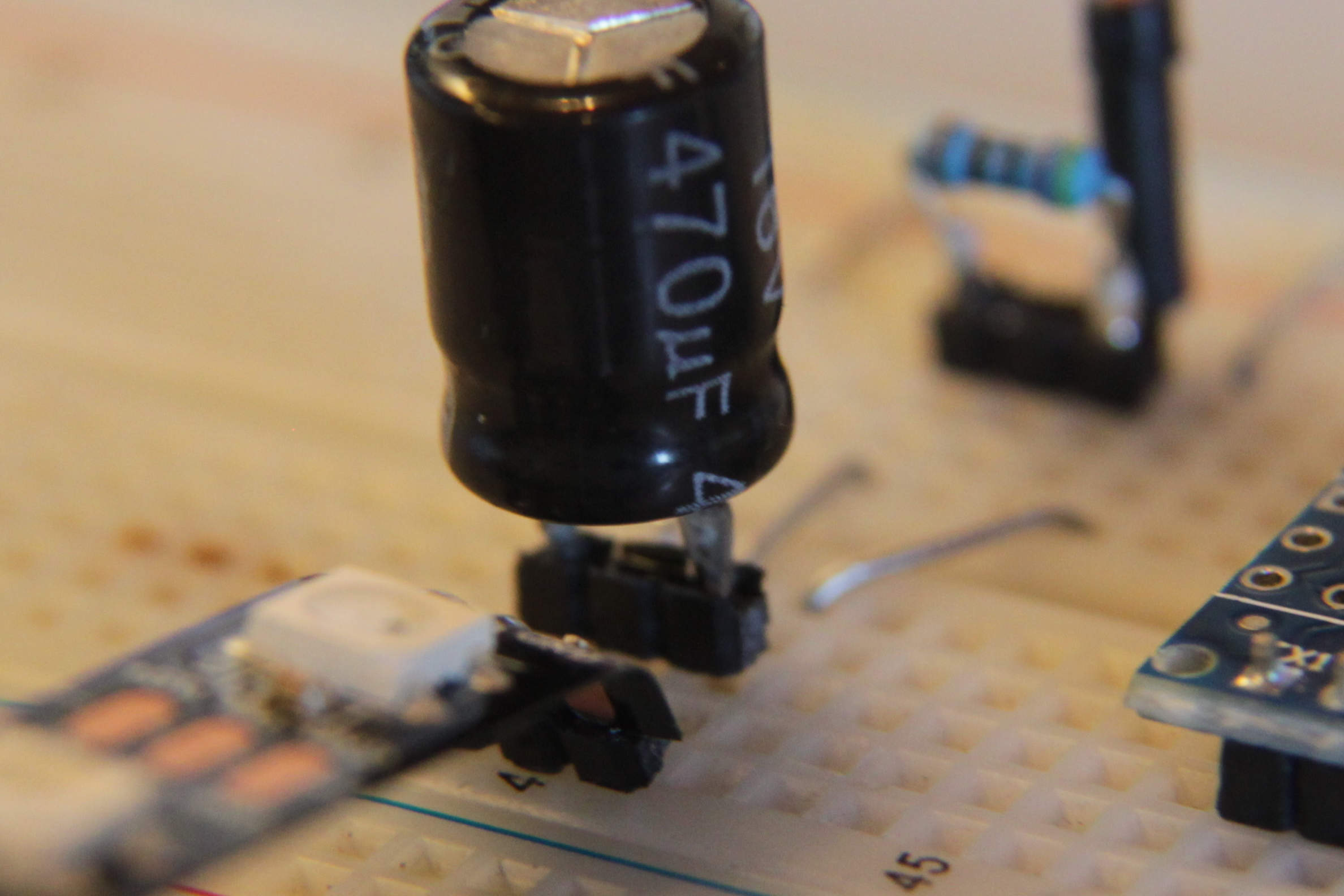 This did not solve the problem. Another recommendation was to place a diode between the data and +5. ( I think this is to remove any power spikes in the data connection. With a good power supply this should not be necessary i guess, but it couldn't hurt.) Another tip was to add a 100kOhm resistor between data and ground.

putting all mentioned above together gives something like this: 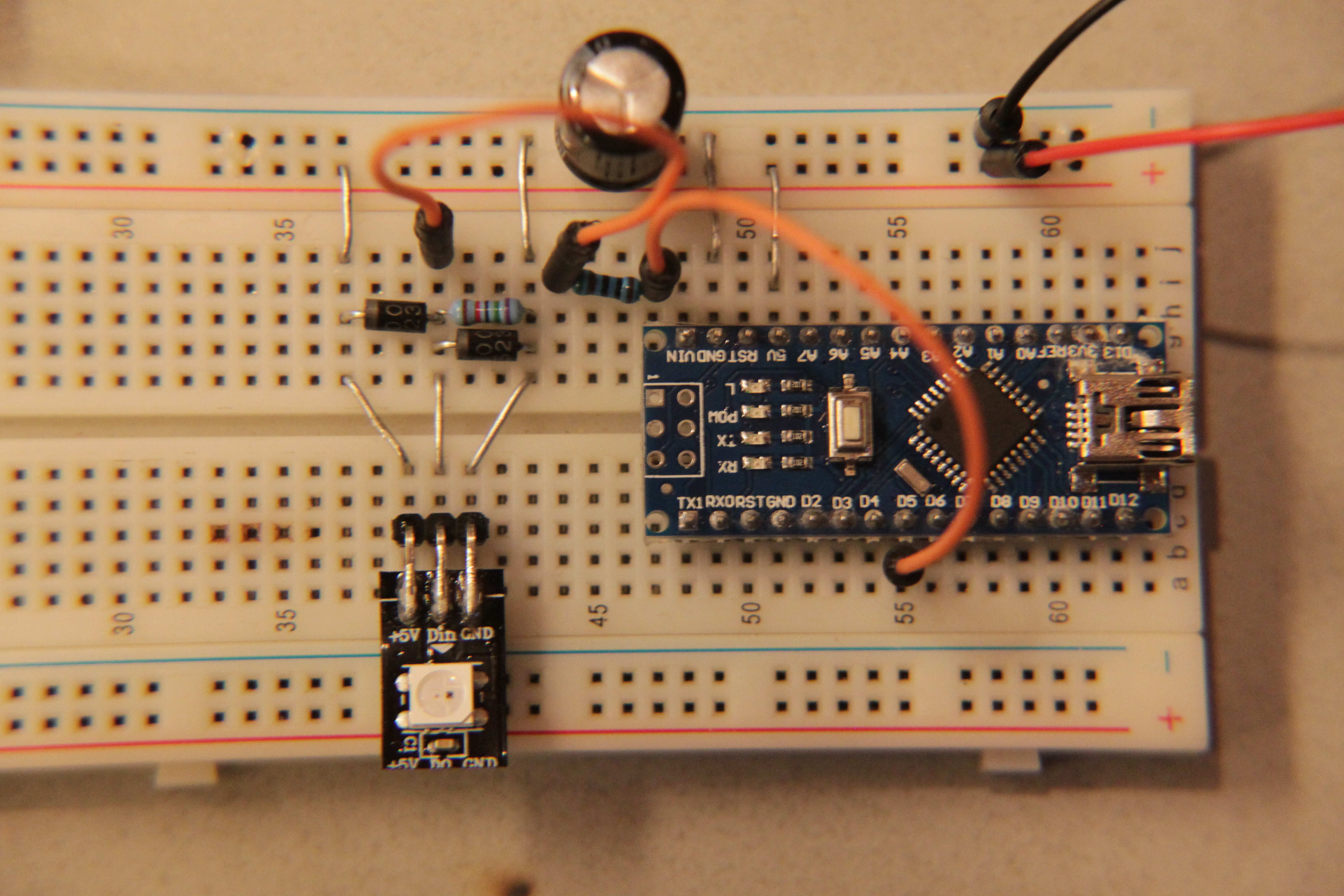 But in the end nothing changed. I tried alot of variations of solutions: 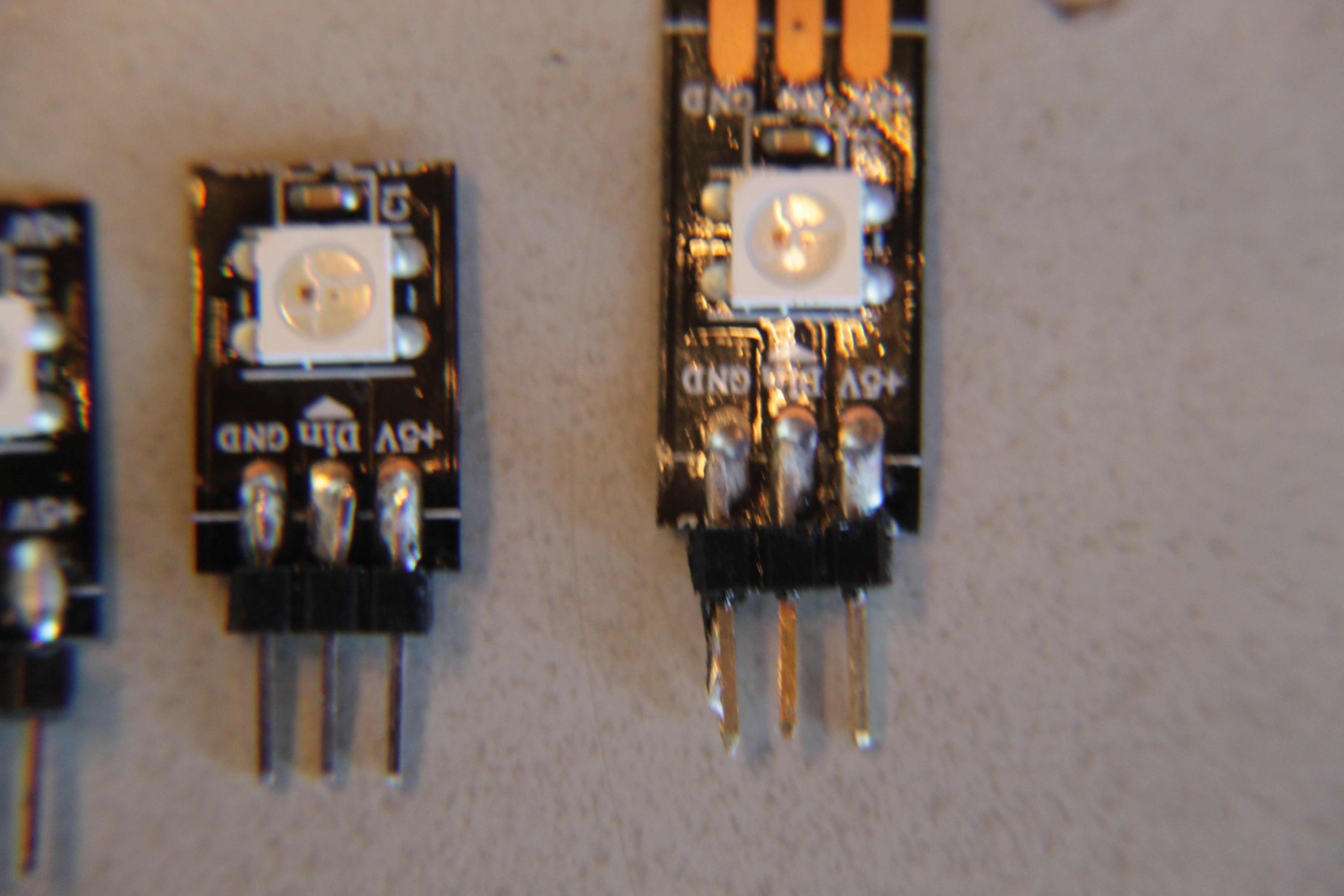 I have burnt 30 pixels so far, with all the same result: blinking, tripping, and eventually failure. Removing the first LED always fixed the problem. This brand of LEDStrip did work on some other premade controller.

Some of my own ideas, of causes:

EDIT 1): I did some additional tests.

I would guess that IF:

The cable should be unable to break itself right?

I found (a part of) the problem:

The soldered pin connections at start of the ribbon had leaking current. This was due to the soldering flux remaining around the pins. Rinsing the connection with water carefully solved the problem.

In earlier runs I soldered with flux and simply wiped it off afterwards. Also note that I am generous in flux usage. I do not know how people can make neat solderingwork without it. Just scraping, and wiping with tissues between the connections is apparently unreliable. The flux is water solutable, said the package, so I used tap water for cleaning, but I also tried alcohol at times. Of course by taking care not to make anything wet besides the connection, and drying careful afterwards.

Obviously I checked the look of my soldering earlier as well, and it looked quite neat in my opinion. Yet measuring resistance between pins gave varying results, also compared with unsoldered, which made me wonder why. Cleaning the area around the soldered pins seemed to remove this, which indicates that this may be due to the soldering flux that was remaining. I also heard that flux tends to start flowing again as it heats up under operation, which indicates why the connection seemed good right after soldering, but changed trough time. Perhaps this is why people use these ultrasonic cleaning baths or something.

About the led strips: They were one of the cheapest ones available.

About the power supplies: The first power supply is the 5v line from a PC power supply, which should be able to give quite some amps. ( i forgot how much exactly, but way more than I needed) The second power supply was a Lithion battery with regulator. The thing says it is able to supply 2 amps, but I stayed far away from this limit.

Thank you for your tips. You help me keep improving myself.

Any more tips on cleaning soldered connections are welcome.

To my understanding, anything connected to the data line (resistors, diodes, etc) is there to protect to data pin from either sourcing too much current to the LEDs or receive a too high voltage.

The capacitor, on the other hand, is there to provide a buffer and maintain the voltage at the right value when current absorption increases with a spike.

If your LEDS burn up and it's always the first one, assuming they are all programmed to lit up of the same color, the most reasonable reason IMHO is you are feeding too much current, in particular in the form of higher voltage through the resistors on the strip.

I suggest you double check the source voltage with no load and with a light load, then try a different power supply and, as last resort, try to lower the brightness intensity of the LEDS: set brightness to 50% and check if it takes like 3 or 4 times longer to burn the LED, which will be a confirmation about my statement.

The first LED is the one receiving the highest voltage in the strip as the strip itself has a non trivial resistance, especially the cheap ones. Lowering the brightness you are actually lowering the amount of time the LED is on and it should prolong the LED life in a non linear way.

If my assumption is correct, this also means you have already partially damaged all the LEDS on the strip, the closer to the power, the more damaged they are.

Check the power supply. It is likely too high a voltage. 5.3V is the absolute max. The resistor is only to prevent signal reflections on long wire runs. Neither it or the diodes are needed for your setup.

For comparison, here are 4 rings of 43 WS2812B each, with only a 0.1uF cap per chip, each ring driven from a different data pin on an Uno, which is off screen, and a 10A power supply (4 rings x 43 LEDs/ring * 60mA/LED = 10.3A max current). https://www.youtube.com/watch?v=CGOxbehyoM4 You can see the wires are much longer than yours. Unfortunately the camera doesn't self adjust to the brightness changes too well, so the video can be a bit glary at times.

Not the answer you're looking for? Browse other questions tagged neopixel led-strip or ask your own question.

1
LED strip problem... getting red when expecting white with lots of pixels. Fine with 1 pixel
0
Is there any problem in running Arduino logic to 12V LEDs?
3
What can I do to increase the amount of LEDs I can power with a pro micro?
0
LED strip brightness decreases when using multiple strips
0
Powering LED Strip at both ends shorts my psu?
0
Troubleshooting WS2812b LED strip with toggle on/off button
2
Issue with bluetooth and a large number LED strip