I want to program an atmega328p-pu via my arduino uno as ISP in a circuit.

I omitted my connected sensors, LCD, etc in the schematic to keep it simple. 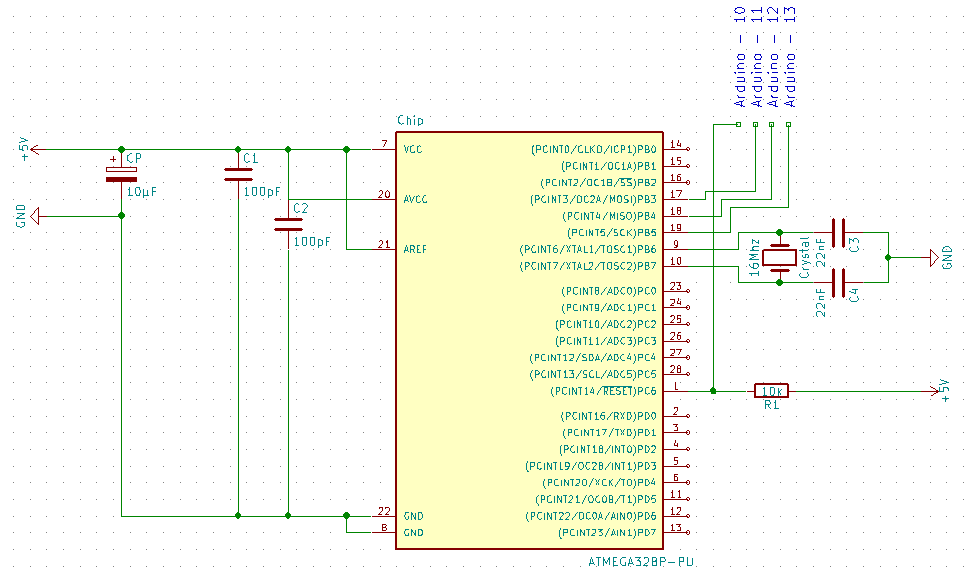 When powering off the circuit and connecting 5V and GND from the arduino to the power and gnd lines in my circuit everything works fine.

I connect 5V and GND from the arduino via pin headers I added to the 5V and GND rails in my circuit to power external sensors etc.

Is there a reason I apparently have to use power from the arduino?

Even with an external supply, you must still have a common ground reference between the ATmega being programmed, and the Arduino/ATmega doing the programming. According to your comment this was the critical issue.

Also keep in mind that the specifications of most ICs including the ATmega prohibit applying signal voltages when the chip itself is unpowered. To stay within that specification, you would need to turn on the external supply first, and insure that all of the pins were in their high impedance state and not driving the programmer's ATmega when it is unpowered.

Your pullup resistor on the target's reset would weakly drive pin 10 on the programmer, but a 10K resistor should limit the current to within what the protection diode on the corresponding ATmega pin can tolerate (even such a weak current can however cause problems with clean startup, though the ATmega is less sensitive than some other devices).

If you can't be sure power is going to be applied correctly, putting 1K (maybe even 2.2K) series resistors between the two chips can help a little, but there's a balance between keeping the signals strong enough to work well, and keeping illicit currents weak enough to avoid stress.

Not the answer you're looking for? Browse other questions tagged arduino-uno atmega328 isp or ask your own question.