LED on same Pin as Toggle Switch, not illuminating

I am trying to do something I think should be relatively simple. I would like to read an input from a toggle switch, and have a red 5mm LED indicate the state of the switch. Rather, however, than have an input for the switch and an output for the LED (controlled by software), I'd like to put them in series on a single circuit. That is, flip the toggle and current flows from the 5v source on the Arduino Uno through an LED and to an input pin on the Arduino. (I would ultimately like to have eight such switches; I am trying to create a sort of simulated byte, with individually flippable bits controlled by toggles; this will be read by a GTK Python program, that can interpret that "byte" in different ways: as a decimal value, a hex value, an ASCII character, a color in 8-bit color space, etc).

So, I have an LED with a 200 Ohm current-limiting resistor. I also have a pull-down resistor (1k) to prevent the toggle from floating.

My results, however, have been inconsistent. Using a breadboard, I've gotten this working. But it seems very fragile, and sometimes when I rebuild the circuit on a breadboard, it doesn't work as expected. Right now, for instance, the switch seems to work, and I am reading the expected value from the Serial Monitor--but the LED is not illuminating.

I had been playing around with different values for the pull-down resistor and the current-limiting resistor. This pair (200-ohm current limiting; 1k pull down) seemed to work, but now isn't. (I have swapped out the LED; and current is passing through the LED, otherwise I wouldn't be able to read the correct pin value--I think.)

Is there something I'm not understanding? Does the position of the current limiting resistor (before/after the LED) make any difference (I assume not)? Does this seem like the correct setup for what I'm trying to achieve? More generally, should, in principle, this approach scale to 8 more toggle/LED pairs? Is there a better/smarter approach? Is there a reason why I see so few Arduino projects that put LEDs in series with an input toggle? 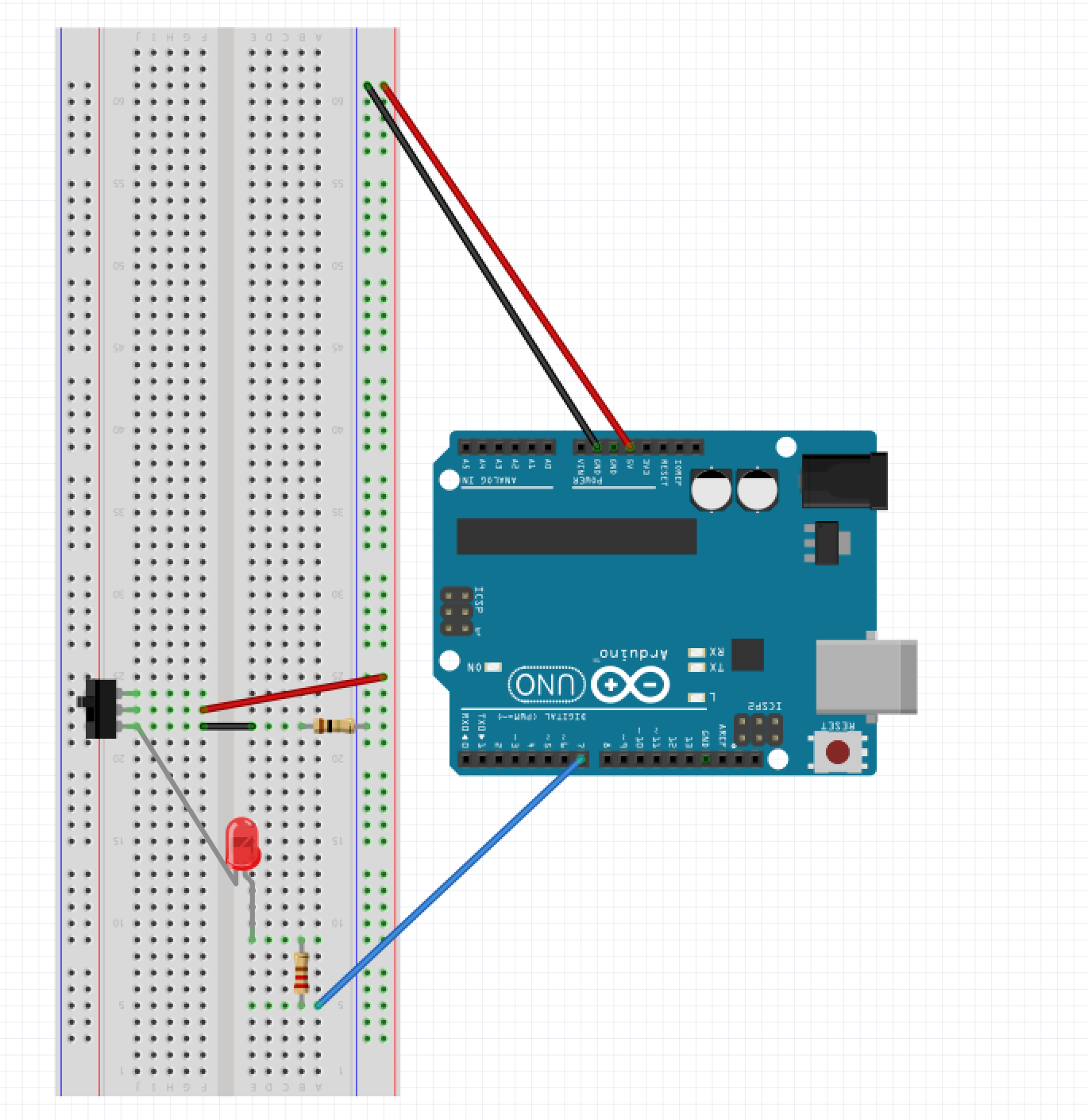 LEDs have a (fairly) fixed voltage drop across them. The red LED is about 2V.

You can use that to work out the voltage at the input. You basically have a voltage divider, with your 200Ω resistor as R1, and your 1kΩ resistor as R2. The voltage drop of the diode is subtracted from Vin.

You're between those two voltages - in the "dead zone".

The simplest way to achieve what you want is to use a douple-pole switch and keep the LED completely separate from the Arduino.

This is your circuit that does not work: 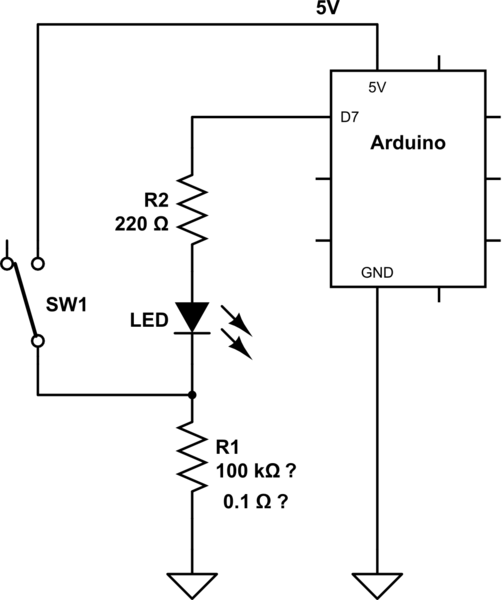 There are many ways to use a single pin. Some circuits are with a diode and some circuits need to turn off the led to read the switch. The most simple solution might be this: 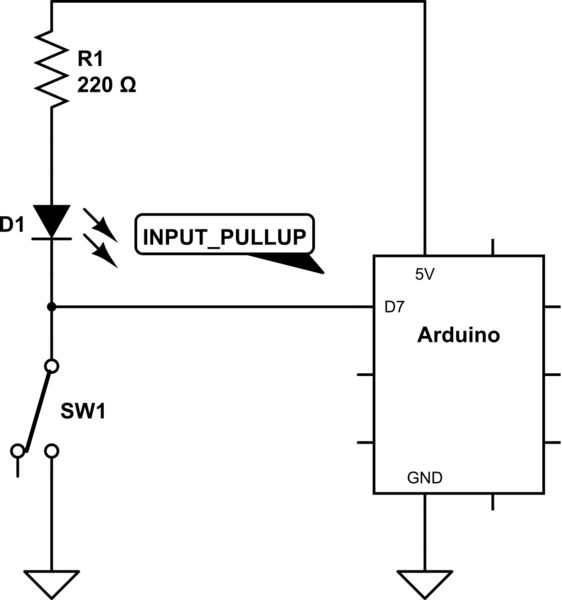 When the switch is not closed, the LED is a weak pullup (perhaps too weak). By using INPUT_PULLUP for D7, the pullup is stronger and D7 can read the switch.
As an extra it is possible to turn the LED on when the switch is open. But you have to be sure to switch between OUTPUT + LOW and INPUT_PULLUP in the code or else there is a shortcut.

Not the answer you're looking for? Browse other questions tagged arduino-uno led switch or ask your own question.

2
Source power with 2 V and LED with forward voltage of 2 V
3
7-Segment Common Anode
1
Multi-LED Toggle Switch
1
Getting more current through an LED array
0
Problem : Trigger limit switch to stop DC motor
0
Using a toggle switch to run part of a sketch
2
Connecting LEDs and push buttons 12 feet away from Arduino UNO
1
Is it possible to use a slide switch without a resistor?