Getting more current through an LED array

I have an Arduino Uno controlling an array of 24 LEDs (datasheet). I understand these LEDs are ultraviolet and have a forward current of 0.5A. My power source (12V 2A) is wired to a switch which is then wired to the LED array and Arduino. I should probably use a 12V 4A power source but was worried if too much current would go to the Arduino. As per my attached diagram, the Arduino and LED array are in parallel. I would like to get more current through my LEDs to increase their brightness. What would be the best way to do this?

Updated: I tried adding a 100 Ohm resistor (where R11 is located) but the Arduino wasn't drawing enough power to turn on my LCD. And then I tried a 1 Ohm resistor instead but the resistor burned out. Unfortunately, I threw out the resistor and don't have a picture of it. I believe the correct value should be ~47 Ohm so I have added that resistance as R11. However, I haven't tested it yet as I want to make sure it's correct. (12V - 6V) = 130mA * R >>> R = 46.15 Ohm. I used a voltage drop of 6V so that at least 5V is still going into the Arduino (12V - 6V = 6V which is greater than 5V). I measured the current through a multimeter to be 130mA. 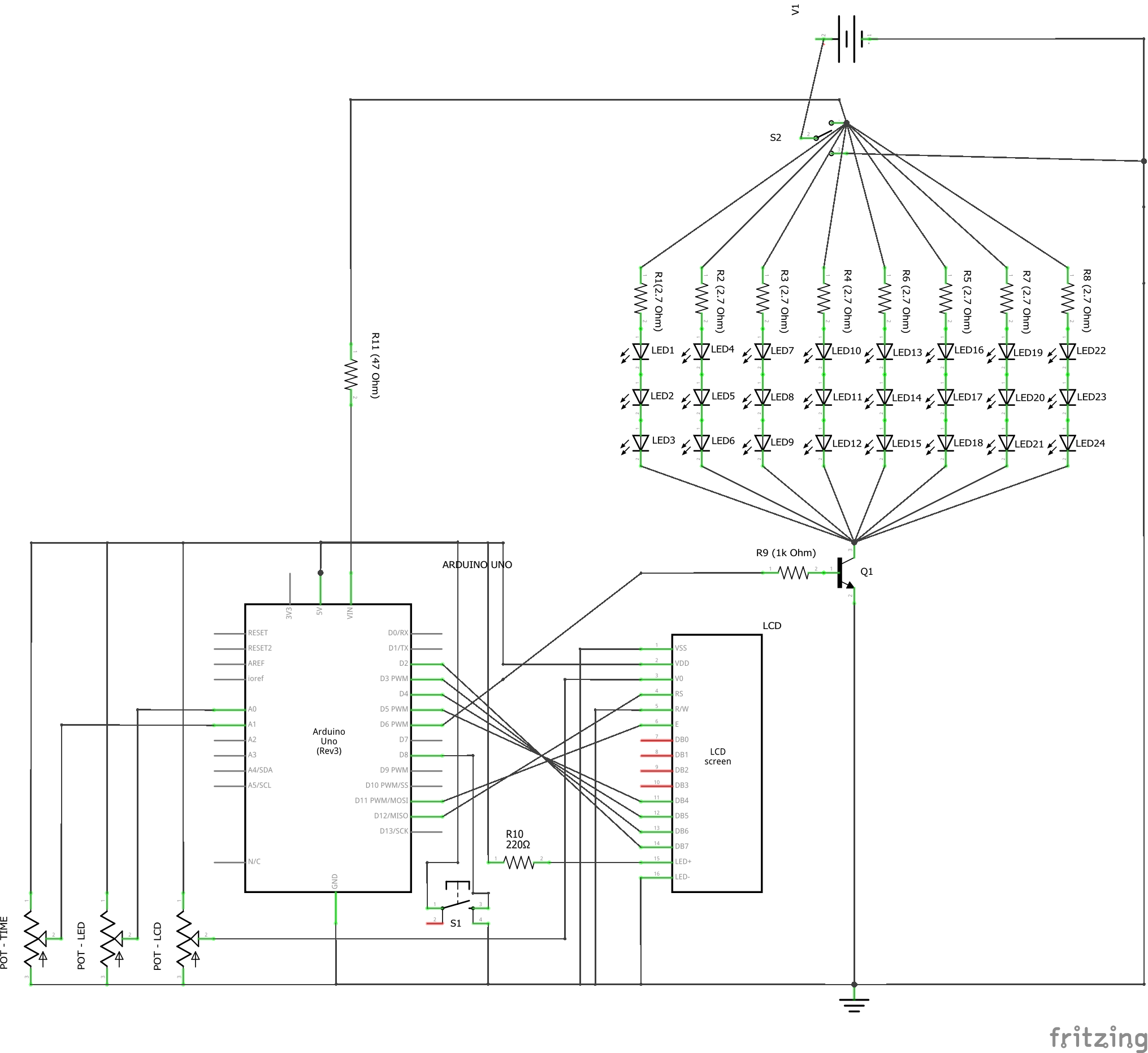 The current a bipolar transistor configured as a common emitter amplifier will allow from its collector to its emitter is equal to its beta time the base to emitter current.

A beta of 100 is common for many transistors. Assuming this information is close enough to your transistor, we can choose a base series resistance suitable for the collector to emitter current desired.

For example if you were using a 5 volt microprocessor and the voltage drop across the base to emitter was the usual 0.7 volts for silicon semiconductors and you had a base series resistor of 10Kohms:

You could pass up to 43mA from the collector to the emitter. If that is not enough,you can lowered the base resistor to 1Kohms:

And increase the current to 430mA. You still need to verify that the processor can supply the current to control the transistor (4.3mA as calculated above) as well as pick a transistor of sufficient capacity to handle the load.

If a beta of about 100 is not enough, consider using a Darlington transistor arrangement. This type of "2 transistor" device has a gain of the product of each individual transistor's beta. So, it is common for such a device to have a beta of 10000! Using this device, you can use a much larger base resistor and still be able to switch more current.

I tried adding a 100 Ohm resistor (where R11 is located) but the Arduino wasn't drawing enough power to turn on my LCD.

You should not have a resistor in the Arduino's supply line at all.

And then I tried a 1 Ohm resistor instead but the resistor burned out.

If you really wanted to have one to share the heat load of the on-board regulator, it would need to be a power resistor of appropriate wattage rating.

I believe the correct value should be ~47 Ohm so I have added that resistance as R11...I used a voltage drop of 6V so that at least 5V is still going into the Arduino (12V - 6V = 6V which is greater than 5V). I measured the current through a multimeter to be 130mA.

The Arduino's regulator needs something like 7 volts input to operate correctly.

The power drawn by the Arduino will not be fixed, it will depend on what it is doing, what I/Os are exerted against what loads, and other things like the LCD you apparently have.

Likely, if you want to use a power resistor you should design it to drop no more than half of the difference between the supply voltage and the regulator dropout voltage, under conditions of maximum load. A fixed power resistor cannot be used to replace the variable power resistor that is a linear regulator; at most it can be used to offset some of the fixed part of the resistance and resulting thermal load. But you still have to leave all of the variable part plus a healthy margin for the regulator to handle, or it won't be able to regulate.

It would be simpler to just put a heatsink on the regulator.

Not the answer you're looking for? Browse other questions tagged arduino-uno led current or ask your own question.

0
How much current and voltage has my resistor + LED
2
Source power with 2 V and LED with forward voltage of 2 V
2
constant current or constant voltage power supply to use with RGB shield with high power LEDs
2
Max current through an Arduino Mega?
1
Formula for current through shift register
0
Current Draw for LED Projects
0
LED on same Pin as Toggle Switch, not illuminating
0
Why does per-led current consumption diminishes when more leds are on?
1
LEDs not lighting up even though current is flowing through them, problem with ground?