I am attempting to build mocoLUFA under OS X el Capitan 10.11.6. 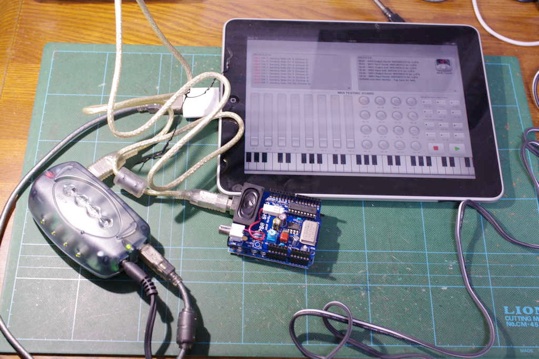 I am using the specified LUFA version (LUFA101122) and I have tried building with both brew avr-gcc and also Crosspack-AVR.

The problem I am facing isn't with the build or the install. It's just that as soon as I install the hex file, I get no midi messages at all.

I have tried downloading a custom-built mocoLUFA and I am able to install this and it works fine. I see midi messages coming across from my sketch.

My question is - what is the correct build environment in order to achieve a working mocoLUFA under OSX? I have tried both mocoLUFA and dualMoco and I get the same result with each.

My purpose for this is to modify mocoLUFA so that it can support sending MTC over USB. At present, it appears that mocoLUFA does not support System Common messages.

This is Franco, from Yaeltex, the guys who put up that site for custom MocoLUFA compiling.

Our site works on an Ubuntu server, and the build environment can be seen at the bottom of the site, which is as follows:

On the other hand, I use Windows 10 to build locally in my computer, and I have a similar setup with sligthly older versions of avr-gcc and avrdude:

Here is a link to the fork we made to mocoLUFA, it has minor changes, that were very useful to us and our hardware.

Regarding your problem, I am really lost on the cause of it, but we can start with some questions to get closer to a solution.

Let's start with these. Cheers!

I see that you are reading the MIDI messages from your iPad. If so, it is to be noted that LUFA reports 500mA for power requirements. So you could try self powering your USB-HUB.

Not the answer you're looking for? Browse other questions tagged arduino-mega midi avr-gcc or ask your own question.

1
How do I install the firmware on an Arduino Mega clone?
1
Interfacing an ATtiny85 with MIDI via Software Serial
0
Arduino Uno R3 (with Atmega 16u2) and MAC OSX 10.11 (El capitan) not working
1
ATtiny85 MIDI IN using SoftwareSerial - Is it possible?
5
16x2 LCD showing blocks under text
0
Using Teensy 3.5 (Arduino) to produce USB and Hardware MIDI messages simultaneously. Help?
0
DigiSpark AT Tiny85 compile problem?