Why do I end up with the display

Failed to read from DHT sensor!

in the serial monitor in most cases when I run the code given below? When I reduce the delay to 1000ms the reading shows 0.00 for both temperature and humidity which, as well, is pretty much false. Any help would be highly appreciated.

The article link by Nick is the same that I found, so it must be a well search problem.

What is described on the Intel forum is that the Galileo is not capable of direct communication with the sensor as it is a computer and not a microcontroller, so therefore lacks the ability for accurate timing required by the sensor and also the DHT* is considered a peripheral and would thus require a way to interface with the "PC".

What is described in the post is to use two pins to create the proper digital signal for the DHT.

The circuit makes use of a diode to protect the output pin.

The OP on the forum describes the connections like this:

Pin 2 of Galileo is connected to the data pin of the DHT11.

Cathode of the diode is connected to pin 3 of the Galileo.

Anode of the diode is connected to the DHT11 data pin.

The diode would be a standard diode, possibly a fast switching signal diode as the 1N4143. The resistor would be the standard pull up resistor of 10K Ohms.

Here is the OPs schematic: 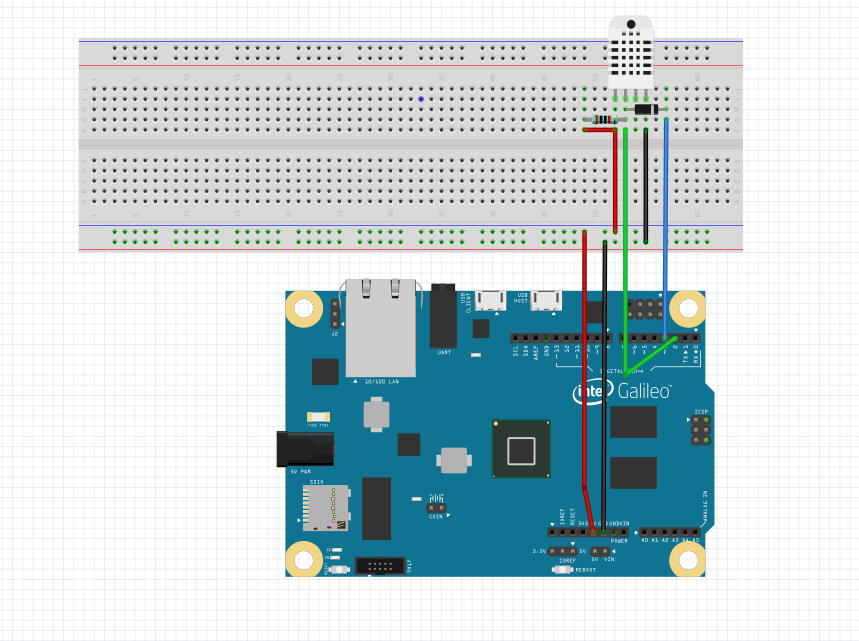 You will also need to make use of the code linked to by the OP in the linked post as it was modified to work with the workaround.