Wave file will not play with Teensy 3.5

I am attempting to play a wav file from an SD card using a Teensy 3.5. I am using this buzzer and I have the following code currently:

I don't know which pin is supposed to be outputting the PWM signal. I tried searching "patchCord1" to see what the parameters for it are, but was unsuccessful. The code was generated by The Audio System Design Tool.

As for the hardware configuration, I am attempting to wire the I/O pin to various PWM pins (to check for output) with no success. I have GND to Analog Ground and VCC to 3.3V (250 mA max). This is according to this diagram.

Which PIN is the Teensy supposed to output the pulses to?

I can get the buzzer to work by using manual PWM (analogWrite), so I know that it functions.

The documentation implies you have to combine pins 3 and 4.

Here is a circuit diagram: 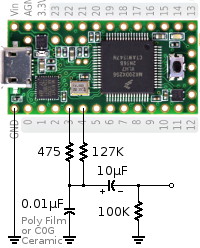 Not the answer you're looking for? Browse other questions tagged sd-card audio teensy or ask your own question.

0
Write to file in SD card in wave shield V3
3
Using TMRpcm library, the audio does not play
0
teensyduino with teensy LC: cannot include multiple files in sketch
1
Teensy 2.0 with MCP23017-E
0
Using Teensy 3.5 (Arduino) to produce USB and Hardware MIDI messages simultaneously. Help?
0
Reading text from sd card is returning weird characters?
0
Teensy not pulling down despite digitalWrite(x,LOW)
0
Python script not reading from serial unless teensy is rebooted