I bought a 20x4 I2C LCD from OddWires. (https://www.oddwires.com/20x4-lcd-display-with-i2c-interface/) It came with ZERO specs or documentation. After some hair-pulling I was able to figure out how to get it working. (I had to use the commands

To get the LCD working (The tricky bit was figuring out the pin assignments. They're not documented.)

I'm assuming this LCD unit is a lot like all the others out there.

It works, and If found the basic commands to clear the screen, position the cursor, and print text.

I've also found commands lcd.cursor() and lcd.noCursor() that let me show/hide the cursor.

I'd like to know if I can do things like blink characters between normal and inverse, underline text, etc using the standard LCD library (I've seen code that uploads custom character maps, so I assume I could upload an alternate underlined character set, but that sounds like a LOT of work for something I'm hoping is built in to the library.)

Can somebody point me to docs on the full suite of commands commonly available for these LCD units in the Arduino Newliquidcrystal_1.3.5 library?

(Sorry to be vague on the specifics of my LCD module. I did not get specs from the vendor, so I have had to guess as to how to use it.)

Often in software development, the code is the documentation. The merits of this are debated ad nauseam elsewhere.

As you have provided a link to the GitHub repository of the library you are using, you have all you need, though the provided utility/docs path doesn't fully document the I2C interface.

The function prototype (that is, the function, its return type, and parameters, but without the actual code) is found in header files which usually have the .h suffix.

Since you have an LCD with a I2C interface, you can look at the GitHub repo for the file LiquidCrystal_I2C.h

Within this file, you can see that the class is defined with name LiquidCrystal_I2C and has multiple constructors, each with a different list of parameters. The particular class constructor used is the one that matches the count and type called in your declaration of the object of that class.

The code in the header file is well documented. The first prototype listed includes good commenting:

This block shows the first 2 constructor options: With a uint8_t type that defines the I2C address of an I/O expansion module (which is what many "LCD backpacks" are -- that, or shift registers), and one with an I2C address, a backlight pin, and the polarity of the backlight.

Proceeding down, we find the one with 10 parameters, which is what you ended up using:

That last constructor is used to override the default pin mappings from the I/O Expander to the LCD. This is tricky -- what were the mappings based on? An I/O expander is basically a way to access multiple pins on an external chip through a single two-wire interface (I2C). How an LCD is connected depends on what pins of the I/O Expander are connected to which pins of the LCD. There is not a formal standard, though there may be convention.

Reading the GitHub page, you see that this is a

Clone of the new liquid crystal library from: https://bitbucket.org/fmalpartida/new-liquidcrystal

Following that link takes us to some kind of documentation, noting that one of the connection types is: 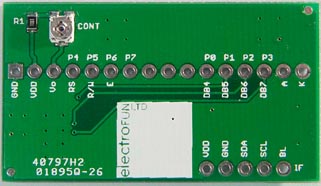 This is the point where you have to find out if the I/O expander on your purchase has the same pinout as the product for which this library was written.

This indicates that the I/O expander on your LCD does not have the same pin connections as that for which the library was written, which is why you had success only when remapping them in the constructor.

All that to just re-state the hair-pulling you had to do!

The actual functions available are noted to be:

This library provides the same interface to applications as the LiquidCrystal library sourced by the Arduino SDK.

But to be absolutely sure, you can also see their prototypes in the header file: https://github.com/fmalpartida/New-LiquidCrystal/blob/master/LCD.h

Not the answer you're looking for? Browse other questions tagged i2c lcd or ask your own question.