I'm making a simple Infrared detector using a thermopile. I have a few extra capacitors than what that schematic says. I'm currently following another, but this is the gist. 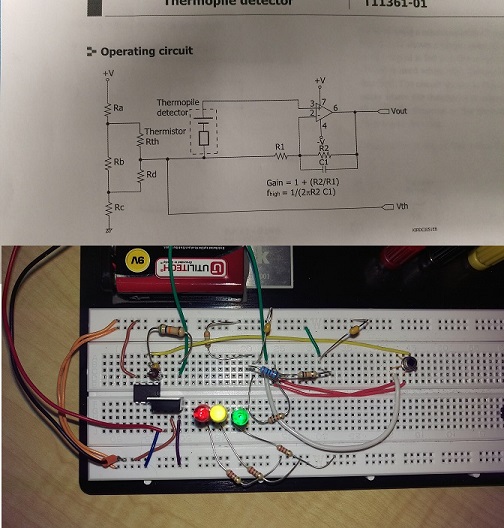 I can add breadboard picture if needed. I don't have 10 points in this Stack so I can't post more than 2.

I'm using a 9V battery through a 24v - 5v regulator (had one around) to power my op amp and schematic. The signal from the OPAMP will be between 0-5V so voltage hasn't damaged the Arduino Uno. The final project will be something like: output > A then power green, A < output < B power yellow, B < output red.

The issue is that I'm getting an oscillating value from my Serial Monitor that goes from 0 to 1023 (or I have a conversion to change it back to output voltage. So 0V to 5V. See code).

It does this oscillation when I have the board connected to any of the AX pins (X=0-5) or nothing plugged in at all (I understand it will output weird numbers with the pin floating).

I had a picture of the serial monitor but I don't have 10 points to add more than 2 pictures. Please see image below

I know that the output from the OPAMP works because when I use a VoltMeter to read the output, it works fine. 0.3XXV when no flame, 5V when flame is directly on top of my theromopile. 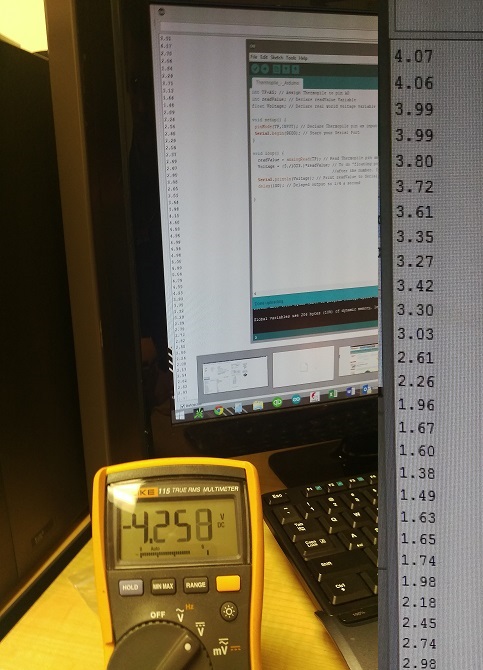 Would anyone happen to have a suggestion to why the Arduino is acting this way? The volt meter reading is directly out of the Op amp pin 1. no more than 2 links. AD822 op amp

Here's my code before adding if statements for the LED's. It was incorrect.

Here's a couple of diagrams that I drew for another question which deals with the Arduino driving a remote device, but the theory holds true no matter which way around it is.

Not the answer you're looking for? Browse other questions tagged input or ask your own question.