I accidently bought a "Common Anode" 7-segment display instead of a "Common Cathode".

I understand that the polarity of the leds within the display is 'reversed'. So instead of putting the common pin on GND I have to put it to 5v (with current limiting resistor)

My questions on this are:

Obviously I would like to have wiring more like this (but then I would ofcourse change the GND line to a 5V line. 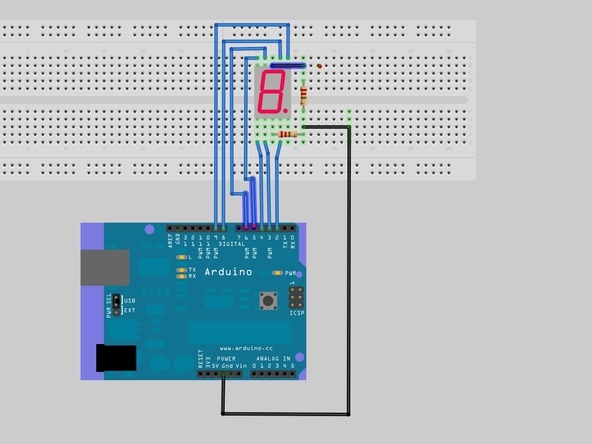 The wiring below is the worst-case wiring I can think of. 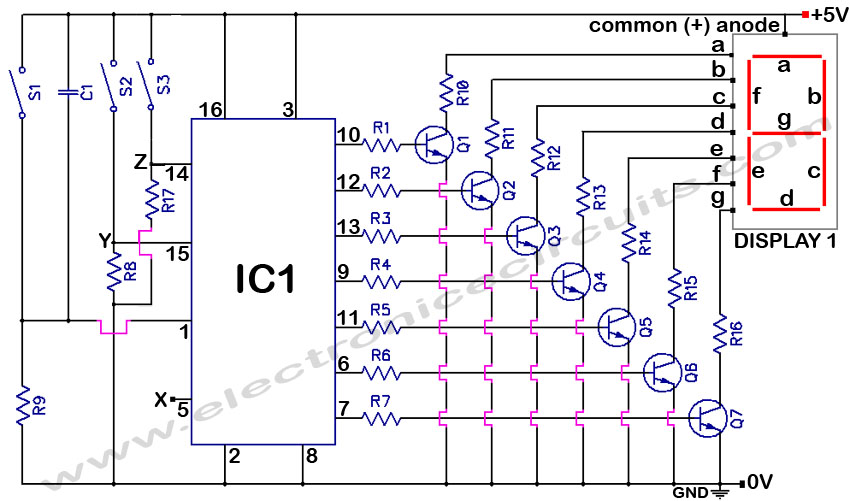 You can use a single resistor on the common pin if you want. The problem is that lighting up multiple segments at the same time will substantially reduce the brightness of each one. You could work around that by lighting each segment one at a time in very quick succession though.

It should be possible to control the display directly from the IO pins by setting them LOW. In this configuration, they will be sinking current (rather than sourcing it). It depends on the specification of the display and on what resistor you use though.

Basically, try to keep the current below 20mA and it should be OK (assuming you're using a standard 5V Arduino). For example, if each segment has a forward voltage drop of 2V, you would want to use a resistor of around 180 Ohm.

Controlling the display directly from a shift register is probably not possible, although once again it depends on its specification. Shift registers usually aren't designed to sink enough current so you'll need something like a transistor on each output.

Sorry about the crudity of my image, but you don't always need those transistors. Peter has already said so, but I wanted to explain a bit further. 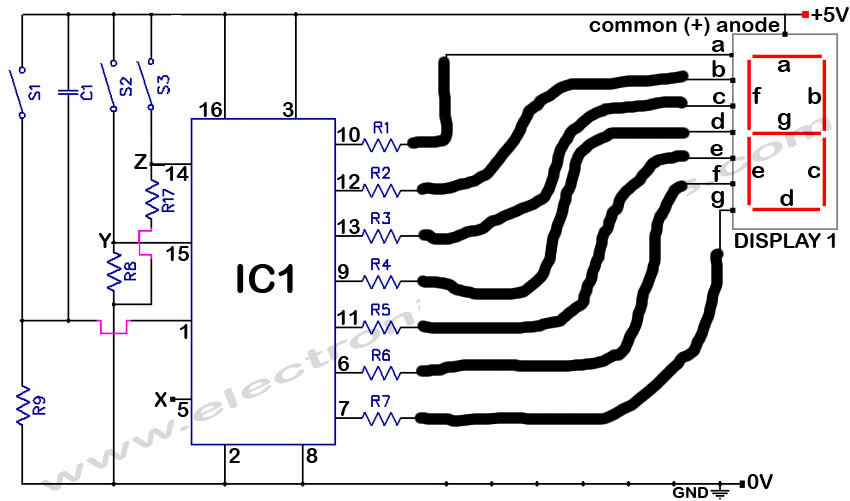 The only thing is that you need to set a pin to LOW to light up the led, and HIGH to turn it off. Just use a ! to make your code more intuitive if your like. So e.g. digitalWrite(segmentA, !HIGH)

Some limitations. A pin can sink up to 40mA (no problem here), but the total sink current for the digital pins 0 to 4 shouldn't exceed 100mA. The same goes for pins 5 to 13. And the same goes for the analog pins. So either limit the current through the leds to around 10mA, or make sure no more than 5 leds are lit at the same time, or connect half of the segments to on of the above mentioned groups, and the other half another (f.y.i. analog pins can be used just like digital pins).

Peter and Gerben have already said what is needed , but I wish to explain things even further.

Not the answer you're looking for? Browse other questions tagged led electronics or ask your own question.

0
Arduino on attiny85 driving 4-digit 7-segment using two 74HC595N shift register not alternating fast enough
6
LEDs: difference between common anode and common cathode?
8
How to use a common anode 7-segment, 4-digit display?
0
Controlling common anode RGB LED with PWM - Can individual colors be done w/o transistors?
1
Why is Arduino Pro Mini not powering this LED?
0
LED on same Pin as Toggle Switch, not illuminating
0
Detect if laptop is on or not?
0
24v LED strip with common anode?
0
What to use to Drive: 16 Segment LED, 4 Digit, Common Anode (4 sets)