How to monitor 12 V LiPo charging from Arduino

I see a ton of 12 V LiPo batteries like this being sold on eBay and elsewhere. 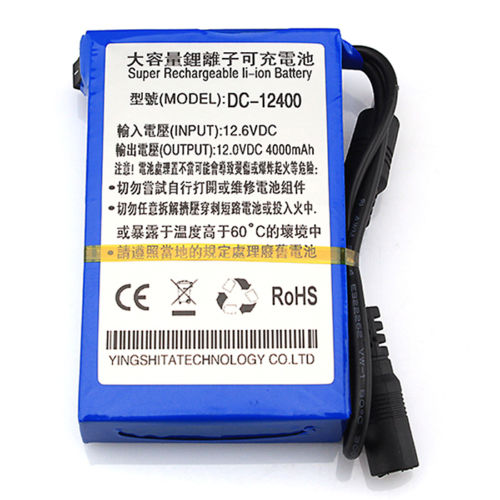 I've found a few LiPo charging circuits specifically designed for the Arduino, but they all can only handle 3.7 V cells.

I'd like to avoid having to disassemble the battery or modify it to allow me to monitor its state. Is there an easier way, like connecting a battery lead to an analog pin and measuring voltage, or using a coulomb counter?

If you want to buy something off the shelf that will provide power for an Arduino, try a power bank - they have USB out, and are also charged via USB. I found that I had to put a 100 Ohm resistor to stop mine going to sleep, but it's +5V native.

A 100 ohm resistor (0.25 watt at least!) draws 50mA, so a 5200mAH powerbank like http://www.dx.com/p/universal-5200mah-external-li-ion-battery-charger-power-bank-w-led-indicator-usb-cable-pink-362725#.VQneCnWjlIc would leak it empty in 104 hours. If you use at least 50mA at all times, then this isn't needed - I think an Arduino draws 35mA already, so you should get away with a 300 Ohm resistor, drawing 16mA. Some experimentation might be needed.

Use a 10V zener diode. Check it’s voltage drop, and use that in your analogRead logic.

Get the full voltage with a DMM, and also the low cut-off voltage.

Not the answer you're looking for? Browse other questions tagged arduino-uno battery or ask your own question.