I recently noticed how the map() function in Arduino was bulky in both terms of flash space used and time taken to execute, largely because it deals with long and involves a division and multiplication.

Many times you can replace maps with more basic functions i.e.

I have one line in some code that says:

How could this be simplified so that it is both space and time efficient?

I'll allow slight differences in output values if it results in a much better solution. 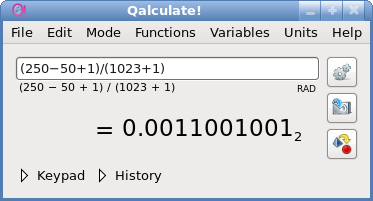 The screenshot shows a base-2 (i.e. binary) result of calculating the constant part of a mapping. You can approximate this multiplication by a constant by a number of shifts added together. You need to break down each multiplication in the result first:

Then add these together. You are essentially breaking it down into convenient base-2 multiplies (which can always be represented by shifts) and adds - nearly always more efficient.

This doesn't get you right to 250, but pretty close:

Do all your processing with a left-justified int (ADLAR=1) though, to minimize errors. The ADC returns a 10bit result, and ADLAR choses if this is aligned to the left or right of the two result registers.

If you want full range, you can try throwing in rounding

You could approximate it quite closely using only two integer operations:

That effectively maps input range 0 - 1023 onto output range 46 - 250, so it's fairly accurate. If LDRreading is a 2 byte integer type then it should be significantly more efficient (comparatively speaking) than anything which uses long.

If the input range is limited in size and you have the memory for it nothing beats a simple lookup-table.

You can pre-compute the content in a part of the program that isn't time-critical or just compute the entire table-content beforehand and put it verbatim in the source-code.

Doing a map is just a read of map[] with the original value as index.

If you input range starts with a non-zero number just decrement all inputs by the lower-bound value so you have a 0-base index for the map array. (That works for negative lower-bounds too !)

At most 1 substract (to adjust for a non-zero lower-bound) and 1 addition to calculate the array-base + index.
And a good compiler will be able to optimize it further.

You can't get more efficient than that, but you do need the space to store the table somewhere.

Not the answer you're looking for? Browse other questions tagged map code-optimization or ask your own question.

0
Does the map() function works on an ATtiny85?
4
Why is the constrain function used after the map function?
0
How would I refactor this code, given how similar most of the lines are?
2
Explanation of the formula of the map funtion