My robot car won’t respond to my command. The code below worked before however, this time there is no response. I’ve tried experimenting with the code in the first while loop. I’ve tried different code from other projects similar to this. I’ve played with the schematics however, nothing seems to work.

This is my code:

And here are the schematics: 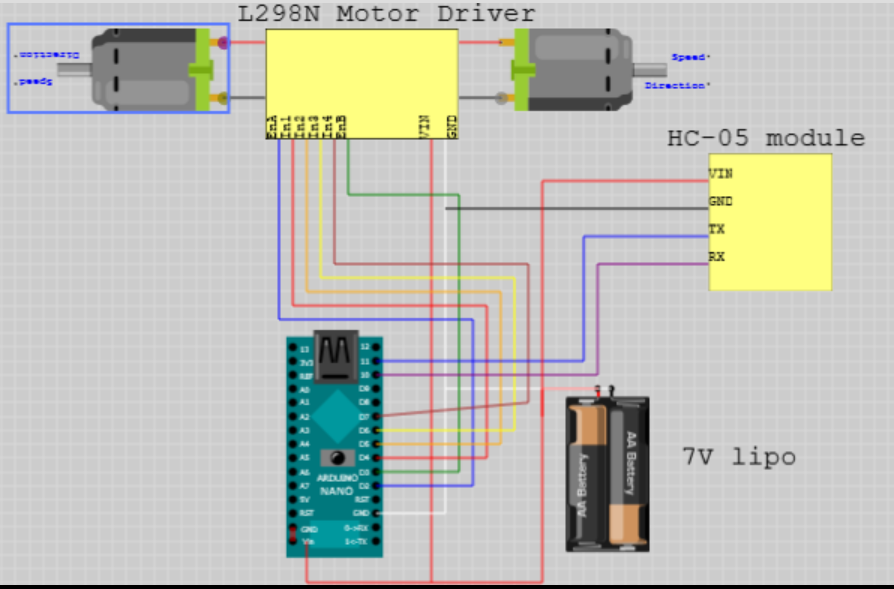 In short, among whatever other problems you might have, you've wired your TX and RX connections backwards according to your diagram and code. Swap them either in hardware or in software.

According to the documentation:

You've constructed your SoftwareSerial object as:

Defined your pin variables to these pins:

A variable name like bluetoothTx can be confusing if you're not sure which thing is doing the transmitting. Is this the pin number for transmitting to Bluetooth or the pin that will be connected to the Bluetooth transmitter (in other words, for receiving)?

In some cases I just describe the situation in the variable name:

I dunno that I'd go with a name quite that long, but you get the idea.

I'm swapping them in software here, leaving your physical connections as they were in the diagram mostly because I don't feel like redrawing your diagram. Though, if it were my project I would swap the wires (and defined pin numbers above), because the convention is to have SoftwareSerial receive on 10 just like hardware receives on pin 0 and to have SoftwareSerial transmit on 11 just like hardware transmits on pin 1; in order words, keeping the relative order of the pin numbers.

So this is what you have with the above code:

Transmitters connected to receivers. If you get confused build your own table and make sure your variable names make sense.

This has nothing to do with our question really, but: Most Arduino users, new ones anyway, are better off with an Arduino that has connectivity that displaces the need for SoftwareSerial. A minimal change from the Nano for what you're doing is a Micro or Pro Micro board. That board has native USB support which it uses to send "Serial" to the computer. That leaves the one actual hardware serial peripheral on the (Pro) Micro available for you to to connect to HC-05 (or whatever). There are a pile of options, including ones that just do Bluetooth also (without need of HC-05). Anyway, there are lots of ways to not use SoftwareSerial.

Your answer was part of the solution!