Trying to understand stepper behavior, and I have some specific questions

The application is simple: raise and lower the end of a roller. Wait for a signal from the sensors, wait for a time to see if the issue fixes itself and if it doesn't, turn 300 revolutions CW to raise, CCW to lower; wait; if we still have an issue, turn 150; issue fixed, return to zero.

It all works the way I want it to, except for the speed and direction of the stepper. NOTE: this is with the motor not attached to anything. NO LOAD.

Any delayMicroseconds value below 650 or above 1200, the motor jitters or vibrates but doesn't turn. When it does spin, the motor changes direction between spins, and as we get near the top of bottom of the range, it'll even change direction mid-spin.

The driver is set to 200p/rev and 1.5a. (I played with microstepping and higher amperage, but it didn't make an appreciable difference.)

Before you enthusiastically recommend a library, I've worked with both AccelStepper and Stepper (the default Arduino library?), and neither were as reliable or predictable as the code above.

I would like to be able to use AccelStepper, but the ac/de-celeration ramps have the same symptoms as my simpler code: between 650 and 1150μs, everything's fine, anywhere outside that range is not.

What don't I know? What am I missing to be able to turn slower and/or faster than that narrow range? Why does it change direction mid-spin or between spins? 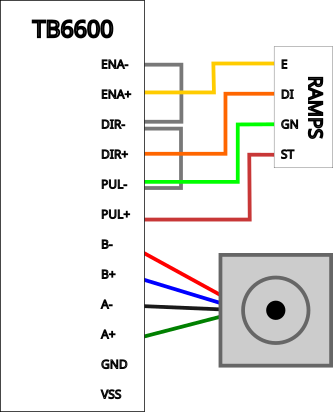 Browse other questions tagged arduino-mega stepper-motor or ask your own question.

1
Ways to turn a knob with a stepper motor and an ATMEGA32u4
1
Accelstepper run stepper backward
1
How can I increase the responsiveness/speed of my stepper motor?
1
Stepper motor won't change directions!
1
I am trying to automate my sun shade on my back porch with a Nema17 Stepper motor