How do I listen for a sound that matches a pre-recorded sound?

I'm working on a project that uses an Arduino Uno to listen for a bell ring and then uploads to a web server the exact time the bell was rung using a WiFi Shield.

I want to know how I can listen for the bell ring (a three second long high pitch tone) and be able to detect that that's what the Arduino heard. I think the best way may be to pre-record the sound and then the Arduino will constantly try to match the incoming sounds to the prerecorded sound. I'm wondering how I could go about doing this (or are there better methods).

About the simplest starting point is to use an FFT (fast Fourier transform) library (like ArduinoFFT at openmusiclabs.com) to characterize the spectrum of an audio stream.

[Edit: An alternative method (digital bandpass filter) is mentioned below.]

Audio typically is made up of many frequencies of many amplitudes and phases, mixed together. FFT sorts some of that out; it estimates the amplitudes of the various frequencies that make up a bit of audio.

The general idea is to use an Arduino ADC to take readings of an audio voltage for a fraction of a second, then use FFT to convert the large set of readings to a small set of numbers, in eg a set of 32 or 64 frequency-bins, to represent amplitudes in given frequency ranges. For example, if the sound during a sample is a mix of five sine waves at five frequencies, the bins those five frequencies are in should have large numbers assigned, while other bins should have small numbers.

The approach would amount to sampling at 10KHz for 0.1 second or so, computing an FFT with 32, 64, etc. bins in the next 0.1 second, and comparing bin counts to a training pattern. Whenever bin count patterns match reasonably well, start a three-second timer; if several seconds of matching samples occur, declare a match.

If the bell is electronically generated and mostly a mix of pure sine waves, then its sound will have an easily recognized spectrum. But if the sound source is buzzy and there is background noise, it may be difficult to compare spectra. See eg
• Comparing an audio signal with a previous 'taught/profiled' signal
• How do I compare chords played on a guitar with a known sample?
• How do I compare 2 audio files, returning a percentage of difference
• What does the phase of a FFT bin of an audio signal represent?
• Sound pattern matching using Fast Fourier Transform in Windows Phone
• How do I go about detecting whistles, pops and other sounds in live audio input?
• The Frequency Domain Section 3.4: The DFT, FFT, and IFFT

Digital bandpass filters are based on processing a signal in a way that detects the amplitude of the signal's frequency component within designated limits.

You can use MatLab or Octave to do most of the work of designing a filter. For example, if you have the Signal package installed and loaded into Octave, commands like

will compute coefficients for a Constrained L2 bandpass FIR filter, plot the freqency response (as below), and display the 60 coefficients. To use the filter, copy the 30 non-zero coefficients into a program, set up a rolling array of readings, and at each sample compute a new filtered value. If at some point high filtered values occur, and if they recur for about three seconds at the bell's frequency or twice its frequency, then the bell is ringing. Note, there are other kinds of bandpass filters; the Constrained L2 bandpass FIR filter is shown for convenience, but other kinds may be better. 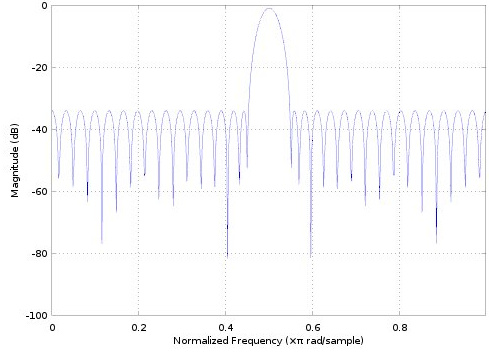 If you are unfamiliar with signal processing, you might need to try the following approach:
1, On your development system, obtain a few seconds of audio to use for tests. (Eg, allocate two buffers of several dozen bytes each; fill one buffer while using the other buffer to send data from the Uno to your development system. Use (eg) Serial.write(buf, len) and a high data rate, eg 115200 bps, to send binary data, with three ADC readings packed per four bytes.)
2, Use Octave or similar software to try out several different FFT or filter approaches. You would use FFT to determine the bell's fundamental frequency and then could try out digital bandpass filters while developing a recognizer. You can also use mkfilter to design filters to try out in C programs on your system, and should be able to iterate more quickly while developing your approach than if you were developing it using the Uno. When you get satisfactory results on your development system, you then can code a sketch to test the technique on your Uno.

Note, for a given filter order, filters implemented using fixed-point integer arithmetic on an Uno can handle more samples per second than those implemented using floating arithmetic. An Uno might support 50000 to 100000 floating multiplies and adds per second (1,2,3,4), vs. two to four times as many fixed-point operations per second. If your filter uses a dozen floating point ops per sample, your sample rate probably would have to be under 5000 samples per second. If it uses half as many floating ops or uses fixed point instead of floating point, your sample rate could be twice as much.

1
How to send Json to a webservice from pc/RPI with live data from Arduino(serial)
1
How do I use this sound sensor?
5
Using / calibrating pH sensor module
0
Algorithm to detect motion using ultrasonic sensor
1
How do I use Sound Sensor LM393 + Speaker in Arduino
5
Pre-heat time required for MQ-5 gas sensor
0
Looking for a sensor that measures heart/pulse rate
2
Maze solving robot turning failure due to sensor distance to the corner increasing during the turn
0
How to use any module that has no library for arduino?