Back EMF from Relay causing trigger on INPUT pin

I am wiring up a light show for my pickup truck.

I have installed various high power spotlights and light bars into a dedicated relay/fuse box in the engine bay. These relays are wired into a switch panel in the dashboard and work beautifully using the manual switches.

I have subsequently set up a brain...

I have set this up to start a sequence from an RF button, and programmed the Arduino to fire the relays, including strobe, which was working great on the LED's I attached while testing.

However, when I wire them up to bridge the switches on the dashboard (in turn firing the relays in the engine bay), the Arduino receives a positive signal on INPUT_PULL Pin 2 after a couple of flashes. I think this is something to do with an interference caused by the back EMF from the relay coils in the engine bay, possibly striking the relay module causing it to fire the interrupt pin 2 and causing a reset.

Looks like I need a snubber. I think the best answer is to install a flyback diode across the coil on the relay in the engine bay, but have been trying to figure out how I can wire these up within the blue box, without dismantling the relays installed in the engine bay. I thought maybe I could connect general ground to the manual switch (long route of achieving the same circuit), which helped but after a few more flashes the Arduino gets a signal to reset again. I have lots of diodes and RC Snubber circuits from Amazon which I was going to try, maybe across the Module Relay contacts.

This is a circuit for one of the eight lights.

Please advice how I can reduce this interference using snubbers or some other modification, ideally within the blue box. 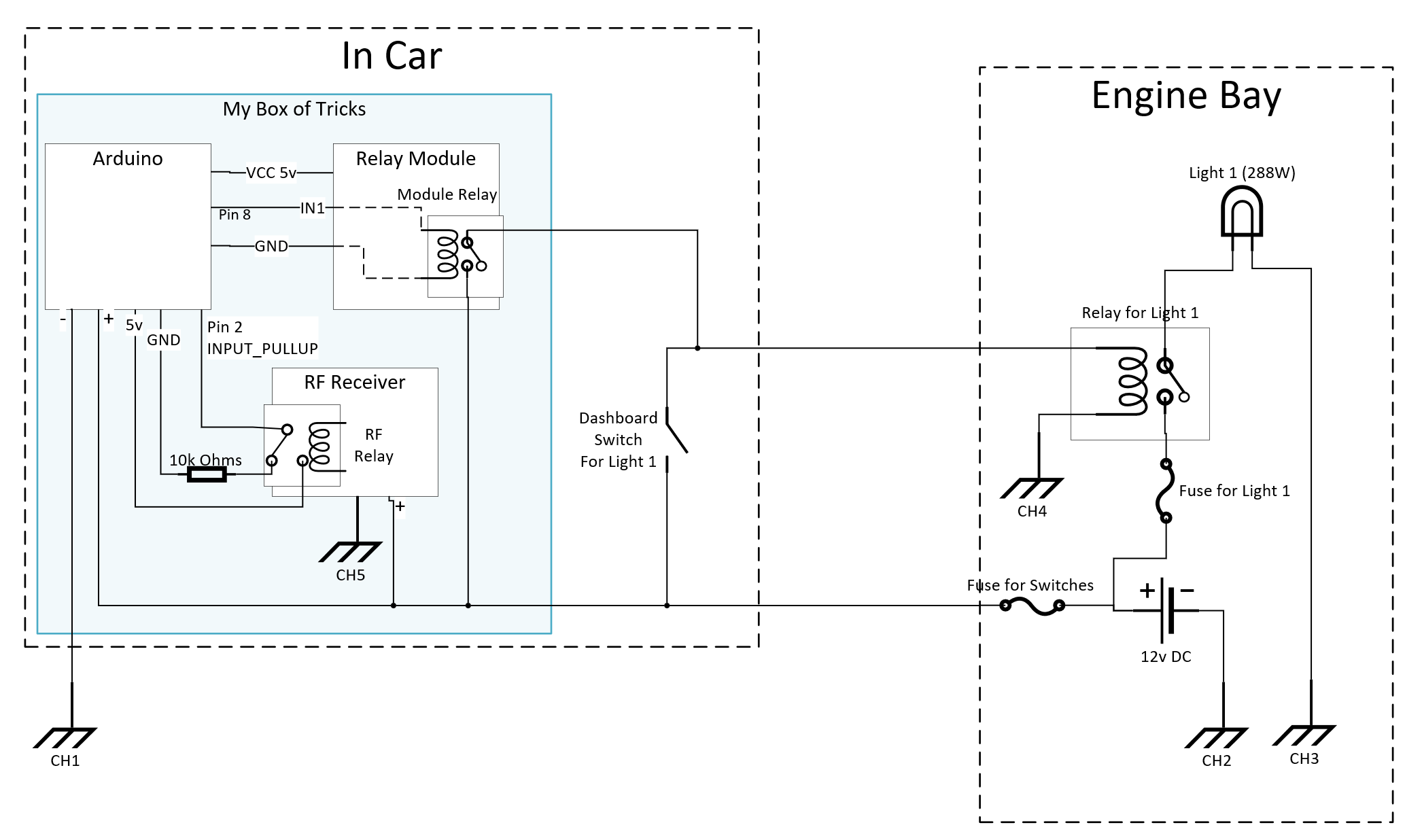 I have managed to get a working setup by removing the resistor and the 5v feed to the RF Relay. Also adding a Diode from earth to the top side of the Module Relay connector. See updated circuit below. Seems to be working, though I'll have a go at adding RC Snubbers as suggested. 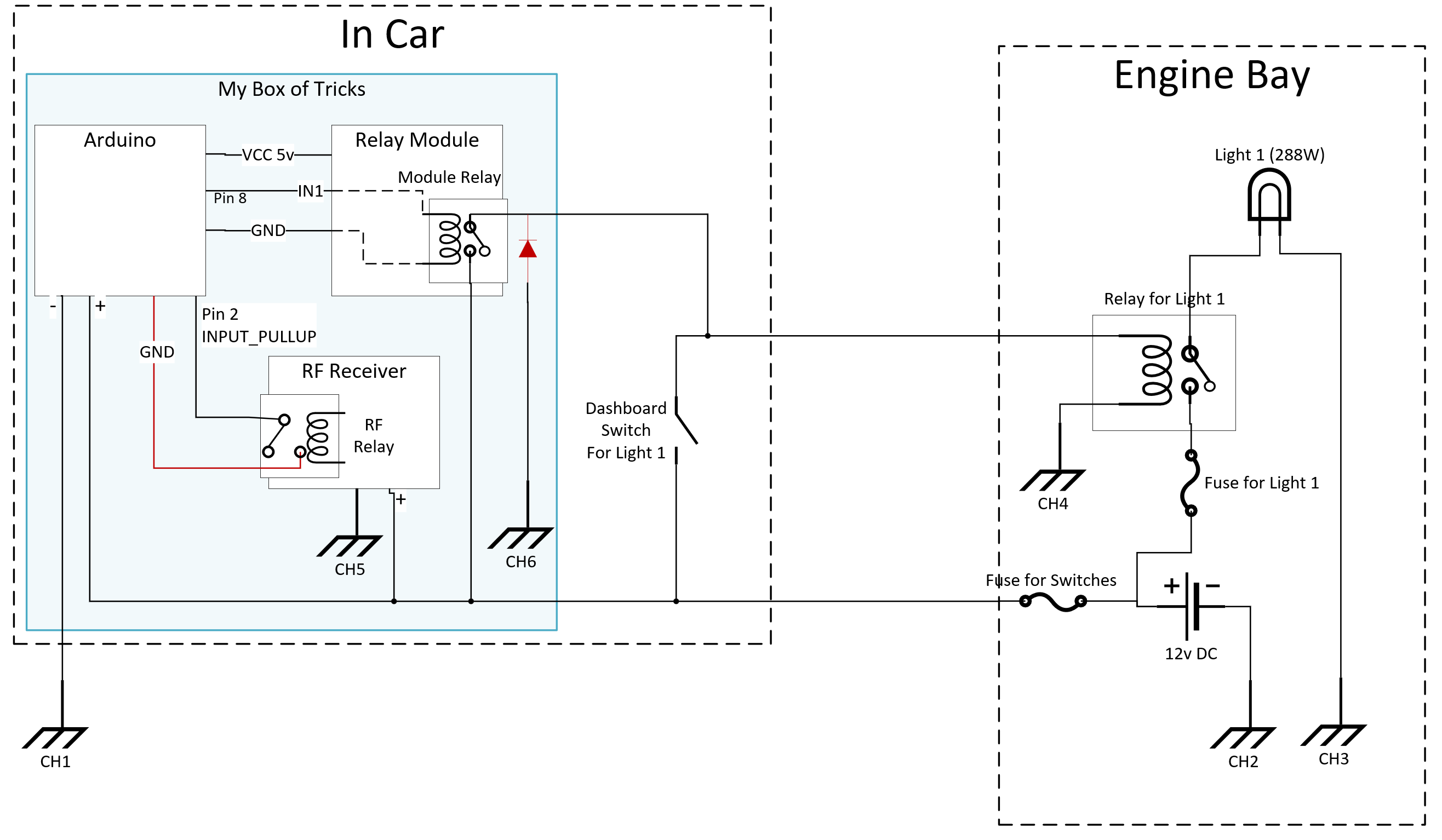 There are two things to tackle in your schematic. First is snubber networks. These are used to aid in the prevention (or rapid extinguishing) of sparks between the contacts of switching gear (like relays). You should attach one across the contacts of each relay. It is these sparks that create most of the "airborne" EMI.

A diode across a relay's coil only deals with "wire-born" EMI (in the form of induced back-EMF) and has no relevance in your circuit due to the galvanic isolation of the first stage relay and the driver circuit in the module.

The second, and more important, thing to deal with is your input pin. Firstly the built-in pull-up resistor is very very weak. It's usually around 30kΩ, and that is very easy for "airborne" EMI to overcome. You should avoid using it. Instead an external pull-up resistor of no more than 10kΩ (I'd recommend 1kΩ as a good value) should be used.

Secondly you have a 10kΩ resistor in series with your switching contacts. This will not be helping to get a logic LOW level when the switch contacts are closed since it forms a resistive divider with the pull-up resistor. As it is it happens to just work with the internal pull-up, since the internal pull-up is greater than the 10kΩ series resistor. Reduce the pull-up with an external and that will no longer be the case.

That 10kΩ resistor should be removed completely.

Here is your circuit with modifications in red: 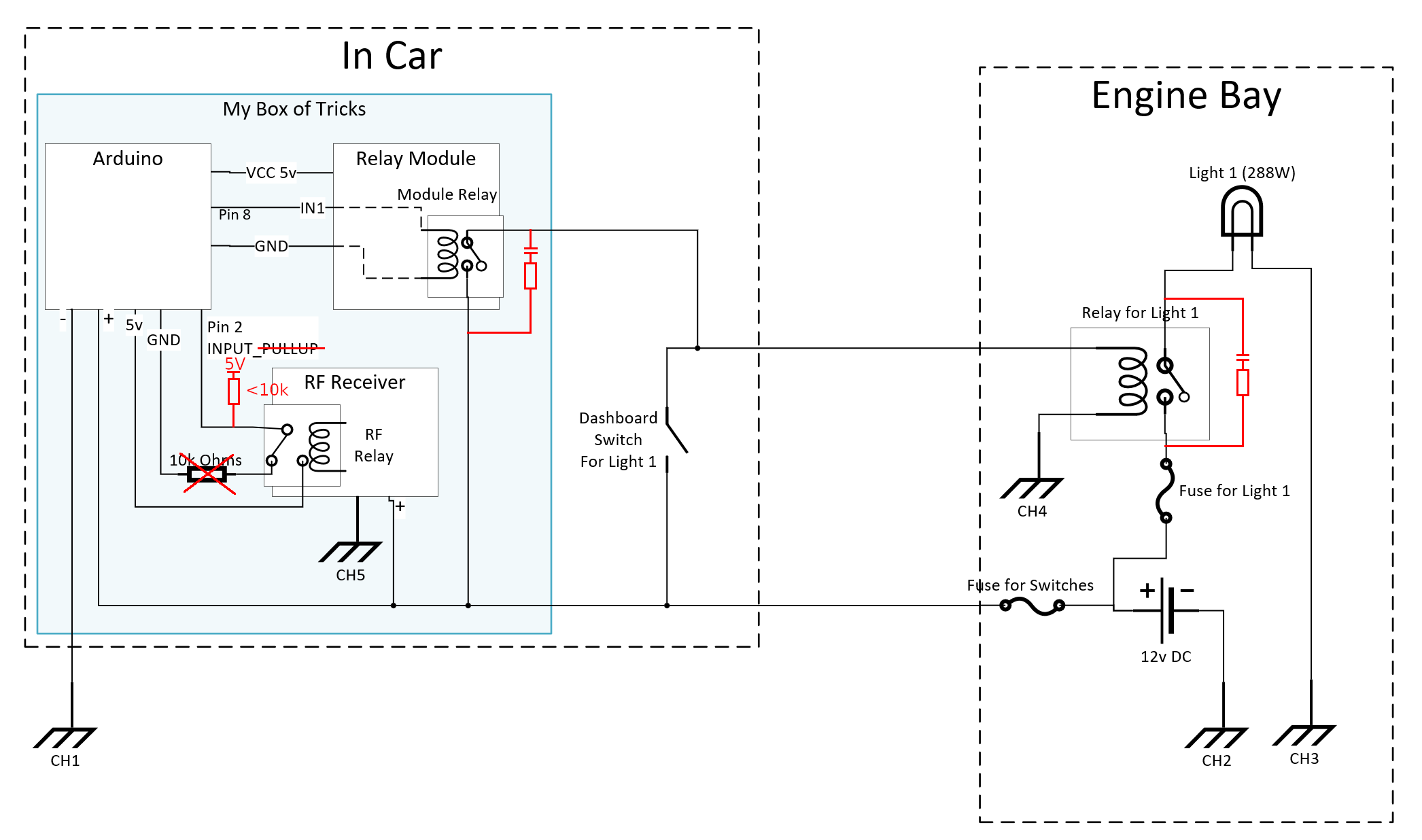 Here is a general idea of a MOSFET alternative for switching the light on and off. 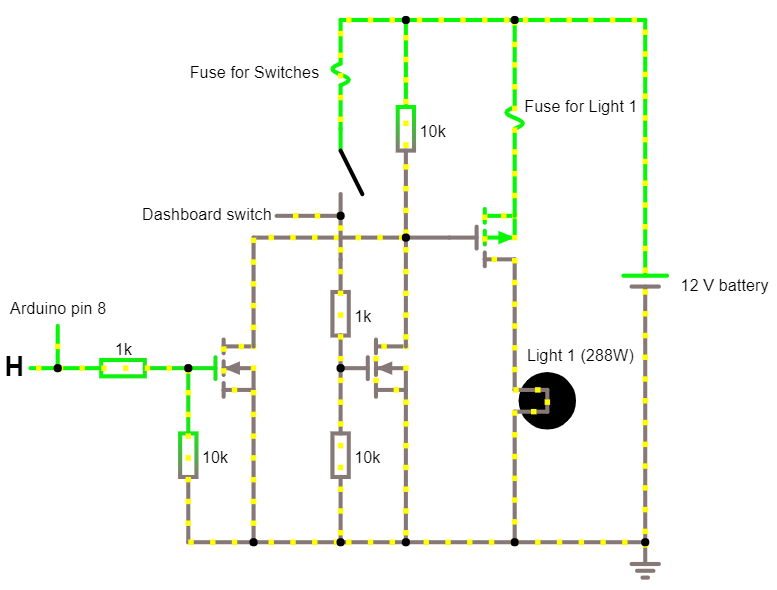 You can click the switch and the H/L input to see how it operates while running the simulation.

The p-channel MOSFET in series with Light 1 could be FQP27P06.

The n-channel MOSFETs are of much lower power.

Using MOSFETs eliminates both the RFI/EMI interference from sparks across relay contacts and the surges/noise from the collapsing electric field of the coils of the relays.

Not the answer you're looking for? Browse other questions tagged arduino-uno interrupt relay or ask your own question.