ATMega4809 via Nano Every marked as 20Mhz, but does this confirm it is actually at 16Mhz?

If you go to the official Arduino Nano Every page and click the Tech Specs tab, you'll see that it lists it as running at 20Mhz. 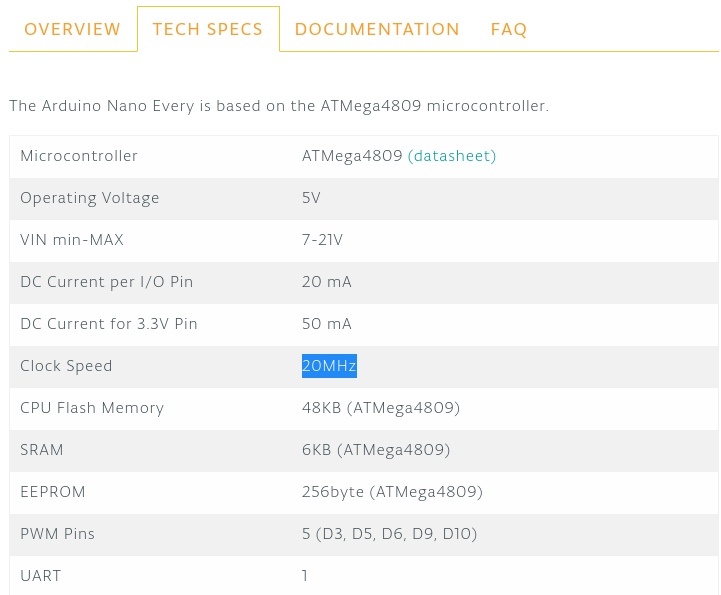 However, if you go into the Arduino IDE and go to File...Preferences... and turn on the Show Verbose Output during: compilation then you can examine how the board is actually set when a program is uploaded. 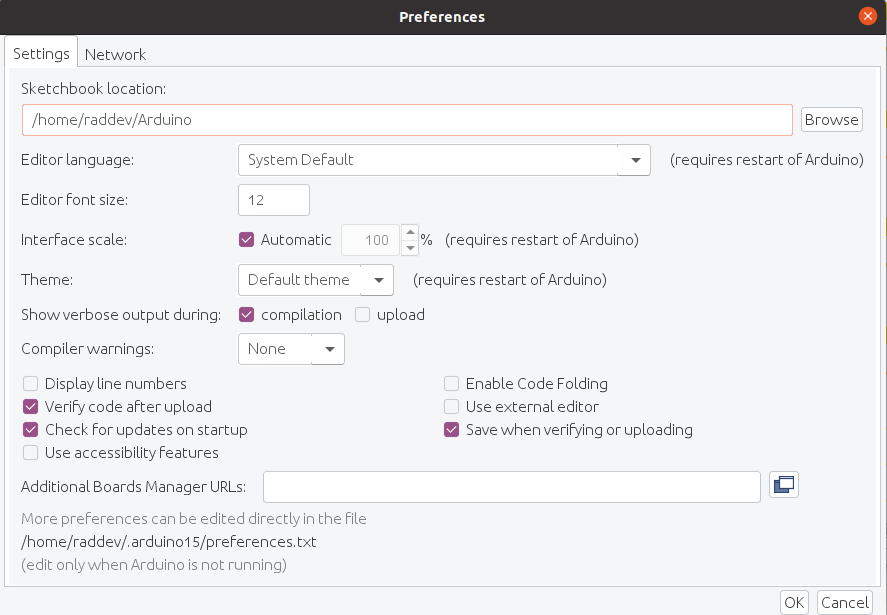 When you look at that output you will see that it seems to be setting the board to run at 16Mhz.

Am I Looking At This Properly?

It looks to me as if the board is actually set to run at 16Mhz, right? Am I looking at that properly?

I'm attempting to confirm this because I am :

The ATMega4809 datasheet states the following: 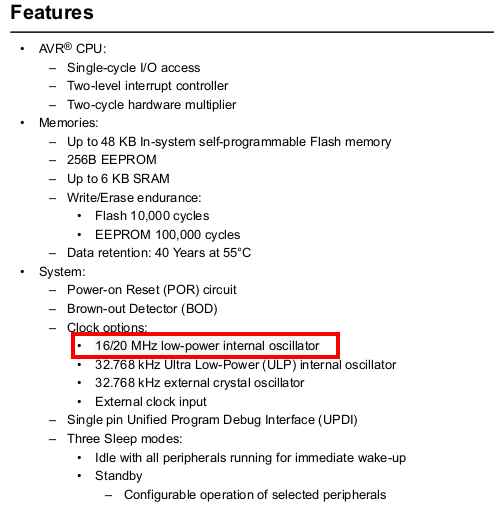 If I upload that sketch to the ATMega4809 40-pin chip, that means it will expect to run at 16Mhz, right?

Will the 40-pin chip be set to 16Mhz by the HEX file or will I need to set fuses on the chip to insure the chip is running at 16Mhz?

FYI - Compiled For Correct Board

Also you may wonder if I had the wrong board selected when I compiled, but here you can see I chose the Nano Every. 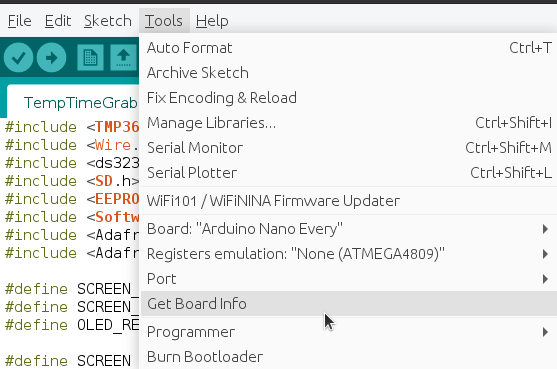 With the Nano Every they went out of their way to make it look like as much like original Nano, to the point of providing that "register emulation" feature to make it appear that it has the 328P's older style of GPIO registers. Running at 16MHz just make sense if you want to behave like the common Nano as much as possible.

If you want to convince yourself that it's running at 16 MHz, you can blink an LED with causes of __builtin_avr_delay_cycles(16000000); in between. This busy-waits for the requested number of cycles. If it's running at 20 MHz instead of 16, you would see something faster than a 1 second delay.

They keep the configuration fuse values in a file fuses_4809.bin. On further investigation, it's not entirely clear what that file is for, despite containing the correct values. The actual OSCCFG value being used (which is the same in the file) is defined there directly in the boards.txt: 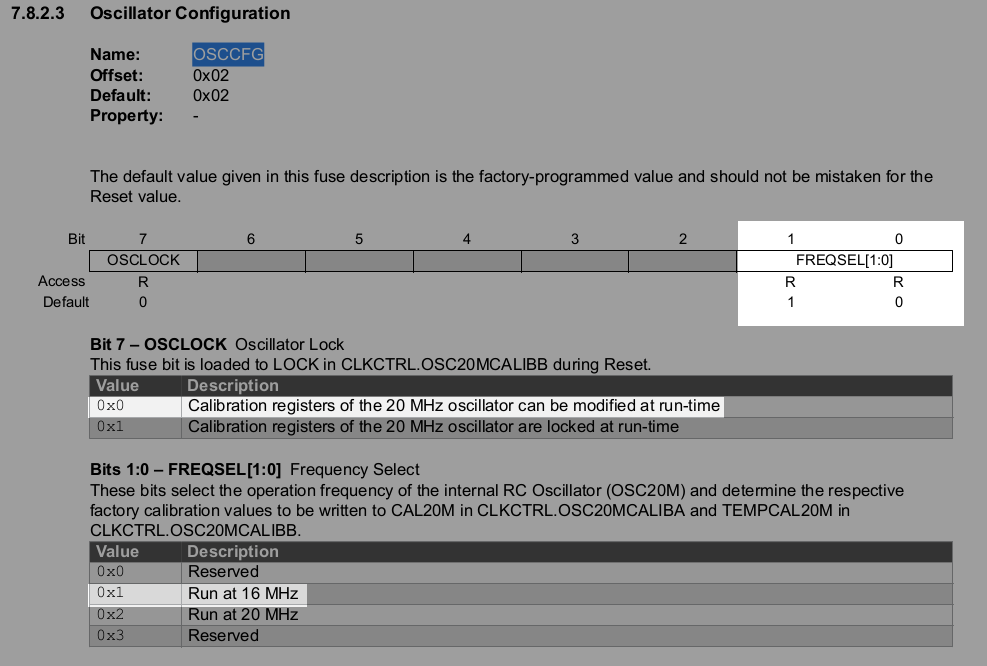 So you can see it's set for 16 MHz on the Nano Every. The -DF_CPU in the command line originates from a line in boards.txt for the Nano Every:

and works its way into the compile command-lines via a line in platfrom.txt:

The D_CPU macro exists to inform the compiled code what frequency it will be running at. The OSCCFG is controlling the actual frequency, it's important that they agree for any timing related code.

When you upload it's the "-Ufuse2:w:{bootloader.OSCCFG}:m" that becomes "-Ufuse2:w:0x01:m" in the avrdude command line generated from the upload recipe in platform.txt that has the actual effect of configuring the chip for 16 MHz.

If you really wanted to run at 20 MHz, you could try tweak the definitions of these, but it probably makes more sense to look at something like MCUdude MegaCoreX which appears to have a board definition for the ATMega4809 at 20 MHz.

Not the answer you're looking for? Browse other questions tagged arduino-mega arduino-ide frequency atmega or ask your own question.

0
Change from using the external crystal to the internal oscillator
1
Standalone ATMEGA328: Verification mismatch on random byte on -subsequent- uploads only
2
Why are there two sets of tools and bootloaders in the Arduino IDE?
1
How to determine which pins_arduino.h file is used?
0
Can I program a 20MHz Attiny85 with the 8MHz Internal Clock option in the Arduino Software?
4
Unable to upload sketch using Platformio (but Arduino IDE works)
0
Trouble programming custom ATMEGA2560 board
1
Nano Every clone with ATMega4808 not recognized
2
Programming ATMega4809 via Atmel-ICE with Hex File from Arduino IDE - why doesn't the code loop / work?