My Arduino UNO works, but 2 smd overheats. Why?

I can use my Arduino with the usb plug, but 2 smd overheating when I plug into the computer, But when I use the DC plug, the leds on the Arduino barely visible (for example the "ON" led), so the arduino is only works with the USB plug. 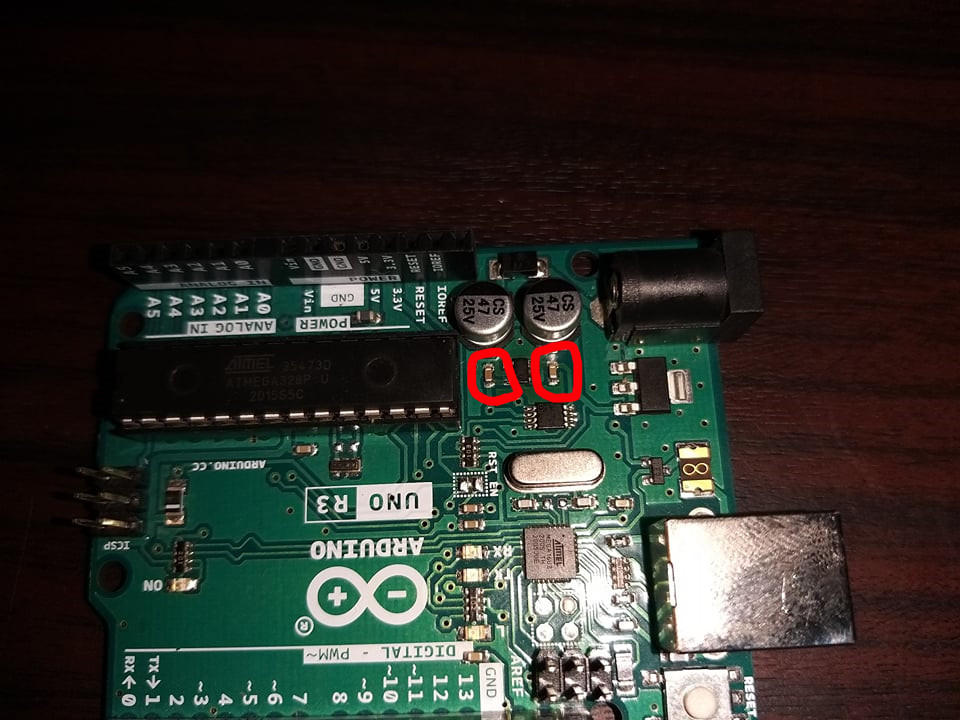 These look like C2 and C3 in the Arduino UNO R3 schematic. It sounds like both are internally shorted.

Assuming that's true, why it would work (partially anyway) on USB but not external power would depend in part on what external voltage had been applied. The voltage seen on the board, and therefore the brightness of your LEDs, depends on the voltage being dropped above their source. That is, it depends on what's happening to the PTC fuse and in the USB host port and cable etc for USB. And in the linear regulator and similar current limiting in series with it. Probably the thermal overload protection in your regulator is shutting it down so hard that the LEDs don't even light. Or whatever event cause this problem happened while you were externally powering it and there's now an open somewhere on the side external powering.

This seems to be the 3.3V regulator. If you're not using 3.3V, you may be able to get a soldering iron and through-heat the capacitors and scrape them off the board and see whether or not the rest of the board, the 5V section, works fine. Before you do that you may want to measure the 5V and 3.3V lines and write down what you get. One or both are probably low. Take note of the USB source you're using. Try taking off the capacitor off the output side of the regulator first, see how things go. Then go for the input side one. From the sounds of it both are bad though. But it can't hurt to go methodically.

Not the answer you're looking for? Browse other questions tagged arduino-uno usb or ask your own question.

3
Arduino Uno + Ardumoto + BT robot works from USB but not from baterries
0
Arduino ATmega328P works but board (Uno R3) seems broken
0
Arduino Uno not working as usb HID interface
0
Can you output to D+ and D- so that Arduino Uno can be used as a USB device?
2
Cannot power up Arduino Uno + Ethernet Shield with other than computer USB
1
Arduino Uno won't upload code and overheats
2
Can I use and external power supply and USB at the same time on my Arduino?
1
Broken USB connection