Arduino does not boot when SPI lines are loaded

i connected an Arduino Nano to an external SPI Flash using THIS tutorial (russian) and the SPIMemory library. While accessing the Flash works well, i have encountered the following issue:

The Problem: When the SPI MISO line is pulled high by the flash while the Arduino boots, it does not start, for example because it was rebooted while accessing the flash. I have to power down the Flash before it boots again. But even then, it takes unusually long to boot.

I know that the Atmega328p allows reprogramming via SPI, but to my knowledge this should not cause this behavior since the SPI lines do not change (starting the programming mode would require a command to be sent immediately after restart). Is there any way to prevent this behavior? (Except disabling SPI programming via fuse bits, this would be my last choice)

Programming the Arduino via ISP does work, however i added some series resistors to the flash to prevent accidentally driving the SPI lines from multiple sources.

The problem seems to come from the MISO line, when it is pulled to VCC the Arduino does not start. This is not mentioned in the data sheets anywhere and i am not sure how to prevent this (sketch below to show the wiring). 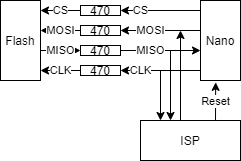 I honestly can't imagine why a sketch like that would hang in this scenario. But I'm confident that my answer can solve the issue.

My guess is that the following happens: The flash is selected (CS pulled low by atmega) at the moment at which the reset happens. At this moment, the master will stop generating a clock signal and CS will be floating. Thus, the flash will not be deselected reliably due to the floating CS and MISO will remain in the state it was before the reset occured (HIGH if it was transmitting a logic 1, LOW for 0). Basically, the SPI communication of the flash will be stuck with MISO being actively pulled to logic high or low.

IDK why this causes the sketch to freeze, but if you add a pullup resistor to the flash's CS, it should be deactivated by default (and also after a reset of the atmega as pins will be inputs/floating by default). As a result, the flash can not actively pull MISO and should therefore barely affect the atmega at all.

I suggest you add the mentioned pullup and see if that makes any difference. If it doesn't I'm going to delete this answer, but it was a bit too long for a comment ;).

Edit: I also just saw that you are missing the pullup resistor on the reset pin. That could well be the actual problem.

Not the answer you're looking for? Browse other questions tagged arduino-nano spi flash or ask your own question.

2
Slaving multiple Arduinos via SPI
3
SPI with a level converter in the other end of connection
3
Why isn't there bus contention on the MISO line during SPI-based programming?
3
Arduino Nano nRF24L01+ DFPlayer Mini SPI Problem
0
Slave SPI does not work
1
Arduino doesn't boot unless I short USB pin 1-2 (VCC/Data -)
0
noisy output lines when waking up from a sleep
1
Is it possible to upload and run code from EEPROM during boot time?
1
25Q128 flash and garbage data over SPI