How do I use this sound sensor?

I bought one of these: 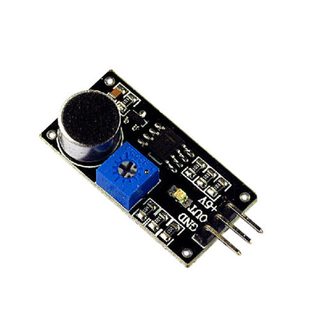 My guess is that OUT is an analogue signal that I can measure with my Arduino, am I right?

I am using the "Analogue Output" example code but I just get 5V all the time, it does not seems to change with the sound levels.

Am I doing something wrong? What am I adjusting with the blue square on the board? Should I maybe do that?

The wording on this particular eBay item is pretty poor but there are plenty of similar products with better descriptions that are photographically identical... example that make a little bit more sense.

Anyway, I don't think this gives an analog value output, the LM393 is a comparator, so I think the blue dial sets the 'threshold level' and any sounds over that level cause a logic low. i.e. it compares the audio level and the dial and when one exceeds the other it gives a signal.

The features also say "The output effective signal is low level" which is probably Chinglish for the signal is a logic low, i.e. when the sound is heard it goes to 0V rather than 5V which is what I think you were expecting.

In summary: This device is is more like a Clapper, it detects a loud noise and sends a digital low signal.

Try making a loud noise with the same setup you already have, and if not try adjusting the potentiometer by turning it, but not too far! It probably only turns 180-270º.

2
Basics with DHT11
2
SainSmart CO2 sensor module use?
18
How to get weight data from glass electronic bathroom scale sensors?
3
Wired IoT sensor network with PoE?
0
How to connect capacitive touch sensor to Arduino?
0
Soil moisture sensor not working in "pcb"
0
NodeMCU V2 ESP8266 - Use 5VIN as power for heater of a MQ-9 Sensor