Arduino UNO does not get recognized by PC(no USB connecting sound), also TX and RX not blinking, neither are lit

I am trying to build a robot, which needs motors to roll around. So I was trying to control two DC motors with H-Bridge that comes with Arduino StarterKit(H-bridge motor driver [L293D]). I used Sketch that looks something like that 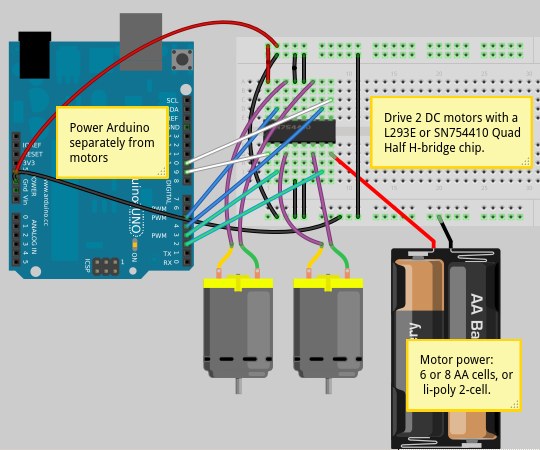 I did read that Arduino needs separate powering, but i did not use any only USB connection. I connected 5V that comes from arduino to where + pin from battery should have been connected and motors were controlled and working. However when i tried using 9V battery and connecting it as seen on above picture ,H-bridge did not control mototrs and nothing was working. There is also another aspect - when robot was touching the surface then wheels did not move aka motors did not rotate and when you picked it up motors accelerated to quite some speed. Also when robot was on the surface and connected via USB, the PC made these USB connecting sounds repeatedly. I am not sure when RX and TX stopped working. Power LED and L13 LED do work correctly.

Any ideas? Is it Fixable?

You should definitely avoid connecting anything else than 5v to these 5v(!) PINs. The Uno has regulators, but these only work when powered through the power-dc-connector (or USB). You can easily buy a 9v-block to dc-jack cable to connect power to the right point easily.

The "5V" pin takes only regulated 5V input. Your schematic shows the the board powered here, and you mention 9V battery. That's not a good idea.

If you have 7V-12V, then you can supply the board via the "Vin" pin. It passes through the same regulation circuits that the DC jack does.

VIN. The input voltage to the Arduino board when it's using an external power source (as opposed to 5 volts from the USB connection or other regulated power source). You can supply voltage through this pin, or, if supplying voltage via the power jack, access it through this pin.

May be your ATmega328 IC would have been damaged or ATmega16u or ATmega8u chip was damaged. I also got same few days ago.

Not the answer you're looking for? Browse other questions tagged arduino-uno programming uploading usb or ask your own question.