Why is our refresh rate consistently decreasing in logging on SD card?

The current code is used to gather the state of 12 infrared beams and log them to an SD card using the real time clock to mark the time. The code uses a switch to turn the device on and off and an LED to indicate if data is being written to the SD. When we later looked at the data on the SD card the refresh rate was slowly decreasing and we ended up with only 10 logs a second after a few hours. Why is this happening and how is it fixed? 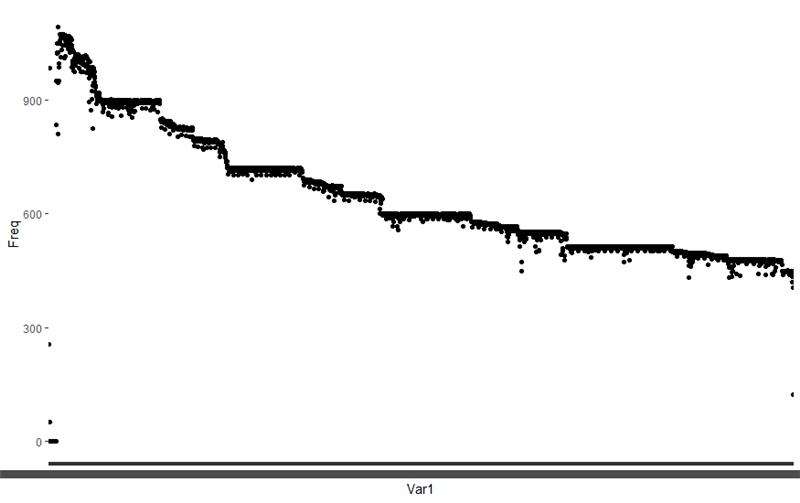 I don't have certain answer for you, but a deep suspicion. If I get bored I'll confirm it. Confirmed below.

In short, finding the end of the file is linear operation in a FAT filesystem. It must follow the allocation chain to find (or create), the last cluster of the file. The allocation chain is sort like a linked list with the links themselves being the only thing in linked list structure; their numbers are mapped onto the cluster numbers. So you're traversing a linked list, except you may be doing it across multiple sectors of an SD card, which is comparatively expensive.

So by reopening repeatedly in loop(), you're forcing it to perform this lengthening process each time, apparently because of:

The part of .close(); that does this is made available to you as .flush();, without needing to close the file and forget where the current cluster is.

In other words, you should be able to open() the file once in setup() and replace your .close() in loop() with a .flush().

That said, you needn't and probably shouldn't flush on every record write. If you're doing this so that you can shut the device down, you might want to just add a push-button that does the closing or flushing and then waits in the tight loop until it's power cycled.

In short, yes, there's a measurable, file-size related cost to opening the file for write and seeking to the end. And it's just a fact about the FAT filesystem and noticeable because it's impractical to load the whole allocation table into memory on a small Arduino. It would normally (e.g on the desktop) be loaded into memory and you'd scarcely notice the difference in opening files of different sizes.

In my one tested scenario for my setup the numbers predict that when the file grows to approximately 155 Meg, it will take about a tenth of a second to open.

Your results will probably vary widely with MCU type and filesystem block size, but so long as you're using a Arduino with a SD library that minimizes memory footprint, you'll have a noticeable increasing open time with larger file sizes.

The below is going to be a bit nerdy, but since people seem to be interested in it, I'm giving some detail. Arduino code follows at the bottom for what was used to collect the data that produced the graph.

I emptied a 2 GByte SD card. This included removing the "System Volume Information" that windows (or perhaps the card maker) had put on there, and confirmed that were were no allocated clusters, no file chains. Under these conditions the file should just grow in consecutive sectors on the card; at least as presented by the card, as in: if we ignore anything the card might be doing for wear-leveling. The pattern used in the program makes it pretty easy to just look at a raw image of the card and see that this is what happened.

Anyway, with my setup these are some results: 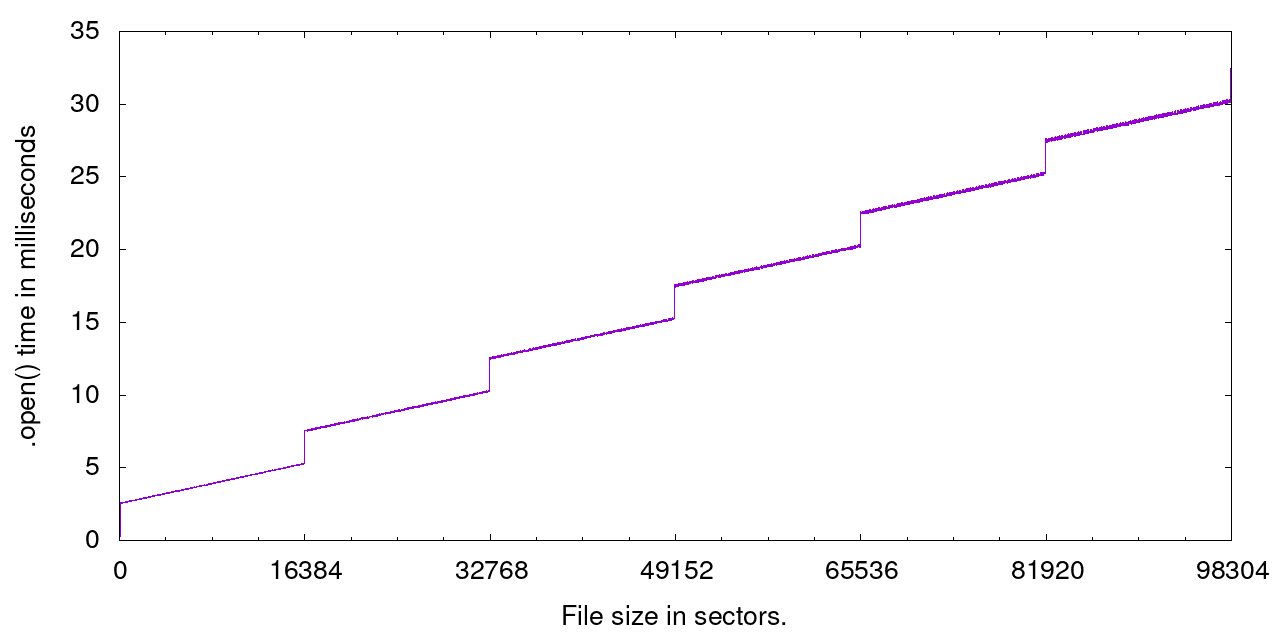 This SD card is FAT16 formatted, something I hadn't noticed until I ran the numbers on that staircase pattern and found them defying expectations by a factor of 2.

Being FAT16, each FAT table sector, has 512/2 = 256 entries in it. Each entry number corresponds to one cluster (block), which for my SD card's filesystem happens to be 32 kByte, or 64 count of 512-byte sectors. So every FAT table sector (in my case) is responsible for locating 64 * 256 = 16,384 file sectors. In other words, the staircase pattern appears to reflect the fact that following the allocation chain for our consecutive file means reading another FAT table sector for every 16,384 sectors of the file, hence the jumps at those intervals.

1
Efficient way to save accelerometer data on sd card