Can't program Arduino via Bluetooth (HC-06) with a Mac

I bought a HC-06 Module for my Arduino Uno the other day, yesterday it arrived and I'm having trouble using it with the Arduino IDE.

I set it up, connecting 5V, GND and RX/TX crossed. After a bit of searching, it shows up on the bluetooth settings on the macbook. When I click "connect", it fails, after I click "Options", then set the Pin to 1234 it says "Connected". The LED on the HC-06 is still blinking (which is OK I guess, since I'm not yet communicating).

I have a Sketch running on the Uno that prints out some text. When I open the serial monitor (after connecting like above) it works, displaying the values I expect. However, after closing the serial monitor the HC-06 changes to "not connected" on the mac.

Do I have to configure the HC-06 or the Arduino IDE in any way to make this work, and, if so, how can I do that?

Thanks in advance for your Support!

The on-board USB-to-serial pulses the reset line to start the bootloader. HC-0x don't have the extra signal available that USB uses for that so you'll have to manually reset the Arduino just as - or very slightly after - you click to start the upload on your Mac; you may need to experiment to get the timing right, but once you know it, it isn't hard to do. Keep Rx & Tx crossed as you do for Bluetooth terminal communication. And even with all that, I've never achieved anything like USB upload speeds (baud rate for baud rate) using Bluetooth.

Update:
In brief, it could be timing, baud-rate, or pairing.

I find it easy to get the timing: hold reset / click (and let go) the upload button / release reset. It doesn't need to be so fast that it's a challenge to coordinate but do it faster than counting seconds.

Your HC-06's baud rate will have to match the baud-rate your boot-loader expects. It looks like Uno's bootloader's use 19200 baud (and there are some way older ones that used 9600). My bare, pre-programmed chips' boot-loaders from Adafruit.com use 57600 baud. Your preferences.txt file should contain a line like 'atmega328o.upload.speed=115200'; assuming you're able to upload via USB, then use this baud rate for the HC-06. (The path to your preferences file is displayed on the Arduino IDE's preferences dialog.)

The 'Resource busy' message sounds like your Mac isn't paired with your HC-06. In the MacOS Bluetooth System Preferences pane, pair the Mac with the HC-06 and be sure HC-06's LED is on steady (not blinking).

Regarding the ability to upload, that is correct - you won't be able to upload code via Bluetooth. In addition to providing a serial connection, the USB connection does something extra (hold reset, I think), when you upload via serial-over-usb.

If I remember correctly, you do not want to cross TX and RX.

Usually, you cross TX/RX because you are looking at it from the opposite side - the PC's TX is the Arduino's RX and vice-versa.

However, in the case of BlueTooth, the HC-06 has the same perspective as the Arduino - TX (transmit) is TX on the HC-06, since that is what the HC-06 transmits (over Bluetooth).

Go read http://arduino.cc/en/Hacking/Bootloader?from=Tutorial.Bootloader - this is all about the bootloader.

It seems from that that current bootloaders run at 19200, some older ones run at 9600. There are commands to program the speed on HC-06 - instructions can be found at http://www.instructables.com/id/AT-command-mode-of-HC-05-Bluetooth-module/ (this covers the hc-06 too).

Based on the bootloader tutorial, I think you have "less than a second" (only two specific boards are mentioned, so this is a best guess; I am amazed that it is this long, I expected a few milliseconds). If you have a USBISP, you could compile and upload a new firmware, with settings more to your liking - this is outside the scope of this article.

Another option is to create a completely separate uploader - an AtTiny could do it. Connect the AtTiny to the serial port, and then get the AtTiny to reset and program the board, or even program it via ICSP. This is a lot of work, and also outside the scope of this article.

After dealing with the problem for several hours I unexpectedly solve the problem.

The HC-06's LED keep blinking after I entered the "1234" code. In my case (I'm using Windows 10), the HC-06 status changed to "connected" for few seconds and then changed to "Paired". Once I opened the correct COM port to receive data from the HC-06 to my PC computer, the LED changed to solid ON. Then I was able to catch data from my Arduino UNO. As soon as I closed the COM port in my PC (I used CoolTerm), the LED changed to blinking back again. The COM port I used to receive the data was the one indicated with direction "Outgoing" in the PC's Bluetooth settings. So, I was expecting the HC-06 to behave as my Bluetooth speakers or my Bluetooth headphones: Always connected. I was wrong and it cost me several hours of testing.

In my firsts tests I focused opening the COM port with direction "Incoming". Nothing happened here and I lost a lot of time. I tested my wiring between the arduino and the HT-06 module by changing the device name from "HC-06" to "ArduinoBT01" and it worked.

This is the sketch I used to receive data form the Arduino via Bluetooth: 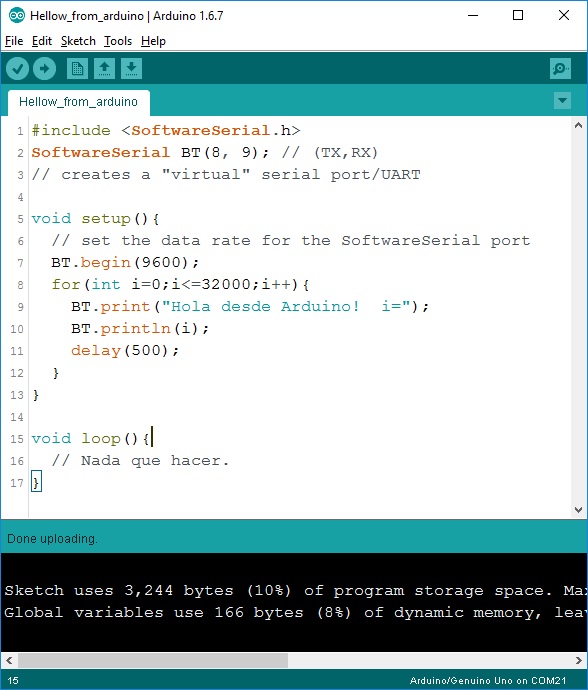 This is the CoolTerm's window capture: 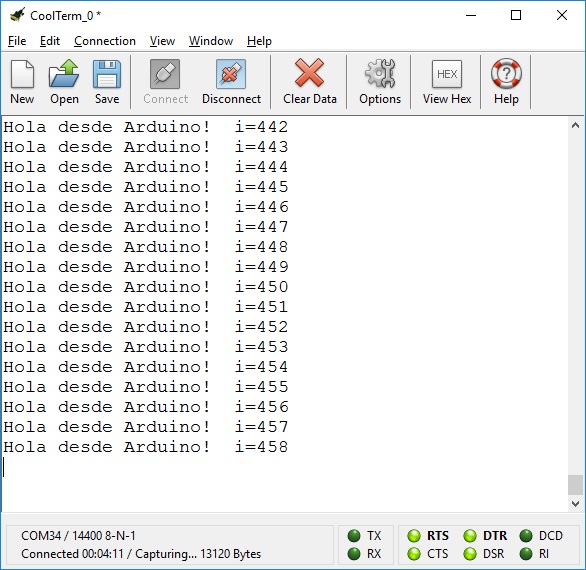 Mysteriously, the CoolTerm speed setting is 14400bps but the speed in the device manager for COM34 is 9600bps. After triying opening many times the COM34 port with 9600bps I got this error in CoolTerm:

I hope this helps.

Sorry for bugs in my English.

Not the answer you're looking for? Browse other questions tagged arduino-uno serial programming bluetooth or ask your own question.