An XBee Series 2 is set to Router AT whose TX and RX pins are connected to an Arduino Nano's Rx and Tx pins respectively. The Arduino is connected to a Mac OSX via USB.

A second XBee Series 2 is connected to a Windows system via USB. It is set to Coordinator API mode.

Using the sketch below on the Arduino, a packet is sent from the Router AT XBee to the Coordinator API XBee, which is seen by XCTU as a Explicit RX frame. However the Arduino LED should blink once if it received a reply packet (should it?)

On another test, I wrote a script to send a frame for the Coordinator API XBee to send to the Router AT XBee. Once again the Arduino LED does not blink, and nothing is seen using Arduino's Serial Monitor.

Using the same Arduino sketch which continuously sends API frames to the Coordinator, I connected the Router AT XBee's RX pin to Arduino's RX pin, so the frames the Arduino are sending out are going back into its RX pin.

This causes the Arduino's LED to light up! So there is nothing wrong with the code.

Problem: Does this mean the Router AT XBee is not configured properly? I do not think its TX pin is damaged because XCTU can still read the settings off this XBee. Any ideas on how we can troubleshoot this?

As I mentioned in my comments to your question, if you are using this library then it doesn't actually support AT mode. In fact, AT mode (otherwise known as Transparent Mode) is simply attached to the Serial port and accessed directly through the Serial object.

Example: put this into your Arduino attached to the AT Router.

Then open the console on the XCTU software on the API Coordinator watch the packets.

You will see above the received packets from the router. Because the coordinator is in API mode, you see it like this. (In AT mode, you will see the raw packets.

In AT mode there is no packet confirmation, validations, status or anything. They are all handled "transparently".

As a side note, I've seen many references that both XBees need to be in the same mode. That is, in fact, incorrect. If we modify our source to include Serial.read you would see data the other way as well.

edit: I thought I would add communications between AT Router and API Coordinator. I have modified the code in the Router to receive a constructed packet from the Coordinator via the XCTU software.

Then in XCTU construct a packet for the Coordinator. I'm using version 6.1.0. 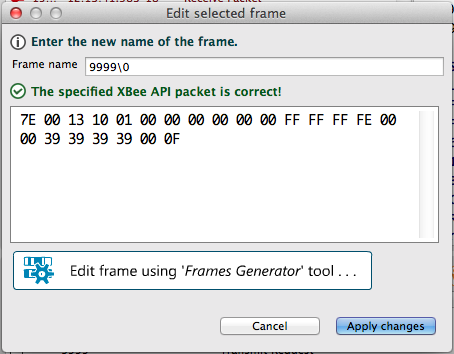 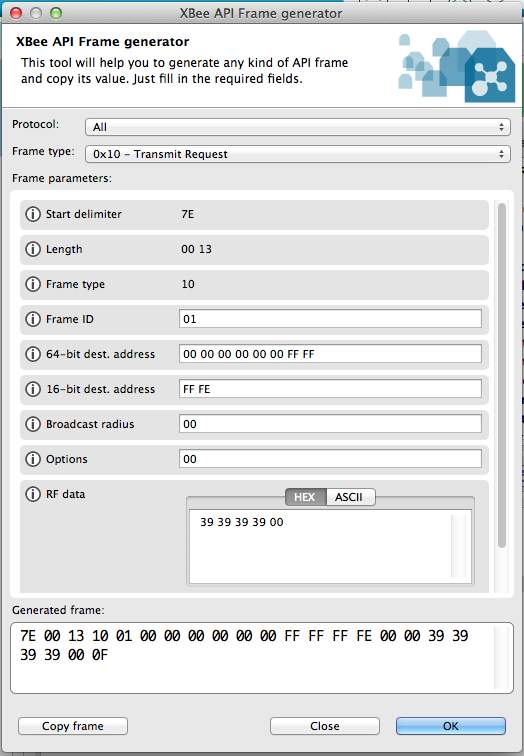 here is the packet being received by the router. I am only sending 9999 nul terminated.

Then once the pair are running, you can send the constructed packet from the XCTU software and it will be received by the router.

3
Serial.write displaying repeating output from Xbee communication
0
How to read info from an Xbee Pro S2B to an Arduino with a Xbee Pro S2B
0
How does coordinator XBee receive data from router?
1
Determine XBee Packet Route
0
xbee communication not established between arduino
1
Communication between Arduino and XBee
2
Send and Read packet XBee AT mode