I am looking for a way to create a true analog output with the arduino uno. I am constantly reading an analog input on a0 pin, all i want to do is send the same signal as output. I know arduino convert the signal into pwm so have can i convert it back to true analog signal.I have a dac too but not getting proper output.

secondly, i want to send same signal by converting it into bits through Ethernet so how do i send and receive the signal.

here is my code for dac.

here is my circuit for audio amplifier

and for the speaker it is connected on DAC out.

FYI:I am able to read the data on my serial monitor form mic and i am also able to so do some operation by just using mic and GUi. I just want to here what i am saying on speaker.

At a rough estimation each call to MCP.writeDAC or MCP.getValue will be at least 32 bits long and you use three of them in each loop.

is redundant, you should store the value in a temporary variable and use-it in both "print" and "if".

With 10us for each bit that means 1060 us for each loop. The analog read also takes 100us to complete. Over all 1160us minimum. Is the MCP.getValue() really needed?

That means that your maximum sample frequency is 860hz and the maximum bandwidth of 430hz. I doubt that this is an acceptable bandwidth for a microphone.

Even so, the output signal will not look similar at all, you need a higher bandwidth or to limit, if possible, the bandwidth of the input signal.

In some limits you can modify the MCP4725 library to use fast wire clock four times faster if it suits your requirements. If you also drop the two MCP.getValue() calls that will be again almost three times faster, up to 5khz.

Also you might search for faster ADC on Arduino.

The ADC works only with positive voltages. Short the output capacitor of the amplifier!

If you want something simpler than the transistor version you can use the following as well, for the other options skip to the --here-- mark

Oldstyle analog out. this works like a vacuum tube and while I use a LDR you can also use heat or a actual vacuum tube.

How this works: while a led flashes, a LDR needs a certain time to just to values(often up to around a few ms), so this will stabilize your adc signal.

You send the desired amplitude as a pwm signal to the light source(you probably want to invert your pwm signal) which aims at the LDR. you send your sound frequency through the LDR which now works as a variable resistor.

!!Use low resistance LDR's and a bright light source to get a as low as possible resistance. with (weak)lasers, you can get a normal LDR down to around 1 to 0 ohm. but you will most likely use a led since that has more precise intensity control. 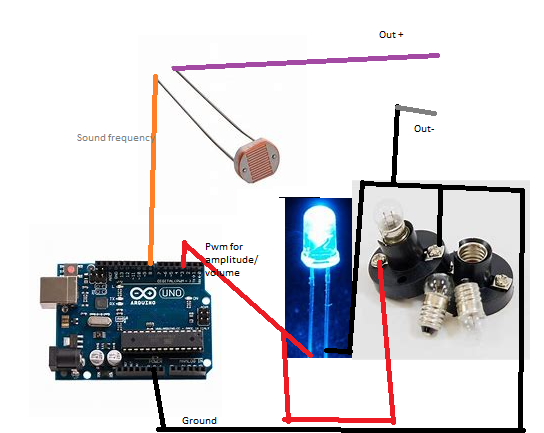 Another simple method is the inversed of analog read in an Arduino. you basically use multiple output ports with different resistances to get a different output when done right in this case you can get around 257 different volume levels with 8 pins for the amplitude and 1 for the frequency.

--added this here as a simple explaination/guide-- first start with getting your microphone working, see if analogread get's some high values. if it stays at 0, 1 or another low value, then you didn't include a transistor with your microphone to boost the signal.

-For your output start with a project without a microphone to see if it is working right. you will need to use 2 pins to power your output(excluding ground, assuming single-channel audio). -the first one you will need for your frequency signal output. the other one is for the amplitude/volume/gain. -We will use any type of amplifier(transistor) to merge the signals, in this case, I assume a transistor since they are cheap, simple low power, have an easy dynamic range and you most likely have them already.

-this following part can be done in 2 ways I would suggest to try way 1 first since it is most simple, logic, and fast which is great on a slow which is great in a small microprocesssor. where method 2 might seem the exact different way around but is much more precise.

Method 1: connect the frequency output pin to the emmitor pin of the transistor where the + normally goes in. Connect the amplitude output pin to the base pin of transistor(the trigger) add a very small capacitor(or a bigger one for tests) between the base and ground this is to convert the adc in analog voltage instead of pulses. the collector of the transistor which you would normally connect to ground is your output. you might want to add a small resistor after it especially if you are using it for a audio cable. you can also directly connect a very small speaker to hear the sound for a cable(be careful withconnection arduino IO to things like a pc) you connect the output as oudio signal and the ground as ground. but check what voltage the other devices audio port supports since arduino's IO pins generate 5v

tinker with the values of the capacitor size. (you now have an energy pool in front of the transistor if you know the ampere on which you are outputting you can use this to regulate the pool, otherwise you can read it using the analog feedback loop). important to know is that if you want precise volume you use a larger capacitor, if you want fast volume differences you use a small one and intentionally use more pins to charge it. for an Arduino Uno due to low analog read speeds, I would recommend a larger capacitor or this.

extra stuff when putting your complete system together you might run into speed issues. you should therefor connect the microphone to both a digital and a analog pin. the digital pin constantly monitors the frequency and the analog pin measures the amplitude sometimes(add a small capacitor get that average amplitude). I would also recommend turning down the analog read precision to prevent checking for all 1024 possible voltages.

for method one you can also add a extra resistor from base to ground and from the amplitude pin to base so you can more precisely calculate the voltages.

You can try to use 2 pins for the output signal. one of them sends the frequency digital(3 pins if you also want negative polarity audio). this output signal should go to something like a transistor or a digitally controlled potentiometer or amplifier. I will assume you use a transistor since those are most common and quite fast. the first digital output pin should go to the emitter pin of the transistor the second pin is used for the volume and will go to the base of the transistor. you might want to add a very small capacitor between the base and ground to reduce frequency interference(to prevent the ADC frequency from showing up in your signal). the Collector pin would be your analog output suitable for audio.

So in basic steps:

however What Dorian said are things you might want to keep track of as well since they often indeed tend to kill of such projects because you very easily run into speed limits(analog read in a arduino ar basically 1024 digital reads(literally)).

So some tips for your cirquit:

there are way more ways but these are easy to do. for sending it trough internet however you need to be careful that the module you use processes those things itself so that you do not just connect a internet port since that would slow your system down even more.

For those wanting a ms paint sketch: 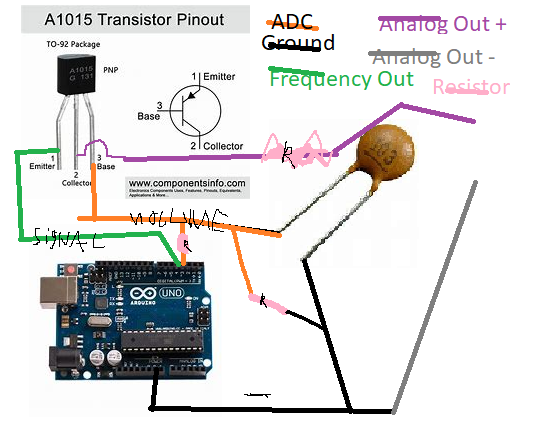 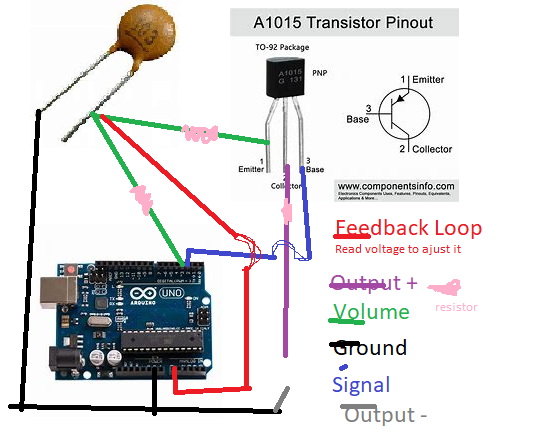 note that I just used random images from the internet you can use any capacitor and transistor that works for this, I did not check if this transistor is right for this, but it had a nice layout description in the image. the capacitor doesn't need to be ceramic, but this way you see clear legs and I don't need to focus on polarity. in general, all cheap 5v compatible transistors should work and all capacitors if they are not way too big or too small for your load.

I used descriptions rather than logos, so anyone should be able to read it as long as they have software to tell the differences in colour if they are colourblind.

How it works The transistor sends the voltage from the emittor to the collector(or the other way around based on the transistor you use). so in method 2 which also works for mosfets. we send a adc signal to the capacitor to charge it to a voltage, you should however also add a resistor to ground or a cable to a analog port, because otherwise the voltage can just build up to 5v. this capacitor which we charge becomes a analog power source. we connect it to the emmitor(or pin which you normally connect on the + side). so if we where to open up the transistor(close the cirquit) by putting a positive voltage on the base or trigger pin then you would get a output of the voltage that you put into it. so if you play the frequency digital on the base completely opening and closing the transistor then you get a voltage output similar to the voltage in the capacitor. method one works more difficult but a transistor opens up relative to the current going from base to exit, so we use the pwm and a small capacitor to get a analog voltage on it only partly opening it, then we send the digital audio signal into the pin that you normally connect to 5v and you get that frequency payed with the transistor acting as a variable resistor So method one uses a transistor as a variable resistor And method two uses the transistor or fet as a switch which uses the voltage build up in the capacitor, doesn't actually need to use pwm if you use a feedback loop. 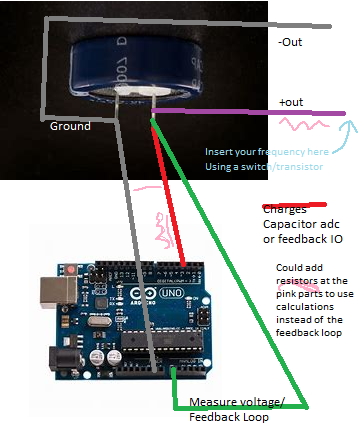 Not the answer you're looking for? Browse other questions tagged arduino-uno arduino-ide audio code-optimization analog or ask your own question.

226
Can I program for Arduino without having a real board?
1
send and recieve analog data from one arduino to another arduino via web/ethernet

3
Integrating an analog signal using Arduino Uno SMD
0
How to find the peak value of analog signal?
0
Boost an audio signal for analog read - Envelope Detector
1
Mega 2560 does not play audio file when I want. It plays when the first condition is met, but not the other
1
send and recieve analog data from one arduino to another arduino via web/ethernet