Extracting .hex from Arduino Due

I have an Arduino Due that was programmed by the Arduino IDE, to cut things short I lost access to the original sketch (.ino) file, there is no way of recovering it no matter what.

I know that in the 8-bit MCUs I can read the .hex file from the flash memory, I already did that with PIC and AVR MCUs with their software programmer utilities.

My question is: Can I use a software programmer utility on Windows PC to extract the hex file to reprogram other Arduino Due with it? If yes, please help me. I've read about the Bossac utility, it looks promising, but I have no experience in the ARM MCUs field at all.

again: I am NOT interested in C or Assembly code, I just want the .hex file.

You can use JTAG and probably should. But, it can also be done with bossac if you are very careful. If you're not, you'll end up erasing your flash on your source board.

This would maybe not be preferred over JTAG because it is probably easier to screw up (see warnings below), but it can be done. I may add some on JTAG programming later, and if I do it may be above this section for that reason. The main advantage here is just that you don't need a JTAG programmer. The one caveat is that your existing sketch, or rather the image of the sketch that has been burned onto what I'm calling the "source board" has to be functioning well enough that it can cooperate in being placed back into the ROM bootloader. I fully expect this is not a problem for you, or for pretty much any normal Arduino sketch that has been burned to a board.

On my Windows machine, it was in:

It may be under a different version number. It's possible that it will be in a completely different location.

Should locate it it, eventually, in any case.

On Linux it will be under ~/.arduino15 somewhere:

On a Mac it will probably be under a /Library/ directory under the user account somewhere. You get the idea, locate it, make sure you can run it.

NOTE: There's a bossa program that is the GUI version where bossac is a command-line program. Unfortunately the IDE board support files don't ship the GUI program. If you're having trouble with the command-line and want to try that instead, go for it. But test it on a board you don't care about beforehand. I have not tried it.

Connect to the Native Header

Connect your native USB port on the source board and only to that port. 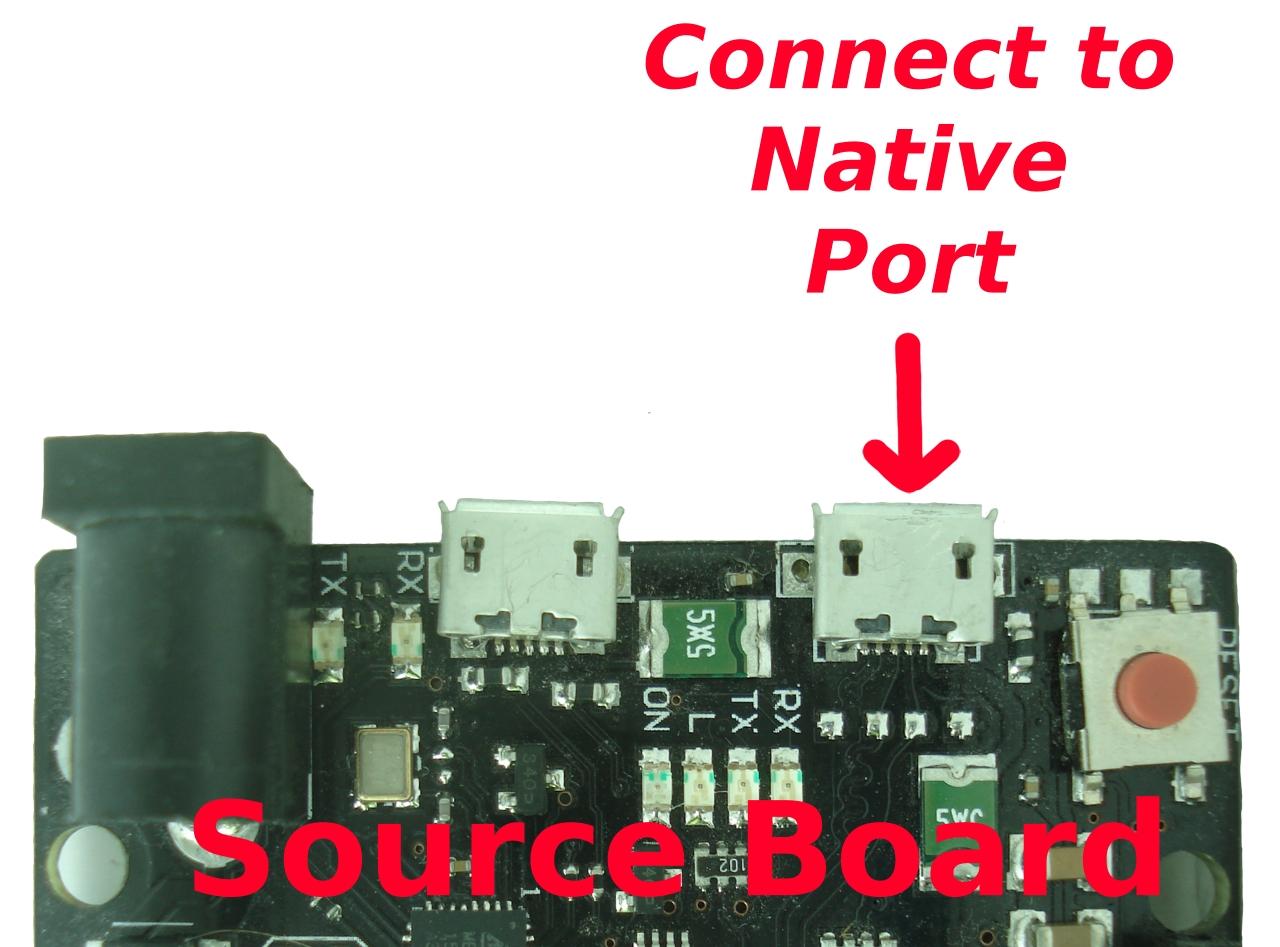 Open a terminal emulator of your choice at a rate of 1200 baud to the native USB port, wait a couple seconds and then close the port. You can use the Serial Monitor from the IDE to do this if you want:

What connecting at 1200 baud does is activate the code inside the core part of the programmed sketch that changes the board to boot from the internal ROM bootloader. It doesn't need traffic. It just needs to see a request for 1200 baud. More specifically, it needs to see the DTR "signal" go inactive, which happens when the port is closed, when the effective rate was 1200 baud.

NOTE: if you screw up here and connect to the programming port at 1200 baud instead, you'll wind up causing the ATMega16U2 to erase your source board. The IDE remembers your last chosen baud rate, which makes this easy to screw up as well. Hence the weird little dance in the above instructions regarding reopening the serial monitor and changing to something other than 1200 baud. It's just putting an extra barrier up to accidentally doing this.

Once you've connected to the native USB port at 1200 baud and closed the port, your board will not run your sketch any more. It's still there, it's just not running it. The board has been told to sit in the ROM based bootloader, waiting for bootloader commands.

What we're going to do is run the bossac command you found earlier like so:

I'm assuming you either changed directory to where bossac.exe is, or alternately you're going to specify the necessary path to it found earlier. I've found this command locates the correct COM port automatically.

As said, this is a raw binary file. But you mentioned a HEX. I'm assuming you didn't mean that literally, so I'm not going to detail how to convert the .bin file to a HEX format. Though, if you want to do that, you should know that it needs to be offset to 0x80000, because that's where flash starts on the Due.

Disconnect your source board from USB.

Making your clone (target) board

Connect to your target board via the programming port. 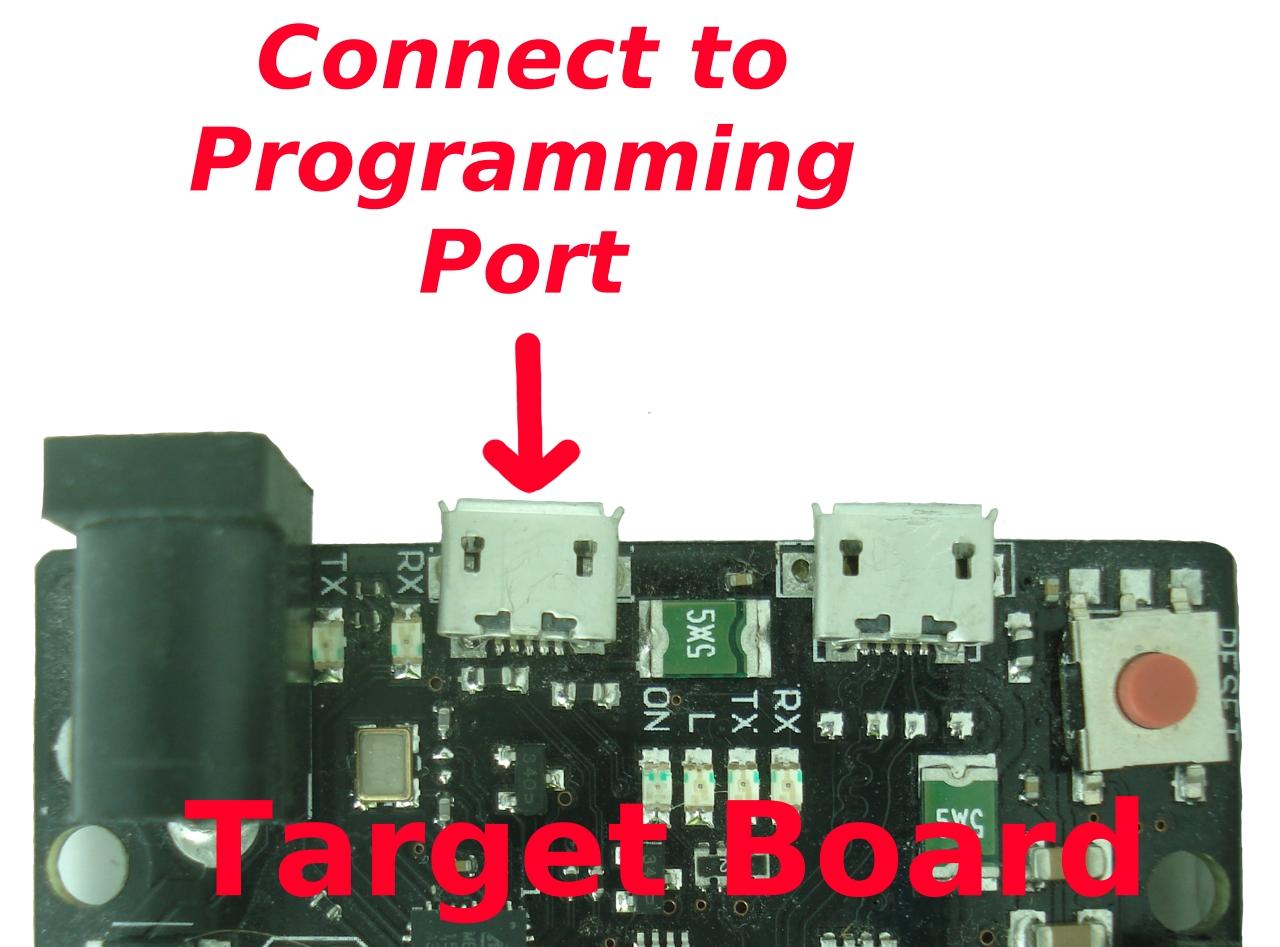 Your target board should now be be behaving identically to the original source board.

Not the answer you're looking for? Browse other questions tagged arduino-due or ask your own question.