Problem with sending IR with at ATMega328P-PU 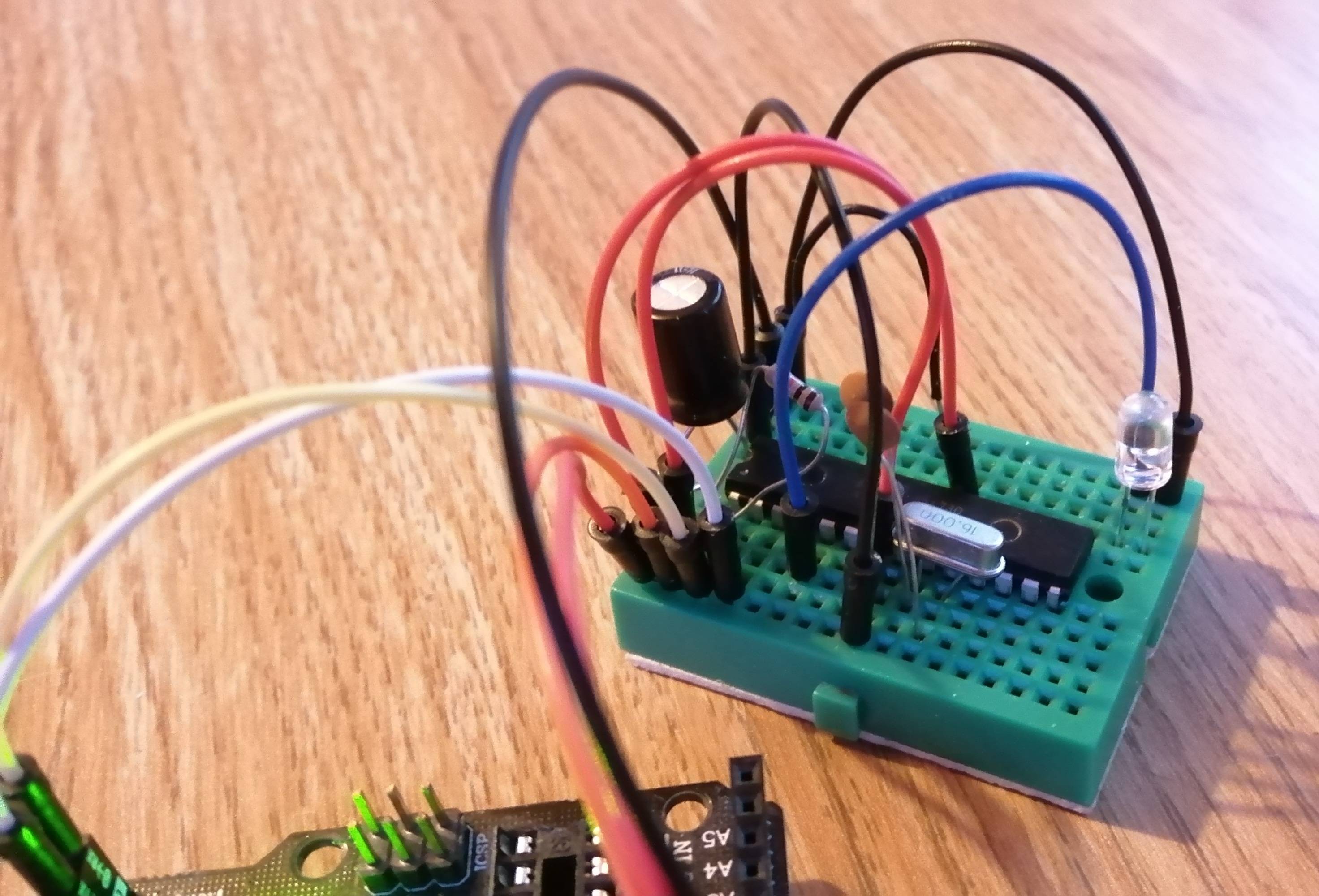 I have a sketch that sends an IR code every second. It works fine (the correct code is received by my receiving Arduino next to it) on the Arduino but when I try to move the sketch to an ATMega328P-PU, the IR no longer sends (the serial monitor output still works).

Are there extra components that are needed to make PWM work without the Arduino board? I am honestly stumped so any help would be appreciated. Thanks in advance.

NOTE: The following comment was left on this answer (below) and indicates the principal problem the original poster was having above and beyond not having a resistor, etc.

SOLVED - my breadboard was broken on that rail. :/

What you have pictured looks alright for the most part with the exception of there appearing to be no current limiting resistor for the IRED. It is possible that you've damaged the IRED by setting the pin HIGH for an extended period of time. It is also technically possible to have damaged the AVR (or just the one pin) by doing that, though this wouldn't be my first guess.

Typical forward voltages for an IRED around around a volt. An AVR pin's maximum rating current is 40mA. To get proper logical levels out of it, it should be less than 20mA. You could perhaps operate near 30mA, since you're not doing much else with the AVR's ports and you're not trying to get logic level voltages out of the pin. For that you'd need a resistor in series with the IRED that is something like (5V - 1V) / 0.030A, approximately 133 ohms. 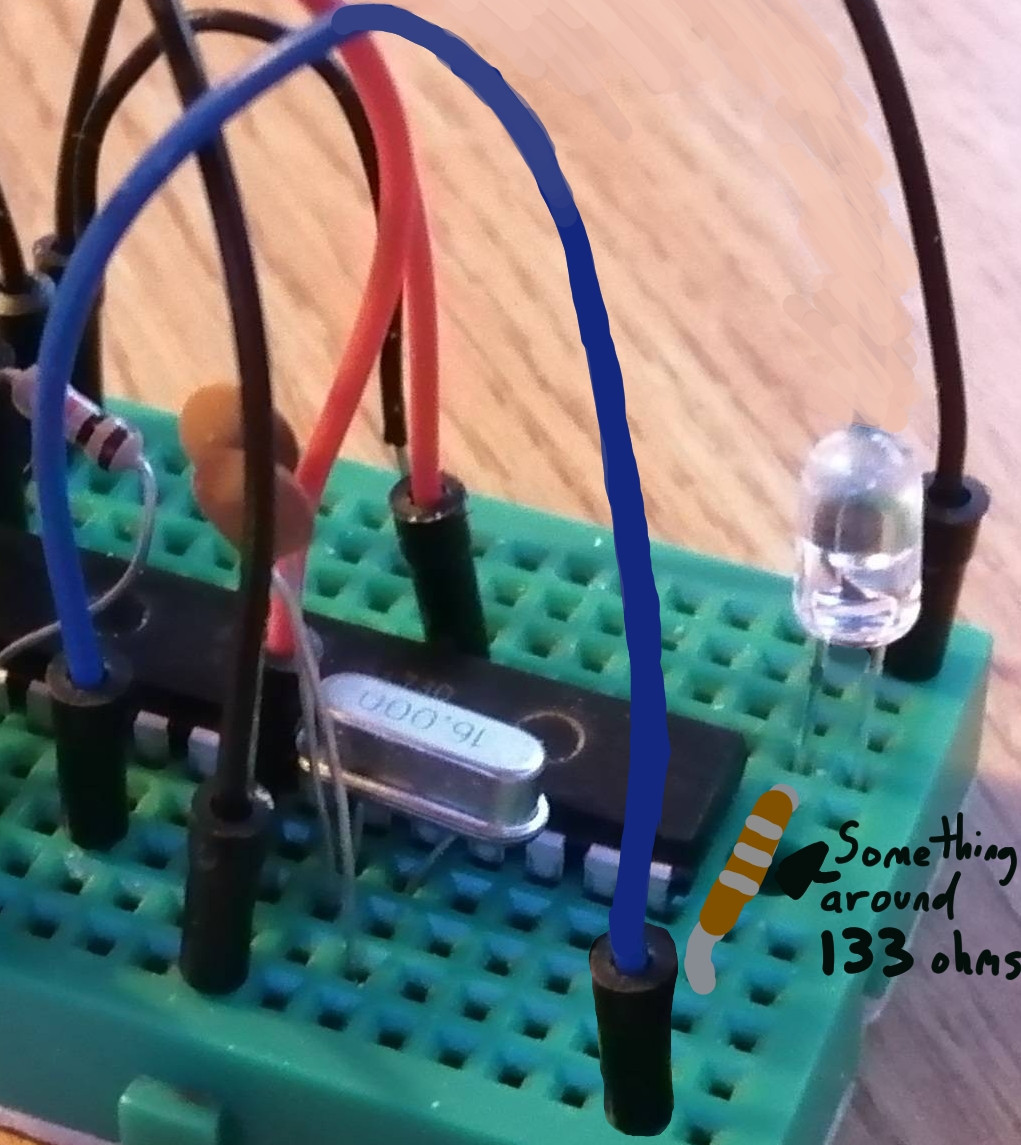 When people use IRED to make remotes, it is normal to use a transistor to offload the current requirement from the MCU. And also to operate the IRED above its continuous operation current, closer to it's rated peak/pulse current. Operating in the low tens of mA often only gets you a meter or so. 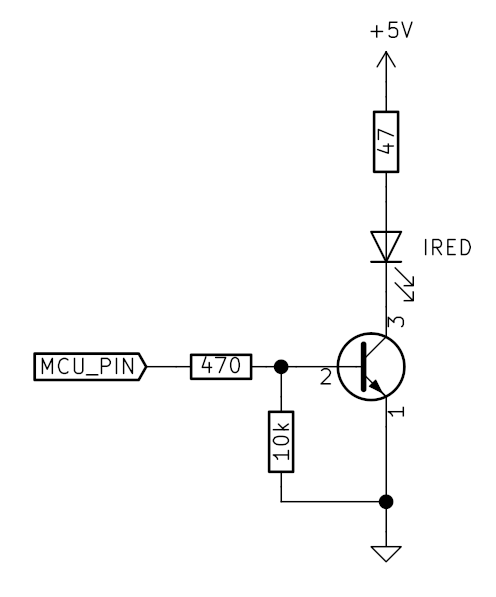 Not the answer you're looking for? Browse other questions tagged arduino-uno led pwm atmega328 ir or ask your own question.

6
Confusion with ATmega328P and 3.3V/8MHz
0
Arduino code to control 4 led's from 4 buttons
0
why data value is 0
1
having problems with my arduino bluetooth car project(with L298n Motor Driver)
1
(very new to C) I'm trying to use irsend with what I think is char* but it won't take it. How can I convert it to what it needs?
1
Cannot receive IR codes after sending IR on same Arduino (I have irrecv.enableIRIn();)