In my NodeMCU I want a statement to turn on an LED, which is easy, just use pinnumber, HIGH. But, what I'm trying to do here is connect multiple LEDs to one pin like this: 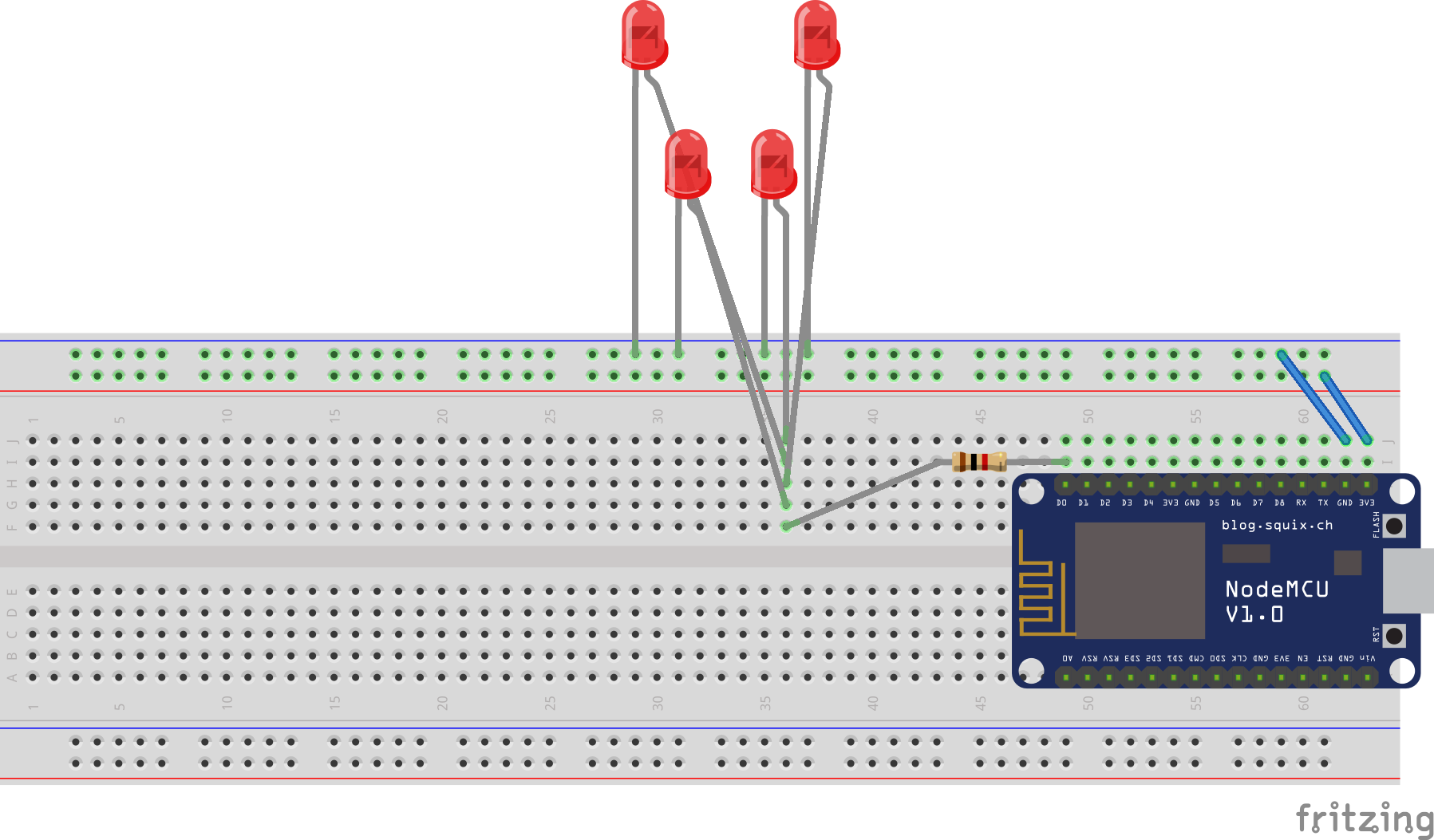 I just wanted to know if this will work and whether all the LEDs will turn on by one command write (pinnumber, high) or do I have to do something else to this circuit? Please help I'm a noob to electronics.

And also, is the resistor correct(1k ohm) or is it 220ohm, because different places suggest different things.

No! Most likely it will not work.

An LED lights up if the Voltage between the Anode (one side of the LED) and cathode (the other leg) exceeds a so called forward voltage (Vf).

This Vf depends on the creation process and differs between different colors. Vf can be between abt. 1.8 Volt (red LEDs) and abt. 4.2 Volt (blue LEDs). Even if the LEDs would have the same color, they might have different forward voltages. If you arrage 4 LEDs in parallel, like you did above, the Voltage over the 4 LEDS is as low as the Vf of the LED with the lowest Vf among the four. If the four LED would not have equal (Vf)s, only one LED will light up and all others stay dark or just glow a little bit.

The sum of the current that flows through the 4 LEDs must also flow through the resistor. So the resistor must let pass 4 times the current that is required for one LED. An normal 3mm or 5mm LED works best at about 10mA to 20mA. Let's say the LEDs have all the same Vf = abt. 2 Volts, and you choose to drive them with 15 mA. You need 60 mA in sum for the 4 LEDs, that must pass the resistor. You can compute the required resistance with Ohms law. R = U / I.

The resistor depends on the Voltage of the ESP, the kind of the LED and the amount of current you need to reliably light up the LEDs. You can not just take values from schematics or discussions the internet. Also 60 mA is very much current for the ESP pin. That might be a problem.

The best way the Light up 4 LEDs from one pin would be to use one resistor for each LED and a MOS FET Transistor that is connected to 5 Volts with its Drain pin, the parallel LED resistor pairs with its Source and to the ESP pin with its Gate. You should also be sure that the MOS FET you use is able to switch with a 3.3 V voltage from the ESP on its Gate.

If you did not understand what I have written, I advice you to learn the basics before experimenting further. The values above are all useless if the conditions change.

Yes, technically your circuit works. But don't do like this.

This applies only to what you are doing

Not the answer you're looking for? Browse other questions tagged led nodemcu voltage-level electronics electricity or ask your own question.

2
Am I multiplexing my LEDs correctly?
1
Using an Arduino for a Diorama Controller
2
ESP8266 NodeMCU first WS2812 LED lights up green
1
Pulldown resistors and multiple switches
1
3x3 LED Matrix with less pins
1
Make lights come on and off depending on which button is pressed
0
Button circuit draws all power away from LEDs