I want to create a small LED strip driver/controller with 2 channels (Cold/Warm white) using Arduino Pro Mini (5V/16MHz). I have connected the parts per the following diagram 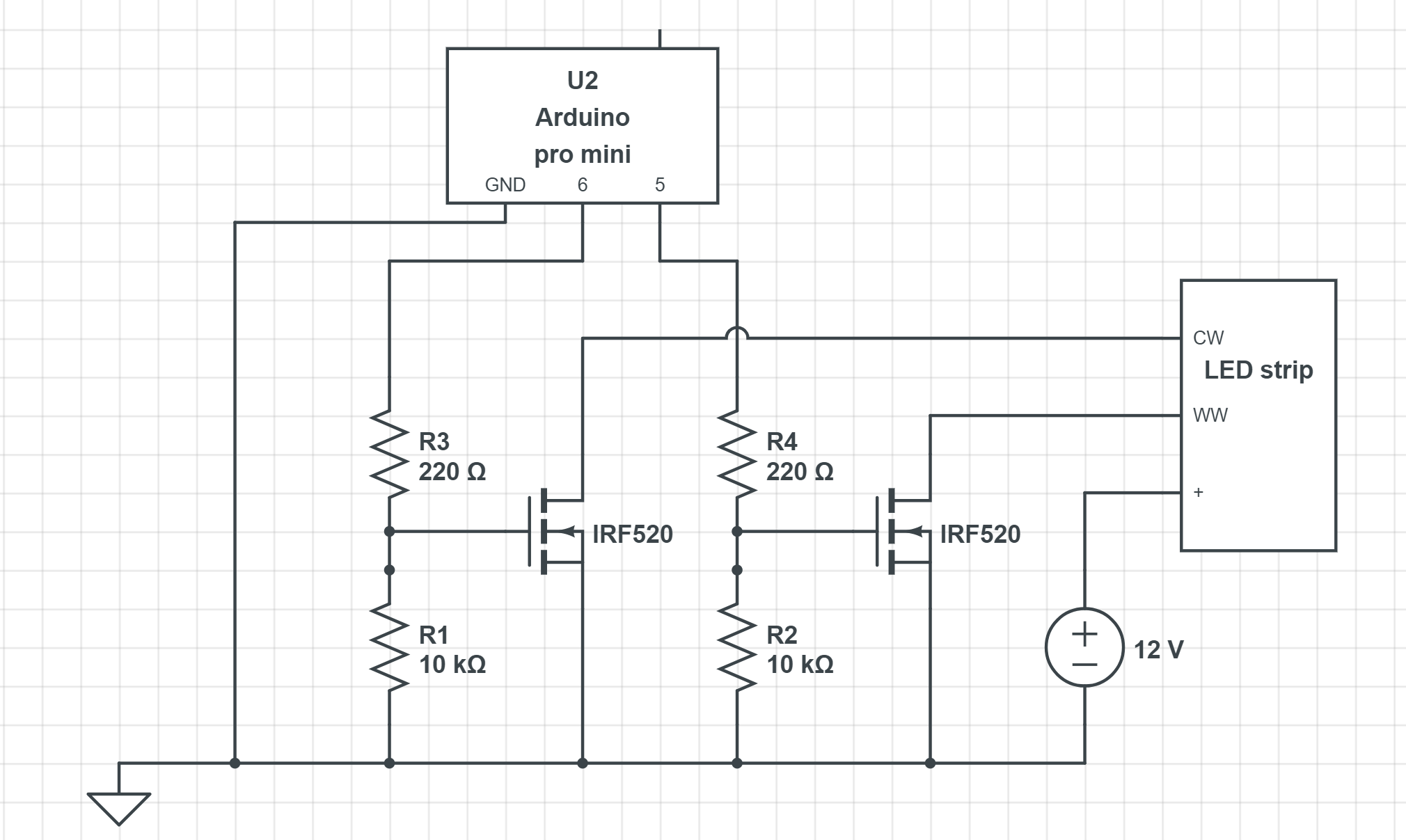 I have pins 5 and 6 setup as output, control them via analogWrite, and it all works great on Arduino UNO.

The problem comes with Arduino mini pro. When one channel is set to 255 and the other is 0, the LED strip does light only in one color, which is OK and when I swap the PWM channel's values, the other light color starts to shine. So far so good. When I set both to 0, the strip keeps on shining at about 30% (I don't have a scope, so I can't tell what the pwm signal is doing). Varying the channels' pwm in the range 0-255 does affect the light somehow but it never goes down to a complete off.

Looking at the arduino uno and pro mini I can't see anything obvious that should make them act differently from the hardware perspective so I'm guessing there's a problem in the libraries or perhaps my arduino pro mini (a clone) is somehow messed up.

Has anyone observed this kind of behavior in Arduino pro mini and has a solution for it?

Edit: Added some measurements per @Abel's request. I measured both DC and AC with and without the LED strip connected.

Connecting the LED strip really does mess things up, but WHY? UNO can handle it, but the pro mini can't! I thought mini was basically just shrunk down arduino uno (both have the same SMD version of MEGA328P), but apparently there are some differences.

Thanks to comments I received from several people here I quadruple checked the wiring and eventualy found the problem. My recent Arduino Uno tests were done on a breadboard, but I had the Pro Mini prototype soldered on the prototyping board which has the holes connected in columns on the copper side. I made the cuts in all the necessary places ... but one! That one omission caused a short between pin 6 and the drain from the other channel's mosfet. The problem with these boards is that the parts are on one side and while flipping the board to the copper side, it is too easy to get lost in all the columns and miss something. The morales of this story are: "Never be too certain about your wiring/soldering" and "Arduino is pretty resistent to my attempts to fry it :)".

Nice clean design! Let's determine for sure what voltage it is outputting to the MOSFETs. Write a very simple sketch that cycles a pin every few seconds and measure the voltage. You should get ground and VCC. If it is less than 4.5 volts (guard band included) your FETs will give you problems as they will not be properly enhanced. Here is why: The IRF520 is a Power Mosfet with 9.2A collector current and 100V breakdown voltage. The mosfet has a low gate threshold voltage of 4V and hence commonly used with microcontrollers like Arduino for switching high current loads. You may have to get a different MOSFET with a lower gate threshold. Note there is some variation in the devices so they will not all but the same but will meet the specification. The 10K pull down resistors is a great addition and guarantees your state during reset until it is set up.

Get a good digital O'scope. They are incredibly cheap these days, and pay for themselves pretty rapidly in reduced frustration and time spinning one's wheels. I recently got a Hanmatek DOS1102 dual-channel 110MHz, and I haven't used my old analog Tek2236 since

Not the answer you're looking for? Browse other questions tagged pwm arduino-mini or ask your own question.