I'm trying to compare a char array that I'm assembling to a string and I'm having trouble comparing the strings.

I'm getting the data for the char array as a set of bytes and I'm compiling it into a char array like this:

So grabbing each of the ASCII codes and converting it into a character as I add it to the buffer.

After I do that I'm trying to print the buffer to the monitor and then compare it to a string. Though it's not working: 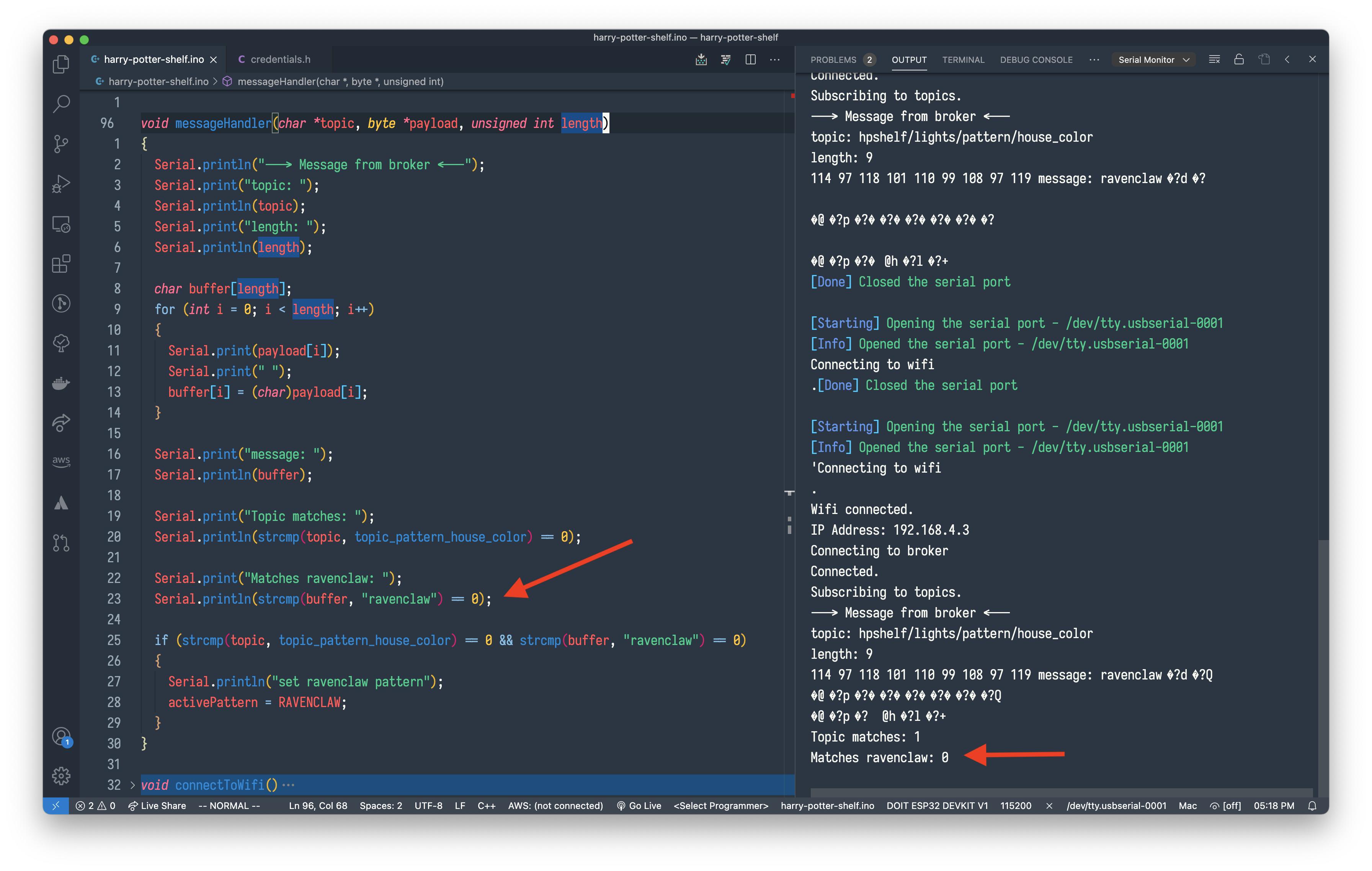 I know I'm getting all of those extra characters in the println b/c the buffer doesn't end in 0 so print keeps reading out memory bytes till it hits the zero, but I don't know why strcmp isn't showing the buffer matching the string "ravenclaw".

I'm sure it's for the same "missing the null terminator" issue, but I'm not sure how to fix it. Help is appreciated!!

You seem to already understand that it's not null-terminated and that's why it's not working the way you expect. So, I'll take a different tact for "how to fix it".

You can simply not treat the payload as a string, and instead use memcmp, as in:

memcmp behaves similarly to strcmp, except that it isn't looking for a null terminator. It just compares however many bytes (chars) you specify. In practice you may want to use a variable to hold "ravenclaw" and to strlen() on it rather than specifying the length separately as I've done above, e.g.:

or any number of variations on that which might use strlen(), or a pointer rather than array (if not using sizeof) or PROGMEM with strlen_P() and memcmp_P() or... etc, etc, possibly putting this into a function so you can reuse it.

As a side note, if you know payload contains non-null-terminated text that you want to print, you can use the overload of write() that allows you to specify the length.

The easier way to simply the code is to use strcpy to create a buffer that is 1 byte longer than the length and then terminate it with \0.

Not the answer you're looking for? Browse other questions tagged string array c-string or ask your own question.

1
Why is the result shorter than expected when I do longString.toCharArray(bigCharArr, longLength)?
0
Convert string into char array in Arduino?
1
remove weird chars from char array ESP32
2
Arduino String: use a non-null-terminated char array?
0
Weird behavior with char/uint8 arrays
2
char buffer to String in Arduino UNO
1
String comparison problem
0
Reading bits from a const char pointer
0
esp32 crashes when trying to dereference a pointer value