I'm Trying to grapple with types between two different libraries.

The gist is that I'm using the ArduinoWebsockets library to receive information coming from my api that I then want to render out to an LED matrix. An example message would look like this:

It's important to point out that the data here is a list of string version of numbers, not integers.

I.e. if you look at the binary version of 1 from the list it's actually 110001 which is the ascii code for the character 1.

This is because the message coming back from the websocket server is pulled out as a const char *.

The LED matrix function I'm calling has a signature of:

So I need to send in the values as unsigned chars.

And I'm not sure how exactly to do this. I've been grappling with the type const char pointer vs regular char pointer and how to properly parse the return delimited string.

Any help would be greatly appreciated!!

Based on some of the comments I don't think I explained the reason I'm trying to do this conversion very well. Here's (hopefully) a better explanation:

The reason I want to convert it is because I'm not displaying the number character as a string, I want to use the binary representation to control the lights in a row of the matrix.

The idea is that I could send over rows of numbers where each row corresponds to the row on the LED matrix.

But the messages I get from the websocket server are coming through as the string representations of the numbers (ascii or utf) vs the numbers themselves, so I can't just pass the numbers into the function for the led matrix because the underlying binary is different.

So I've been on a big troubleshooting journey. When @ocrdu said:

BTW I would try to get the websocket to send the correct single bytes instead of string representations of numbers, if at all possible.

I thought "yeah, that's the real way of fixing it and understanding what's going on", so I started tracing the issue back. Without going into all of the detail it turns out that the problem I was having was actually starting at the test client.

I use firecamp and websocat as websocket client testing tools. I was trying to send the binary data via both tools, but when I dug in via Wireshark I found that the data in flight coming from the client itself was made up of the hex values for the encoded characters of the 1s and 0s. 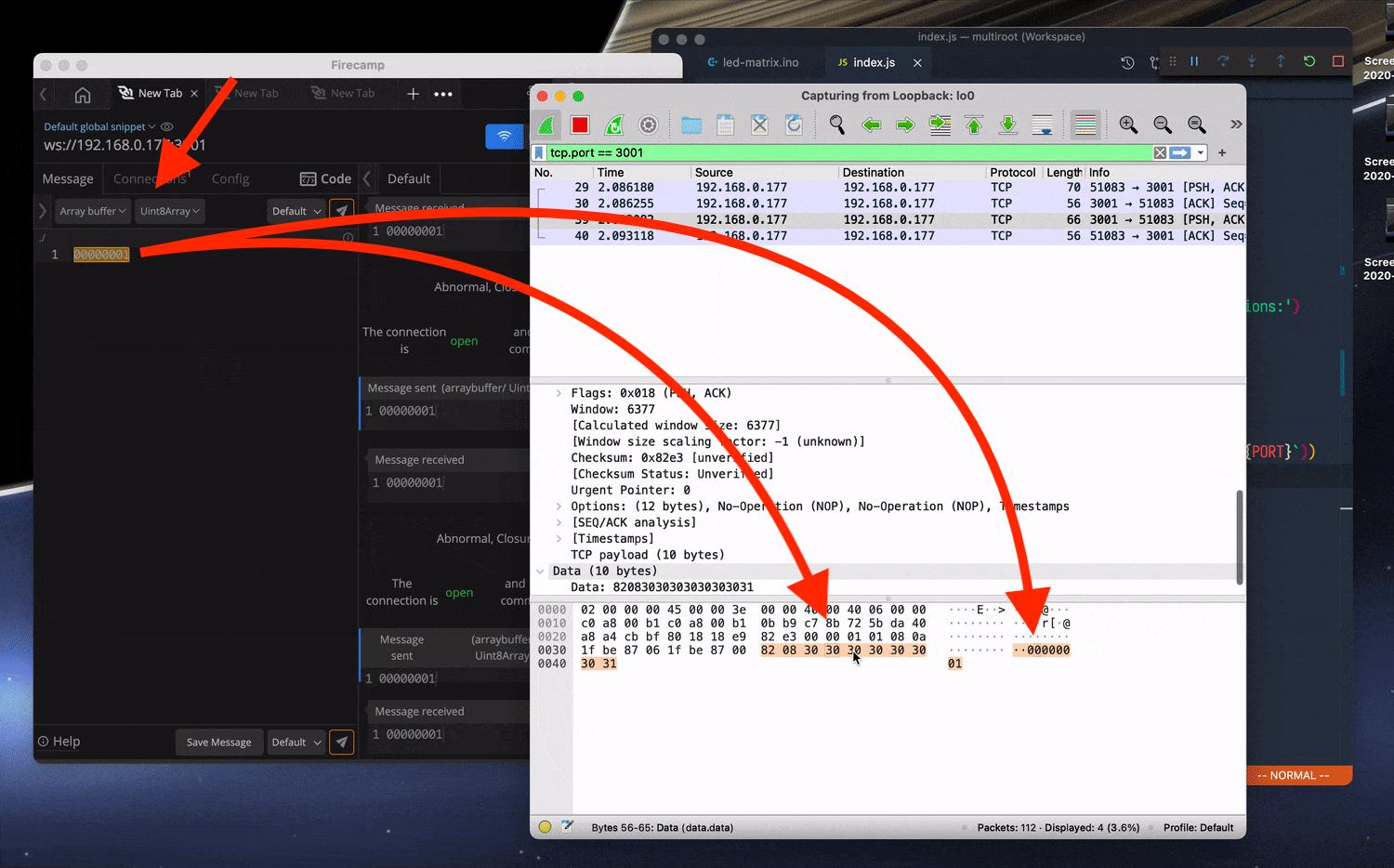 After researching and asking a separate stackoverflow question I figured out a way of sending the actual binary data from the client, specifically printf.

Now that this works I can start going back through the rest of my arduino code and have it parse the binary data directly instead of converting the encoded values to their binary counterpoints.

All of that said, I do appreciate all of the help. I may not have needed to do the conversions for this particular instance, but I want to get better with my C types, conversions, and general understanding so the knowledge gained here is still beneficial. Thanks everyone :bows:

Not sure if or why you want to convert char* to int, but if you need to, there are atoi(), atol(), strtol(), strtoul() to consider, or rolling your own function.

Pros and cons are discussed here. Main thing to note is that atoi() and atol() have no error handling, but if the char* you feed them is completely under control and predictable, that need not be a problem.

BTW I would try to get the websocket to send the correct single bytes instead of string representations of numbers, if at all possible.

Not the answer you're looking for? Browse other questions tagged string pointer or ask your own question.

2
Print string from arduino to serial monitor
0
Remove certain characters from char*
0
Why is integer-to-string not working in this sketch?
0
Benchmarking String.toInt() vs Checking individual characters gives unexpected result
0
Printing char array from array of structs in progmem to serial
2
Arduino String: use a non-null-terminated char array?
1
How to Sort a String with Number by Ascending
1
Issues converting an uint32_t into a char*
1
strcmp doesn't seem to work
1
converting an unsigned integer into a const char pointer