So the task is to control 12v DC motor.

With first button, you can add up motor speed by certain speed step.

With second button, you can slow down motors speed by certain speed step.

With third button you cant speed up motor to its max, but problem is there that i must be done smoothly. For example i press third button and in motor starts to spin faster and faster till it reaches max speed. But now when i press this button motor jumps to it max, and i don't know why. There is no smoothness.

I cant use delay, must be done by millis 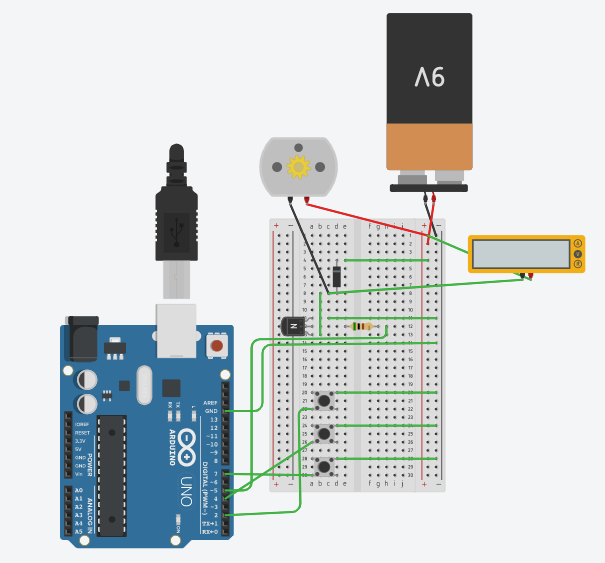 I suggest using a different logic in your program. I would first divide up the different parts of the project:

This division between "input code" and "output code" is rather common, since it often makes your code better structured and makes it possible to easily add new inputs for one single output.

We also need a timestamp variable for using millis() to regularly setting the PWM output according to the set point and the corresponding interval (here as a define). Additionally we also define the increment, with which the PWM value should be incremented on each sample:

We are doing all this in the global scope. Now in the loop function we first check for millis() and the timestamp (which gives us a regular sample interval for the motor speed) and then check, if the current speed is higher or lower than the setpoint and change the current_speed accordingly. At the end we write the value of current_speed to the output:

Now lets look at the first part (reading the buttons for changing a variable). At your current code, you need to hold the button down for the value to change. From your text is guess, that you want a click behavior (1 step in speed for 1 button click, meaning button press and release). For that I suggest using the Bounce2 library, which will handle the buttons - especially the debouncing - for you:

Inside the if(bounce.fell()) statement, you would handle the action for the button click, in this case: updating the speed_setpoint variable. Define an increment value for the buttons and do the increment/decrement in the if statements. In global scope:

In the loop() function:

Now you need to put all this together. I will leave that to you. You can then tune the behavior to your liking by changing the defines.

If not delay then you'll probably have to use something like an H-Bridge. L298N is a good place to start. You can use PWM to control its speed and its gradual too.

Not the answer you're looking for? Browse other questions tagged motor millis or ask your own question.

5
millis() function with a button press
1
Is it possible to replace this delay with millis()? (And issue with other millis loop)
0
What am I doing wrong with my millis()?
1
Cycling LED's for specific time period with millis()
1
Calculating with millis()
0
Using millis() to time the start / stop of a DC motor
0
restart counter of elapsed millis willingly with read
1
Random Blink with millis()