I have a question regarding the LM35. The sensor is supposed to have values that are to be directly proportional. But instead of the temperature increasing, the sensor values decrease.

This is my setup below. It seems to be a standard setup in different LM35 tutorial pages.

These are the results. From room temperature, I applied heat through the use of a lighter and it went lower instead of higher. 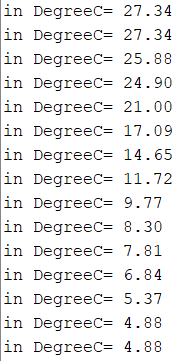 I read somewhere that it has something to do with the power supplied by the Arduino. However, when I used a 12V supply to power the Arduino, the readings became very erratic and unstable.

I have finally returned from the city (Took a long time because of Quarantine Restrictions) and I brought 3 LM35 from another shop. All 3 of the new LM35 worked as intended and didn't lower its temp reading when exposed to heat (With the same configuration). I could rule out these possibilities as to the reason why the LM35 didn't work.

1. Manufacturing Defect - all three of the LM35 didn't work as intended. They all had their temperature lowered when exposed to heat. There could be a defect in the manufacturing process because it doesn't work as advertised. (Leaning towards this)

2. Static Electricity - I remember receiving the LM35 in a plastic bag as packaged by the shop. It could have been affected by static electricity and damaged the circuit inside (on all three though?). The LM35s I received recently had been packaged in those electrostatic discharge protection packaging so it could have probably contributed to it? I need more insight on this I apologize for not being able to properly word it out.

There could be more but these are the most I could come up with as a conclusion.

You are reading A5 but in your diagram you show it hooked up to A0: 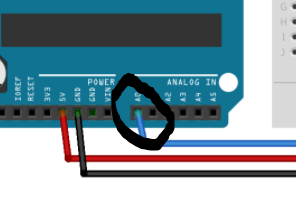 Change your code to this and I believe it will work:

The data you are reading from A5 is indeterminate and just happens to decrease as A0 increases.

Ok, so you corrected yourself and are reading the correct pin in spite of what your schematic shows. Please explain this:

I think you want:

You are carelessly mixing floating point and integer math.

2
Help with getting Sensor Average using Arrays
2
LM35 readings are erratic
7
Fluctuating readings of LM35 temperature sensor (+- 5°C) with Arduino UNO
0
Connecting HC-06 and LM35
0
my LM35 temperature sensor gives weird measurements,
1
Help combining digital and analog code in arduino programming
2
How do I add Gyroscope, Accelerometer, Euler, and Temperature data to one Arduino board?
1
Why does my delay get inaccurate after one minute ? It makes my servo vibrate