Can anyone help be get readings off of my potentiometer with a push of a button?

Hi I'm trying to get my Arduino Uno code to work with a in a specific way where if I push a button, the Arduino will read the raw potentiometer value once and if I don't push it nothing happens.

I had a very similar issue an it is that you aren't setting up your button as an INPUT_PULLUP. When you press the button, you are sending 5V or ground through it depending on your circuit. But then it won't reset on release. That is why either you can put a physical resistor as the schematic shows here: 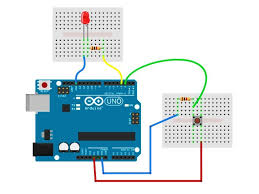 or you can simply change the button initialization to INPUT_PULLUP.

There were several issues with your code:

Here is a revised version of your code, compiled and tested. You'll find notations in the comments where I made changes:

I believe you are getting lots of readings when the button is pushed but nothing when released. This link should solve your problem.

Not the answer you're looking for? Browse other questions tagged arduino-uno button potentiometer or ask your own question.

2
Problem with a digital potentiometer application
0
Arduino code to control 4 led's from 4 buttons
0
why data value is 0
1
having problems with my arduino bluetooth car project(with L298n Motor Driver)
2
How do I add Gyroscope, Accelerometer, Euler, and Temperature data to one Arduino board?