What are patterns of bits sent to or read from GPIO pins called?

I want to call them “words”, but I’m uncertain if this is how they are referred to in documentation for the use of a header board that might plug into an ardino board.

So if you have a sequence of ONs and OFFs being read or sent from a microcontroller board are those called words? What are they called?

Here is a simplistic diagram.

Larger than 8 bits is usually referred to as WORD. 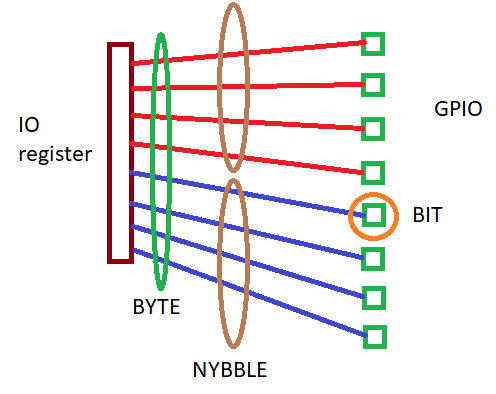 Consider backing away from Arduino hardware for just a moment

For most computers and processors a word is comprised of bytes and bytes are comprised of bits. A bit is an individual 0 or 1. That's always true. A byte is almost always made up of 8 bits. Why? Because it is always convenient to do things on a computer or processor in powers of 2. That is, 2 or 4 or 8 or 16 or 32 or ... (keeps going). And 8 is a convenient sized number of bits! A word is usually 2 bytes or 16 bits. But that's not always true. For some computers it is more.

Keep in mind, so far, we are just talking about data. Not physical GPIO pins. When we do interface through the GPIO pins this data can be sent out in parallel or in serial form. It really depends on how we want to interface with the world! For instance, many Arduino projects uses a serial interface called an I2C bus to talk with peripherals such as a temperature sensor.

So if you have a sequence of ONs and OFFs being read or sent from a microcontroller board are those called words?

This sounds like you are talking about serial data (as apposed to parallel data).

Not the answer you're looking for? Browse other questions tagged arduino-uno header or ask your own question.

0
PC <-> Xbee <-> Another Xbee Communication
0
Sending data over TCP connection in one piece
0
Using Atmel Studio with Arduino Starter Kit (Uno MCU)
2
Arduino Uno: Sensor shield powering multiple servos
7
Arduino as a real device to computer
2
What are these wires called?
0
Connecting multiple component's VCC wires to one Arduino UNO R3 5V Pin
0
Arduino sends bad data ONLY when not connected at the launch my application
1
How to implement Arduino NANO as a RS-232 to USB adapter (Or do I need a Arduino Mega?) For 3D printer comms