Issues converting an uint32_t into a char*

I'm using a capacitive touch sensor that as 12 touch points and stores it's state data as a binary number. 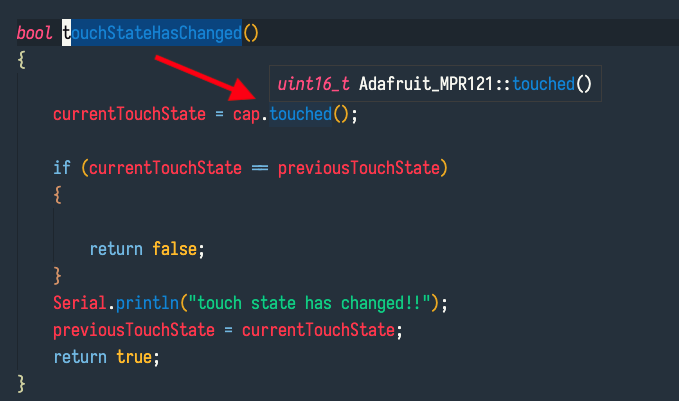 I want to take that state, add a bit of data onto the front, and then send it up to a server via websockets. I'm using the Arduino Websockets library for my websocket client.

The library has a sendBinary method that allows you to provide a character pointer for the data. 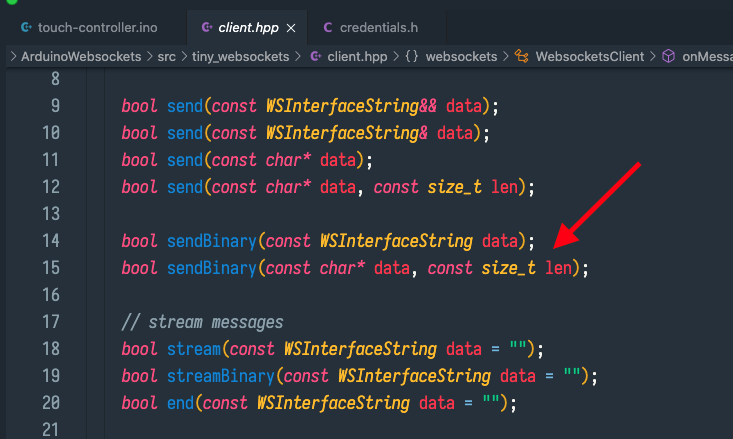 So, I wrote a function that makes a new 32 bit unsigned integer, adds my metadata, then the touch state, and then attempts to take the address of the payload integer and cast it to a character pointer:

The issue is that while the integer version of the payload looks fine, when I try to cast it into a character pointer the contents is wrong.

I've also tried creating a payloadPointer and directly set the address of the integer as the pointer address, but this also fails. 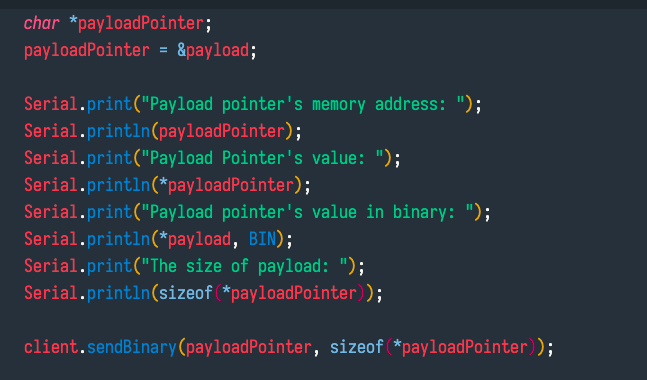 (I should take this moment to say I'm still pretty green to arduino cpp concepts like this).

What's the right way of doing this? I'm reading up on pointers and trying to understand how to properly do it, but I can't quite figure it out. Could someone explain the correct way of doing it and why? I want this to work, but more than that I want to understand the "why and how" of the proper way.

Your code with sendBinary is probably fine, as long as on the other side you also use a function that expects to receive exactly 32 bits of binary data (in little-endian format).

Trying to print (char*)&some_32bit_int on the other hand will not do anything useful.

The short version is this:

Functions that expect a (C) string expect it to actually be a C string, i.e. a sequence of chars ending with a null byte (0x00). The chars are expected to be mostly ASCII printable characters. If you give them just plain raw data like the memory address of an int, you won't get what you want.

Trying to print raw data using a function that expects a C string will result in garbage (or nothing at all, or a lot more garbage than you expected!). (Details in the second part.)

If you want to format your data into a string for sending (using a string/text protocol), then use functions like sprintf to do the conversion. (Or use a library that does JSON if your receiver is a web thing - that's pretty handy.)

Then send buffer via a function that expects a C string.

The first line initializes a 32 bit int to a specific value, 0x00323130 in hex. Now let's assume that payload was stored in memory at address 0x0100. The memory after that assignment would look like this:

Those four bytes get send over the wire (or the air) exactly as they are. Nothing more, nothing less. If that's what the receiver expects you're golden.

Now if you do:

Serial.println is an overloaded function. When you give it a char *, it expects a C-string, which is a series of characters terminated by a "null byte", i.e. a byte value of zero. Serial.println will then look at the first byte pointed to by the argument. If it's zero, it stops. Otherwise it outputs that char to the serial line, and moves on to the next character. Repeat until a zero byte is found.

In the specially crafted case here with that specific value of payload, Serial.println would receive address 0x0100 and:

So in this fabricated scenario the output on the serial monitor would be "123".

In short, Serial.println will output exactly the bytes it finds in memory to the serial, until it encounters a zero byte. The serial monitor will try to display those bytes. But, unless you've crafted those values very carefully, all you'll get out of it is garbage - relatively few 8bit values map to printable characters, and even when they do they won't "look" anything like the raw data you had.

If your number happens to start with a zero byte in its binary little-endian representation, Serial.println won't print anything - like if you had given it an empty string.

If your number doesn't contain a zero byte, it will keep on reading memory past the storage allocated for payload until it finds one - possibly outputing much more "junk" than a 32bit variable could ever contain.

Your attempts to print binary data are wrong.

A print() of the 4 bytes of uint32_t as char array will print 4 characters which ASCII codes are in those 4 bytes and then continue print characters from memory after the variable, until a byte with 0 is read. Some of the characters can be a not printable terminal control characters.

A Serial.write((char *)&payload, sizeof(payload)); will print 4 characters which ASCII codes are in those 4 bytes.

The simplest way to visualize your binary payload is Serial.println(payload, BIN);. This will print the uint32_t value in binary.

Not the answer you're looking for? Browse other questions tagged pointer or ask your own question.

2
How can I pass a char array as the parameter to a function?
2
Dereferencing char into a struct
0
Remove certain characters from char*
0
How do I properly convert a pointer (uint8_t* or void*) to a "normal" integer?
1
Creating an array of structures which store bitmaps to work with u8glib
2
Compute SHA256 of string and output to string
2
Converting c string to integer to unsigned char
0
Accessing funcition in object via `->` is crashing (resetting) Arduino
1
converting an unsigned integer into a const char pointer
0
esp32 crashes when trying to dereference a pointer value