Dimming this ~30V led with PWM, what do I need?

I have a street lamp with a led and simple driver in it, I don't know the exact led voltage but the driver (image attached) says 27-36V DC output, MODEL: 50W.

Is there a part I could place between this driver and the led, so I can control dimming by Arduino via PWM ?

I thought it would work to put this "PWM power module" between the driver output and the led, but (I tested months ago) I remember it started to blink, I think only when decreasing power but not on full power (controlled by PWM with arduino).

The specs on the PWM module are these: 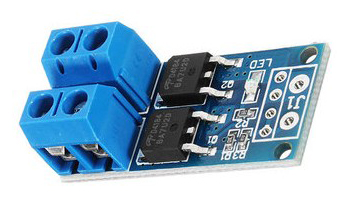 It will not be possible for you to PWM dim your LED with that LED driver (power supply).

That is a constant current driver with under/over-voltage protection. It delivers a specific amount of current (1.5A) and varies the voltage to allow that to happen.

If the voltage rises too high or falls too low then there must be a fault, so it shuts the power off. This is usually because there is either a short (LEDs tend to "fail short") or an open circuit. The former causes the voltage to drop too low and the latter for it to be too high.

When you insert PWM control you alternate between driving the LEDs and an open circuit. If that open circuit persists too long (low duty cycles) the driver will shut off.

You will need to replace the LED driver (the power supply) with one which includes PWM control internally to it.

If you buy a 30V current-limiting power supply set to limit the current to 1.5A, you should be able to use it to power your LED light through a high power logic level MOSFET. You could control the MOSFET with a PWM signal from an Arduino and use that to vary the brightness of your light. With a little googling I found an adjustable power supply with an output ranging from 0-30V and a power rating of 0 - 1.5A https://www.canakit.com/r182-0-30v-0-1.5a-adjustable-regulated-power-supply.html

It does not look to be weather-proofed like the one you show however, and you'd need to make sure the heat-sink was able to dump enough heat to prevent it from overheating.

Not the answer you're looking for? Browse other questions tagged power led pwm current voltage or ask your own question.

0
analogWrite never outputs a non-zero voltage
0
MOSFET to dim LED backlight
1
Will 12.6v really damage my arduino?
1
How can I dim a 10w LED?
1
PCA9685 seemingly no PWM output Arduino Uno when attempting to do LED dimming