I need 48 sg90 servos to move to a specific position each minute. Now I am using two arduino mega boards to power everything through 6 bread boards but it seems I need more power because some servos are ticking and are delayed. I cant get the external power supply to work independently of the computer. Once I unplug from my computer the servos jitter. Any help would be greatly appreciated.

Most servos use an analog signal (width of a pulse) for positioning. Any perturbation in that signal will cause unexpected behavior. Activating 48 servos simultaneously will likely indirectly or directly affect the analog signal. 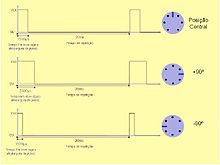 The unexpected behavior might be mitigated through changes in software or hardware. These mitigation efforts may include:

These are only 3 options to consider. Many more exist but may not be pertinent to your situation. More information is needed.

Not the answer you're looking for? Browse other questions tagged power servo or ask your own question.

0
Power Supply for 30 Servos
0
Disable SCK temporarily to save power
1
Communicating between two Arduinos wirelessly only works when both are connected to the same computer
0
How to fix Arduino restarting when two servos are powered by an external power?
4
Useless box wiring and code
0
How can I make a Parallax Servomotor move a water tap correctly and prevent from vibrations?