Can Only Upload Arduino Sketch Once to Custom Mega2560 Board

I created a custom Arduino based off the Mega2560 R3. It uses the ATMega16U2 uC as the USB interface between ATMega2560 uC and the PC.

The bootloader on the 2560 is uploaded by using an Arduino Micro via ArduinoISP. I followed this tutorial from Instructables on uploading the bootloader/firmware for the 16U2 except I modified some parts for the 2560 instead of the UNO. Here is my added section in the /program Files (x86)/Arduino/hardware/arduino/avr/boards.txt

The problem is after I upload a sketch (with a size say over 10 kB), I can't upload any new sketch and get this timeout error message instead as shown below. Not even a simple blink sketch. The TX and RX LED connected to the 16U2 uC that flashes during an sketch upload doesn't even blink once.

The only way I can get it take another sketch is to "re-flash" the bootloader on the 2560 uC via ArduinoISP. The TX and RX led now flashes during the sketch upload. Of course, this is a huge hassle as I don't want to do "re-flash" the 2560 bootloader every time I want to upload a sketch.

I don't have this problem on my Elegoo Mega2560 R3 clone board so I'm thinking it might be something wrong with my 16U2 firmware/bootloader. Anyone have any idea what else might be causing this? 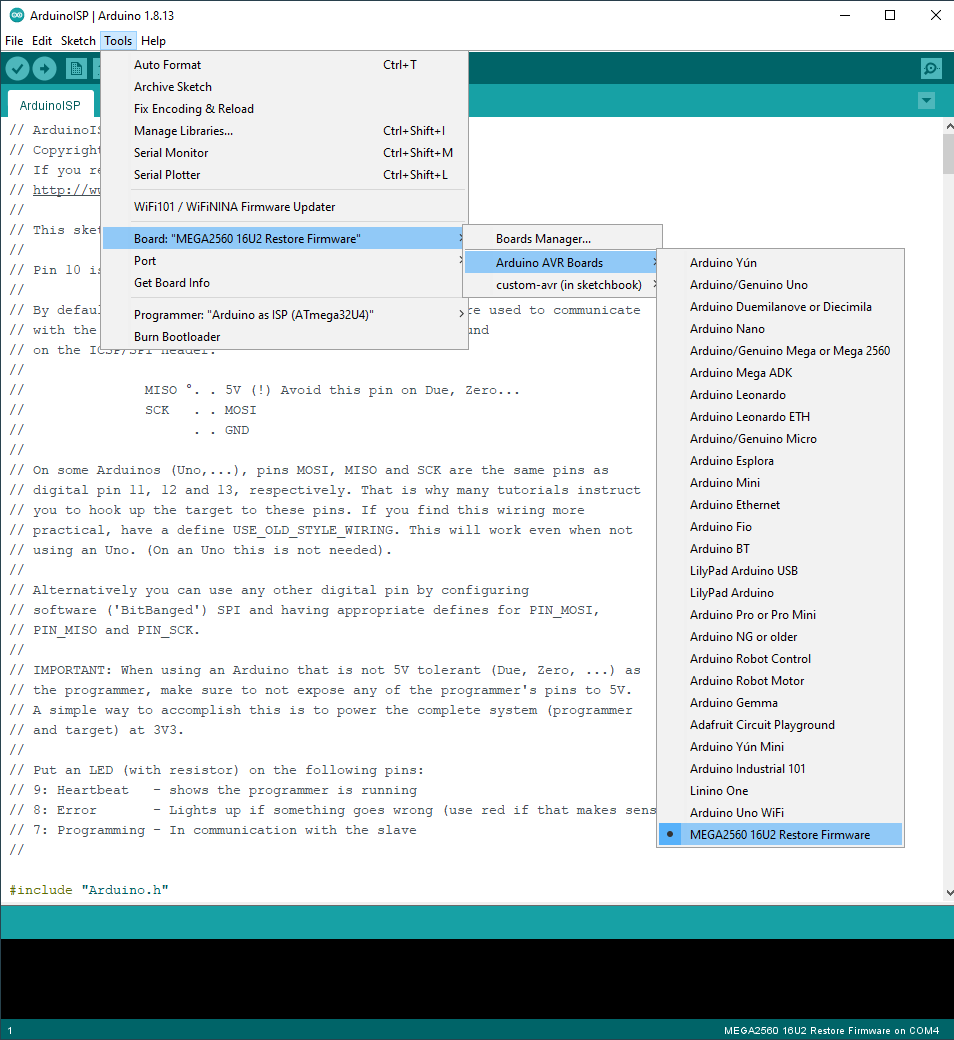 Your RESET circuit is wrong.

That means your 16U2 will not be able to trigger a reset of the ATMega2560 to run the bootloader.

Remove the pulldown on D7 of the 16U2 and add a 10kΩ pullup to the RESET pin of the ATMega2560. Without that pullup:

On the Mega2560 reference schematic RN1A is the pullup in question.

Not the answer you're looking for? Browse other questions tagged arduino-mega bootloader atmega2560 firmware atmega16u2 or ask your own question.

1
How do I install the firmware on an Arduino Mega clone?
0
How to test Arduino board?
1
Can I place bootloader directly onto Atmega2560 and have USB?
2
Nick Gammon's Hex Converter Error
2
Error while boot loading Atmega 2560 using Arduino Mega 2560
0
Trouble programming custom ATMEGA2560 board
0
How to unbrick an Arduino Mega+ESP8266 Wifi