None of the pins work as inputs

5 volts are being supplied from pin 6 to a 300 ohm resister in series with one led. This circuit returns to the analog input pin A0.

It'll admit it's a strange set up and I was told to use a pass through filter to read the signal.

At this point I'm not concerned with whether the program reads the right values, so despite the code involving the serial monitor I'm just trying to figure out why the led won't turn on anymore.

I'm trying to figure out now what changed after I unplugged it last to create a now open circuit.

This is what I did to trouble shoot:

With the same sketch running on the board...

I connected a jumper from pin A0 to ground and the serial monitor switched from a bunch of random values to a solid 0. So it recognizes input still... in a sense.

Then I modified the sketch...

This gave the same result. The led wont turn on anymore unless the circuit ends are connected from a voltage source to ground.

Previously, any pins configured as INPUT would not only read consistent values but also complete the circuit, turning the led on.

Each pin that can be configured as an INPUT acts the same way.

The only thing I did between the times when it was working and wasn't was unplug and plug in the board...

Setting a pin as "output" mean it'll either supply +5V ("HIGH") or 0V ("LOW"). Both those states are considered "outputs", and the pin can source or sink current in those states. When driven "LOW", the circuit does "input" current to the chip, but that's not what "input" usually means.

"Input" means you can use the pin to read the voltage applied to the pin. When connected to a PWM source, this might manifest as the pin quickly switching between "1" / "HIGH" / "+5V" and "0" / "LOW" / "0V". Normally, you would use the "input" mode to read things like switches, or potentiometers on the analog input pins.

Your desired use of "current input" pins will require you to configure the pin as "output", and then set it to "LOW", which will make it able to sink current.

The LED would glow only when the pin is configured as an OUTPUT or it would be very dim in INPUT mode. This is because INPUT mode sets the pin to a high impedance state, suitable for reading voltages and not for driving circuits requiring current.

Setting a digital pin to INPUT mode, allows you to only read voltages as 0 or 1 which correspond to 0V and 5V respectively. For example, upload the code below to your Arduino and open the serial monitor. Now, by connecting Pin 11 to GND the serial monitor should display 0, and by connecting it to 5V, it should display 1. If this doesn't work something may be wrong with the Arduino.

However, I would recommend that you share your code and diagram before concluding a fault in the Arduino.

In your second update you described the following circuit: 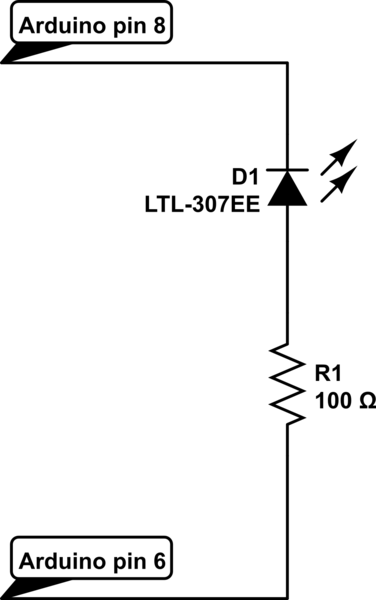 Then in code you are doing digitalWrite(6, HIGH);, which sets pin 6 to HIGH/1/true/5V. Pin 6 is configured as output, pin 8 as input. In this situation the LED will not light up. A pin, that is configured as input, will not draw or source current (except a very very small amount). The input pin behaves somewhat like a little capacitor to ground (so in principle nearly no current can flow). Thus no current is flowing through the circuit. No current also means, that the LED does not light up (it needs current for lighting up) and no voltage drop will happen on the circuit. The circuit will not be "completed", as you phrased it. Thus your input pin will also get HIGH/1/true/5V, which is what you then read on in the code.

When you instead change pin 8 to output (pinMode(8, OUTPUT);) and set it to LOW (digitalWrite(8, LOW);), the LED will light up, as now the voltage difference is the full 5V (from HIGH at pin 6 to LOW/ground at pin 8). If you now read the pin with digitalRead(8) you will just read, what you have written to it, meaning LOW/0/false/ground.

You might also have tried to use digitalWrite() with a pin, which is configured as INPUT. That does not really output anything. Instead it activates or deactivates the internal pullup resistor of the pin. As I remember, this pullup resistor is between 20 and 50 kΩ, so again you cannot get enough current to light an LED through that pin. The internal pullup resistor is then like an additional 20 to 50 kΩ resistor from the corresponding input pin to Vcc (5V in your case). If nothing else pulls on the pins value, the pullup resistor will pull the value of the input pin to HIGH/1/true/5V, so that you don't have a floating pin (see below for an explanation of that term).

The next scenario: Using analogRead()

Here you first tried to read an analog pin (A0), which was not connected to anything. That is called a floating pin. There is nothing, that gives this pin a definite value, thus it catches whatever electrical noise comes around, from the microcontroller, from other pins, from the circuit or from outside. A floating pin can change it's value rapidly and randomly, depending on the noise, which comes around. Thus you will get very different and varying values here.

Then you connected A0 to ground. That gives the pin a definite value (LOW/0/false/ground). Thus you now only read zero as value.

If you are doing the analogRead() with a circuit similar to the first case (with the LED between two pins) you will get a similar result as with digitalRead(). An analog input will also not source or draw any current (besides a very very small current). Thus you cannot "complete" a circuit to light an LED on the path.

A PWM signal is nothing else than changing rapidly between Vcc (5V in your case) and ground. The value, that you give the PWM signal via analogWrite(), defines the duty cycle of the signal, meaning the ratio between the HIGH and LOW portions in the signal. The function name analogWrite() is unfortunately very misleading, as you don't really output an analog voltage. Most Arduinos don't have the hardware to do that, so analogWrite() uses PWM to output a pseudo analog voltage. Devices like motors are not fast enough to react to the fast voltage change, so you can change the speed with PWM. LEDs are fast enough, but the human eye cannot see the individual on-off cycles, so you see the LED being dimmed with lower values.

But the analogRead() function (which uses the ADC hardware internally) is fast enough, thus you would only read a series of changes between 5V and ground, when reading a PWM signal. You could build a low pass filter, which will filter out the PWM frequency and give you a real analog voltage, which you can then read via analogRead(). Though keep in mind, that this makes it slower, so you cannot read fast changes with that. A low pass filter looks like this:

The PWM frequencies of the Uno are 977 and 490 Hz, below the cut-off of the filter you drew. Per the ADC's specification, you can safely increase R1 up to 10 kΩ, which should put the cutoff low enough to attenuate the PWM frequencies by at least 30 dB.

If you don't want to use extra hardware, but still want to read the PWM signal, you need to read the pulse length. For this there are multiple ways, depending on the requirements. You can use pulseIn(), you can use interrupts and take timestamps, you can use the capture mode of a hardware Timer.

Unfortunately this is not possible. The pins must behave like I described above. As electronics not break and then just magically unbreak, you must have done something different. An input pin (digital or analog) will not source or draw enough current to light an LED.

You may have damaged something, though I cannot really say, if that is really the case or if you are just doing something wrong there. A potentiometer has to be connected like the following: The outer pins to ground and 5V respectively, the middle pin directly to the analog input. Nothing else. You might check, if that is, what you did.

Besides all that, you didn't really state, what you are trying to achieve. As you already acknowledged in your question, the described circuit is not typical and a strange setup. To light an LED, you would just connect it to the output pin (via the resistor) and on the other side to ground.