How to wire a three-pin on-off-on switch for reading input?

I would like to read the output of an on-off-on switch with my Leonardo board, but I have very little knowledge of electronics and don't know how to wire it up.

This is the switch in question: E-Switch 200MSP4T1B1M1QE

I don't want to power anything in a literal sense, I only want to have the Leonardo read the output of the switch. The end goal is to have the two ON positions read as separate button presses (eventually using a joystick library, in case that changes how the switch needs to be wired).

One final note - I'm not using a breadboard, but connecting the wires directly from the switch to the board.

You talk about wiring a switch to control lights directly. Instead, you want to use your switch to send information to your Arduino.

You need to force each input to either ground or +5V when it's not connected to anything, or it will "float" and you'll get semi-random high and low readings.

I suggest setting the Arduino input pins to INPUT_PULLUP mode. That connects the inputs internally through a resistor to +5V. If you don't connect anything to the pin, it reads as HIGH. When the button is pressed/switch is closed, it reads LOW. That might seem a little confusing, but it means you don't need external resistors.

You'd then attach those to pins to the two outer pins of your switch, and attach the center pin to ground (GND).

It is also possible to wire your switches using INPUT mode, not INPUT_PULLUP, and have them read LOW when the switch is open, and HIGH when closed, but to do that you'll need external pull-down resistors. (And wiring it will be a little painful without a breadboard or PC board.)

To answer your questions:

You don't show a wiring example. You talk about how to wire a switch to switch power to a pair of lights directly, without using a microcontroller. That's not relevant here.

It would make sense to use it as a digital input, since you need it to give you 2 states, open and closed.

You need to connect the center pin to either ground +5V, as discussed above.

I suggest this simple circuit:

Set both inputs to INPUT_PULLUP. If the input reads LOW, that means it has been grounded by the switch.

Edit: Per Duncan’s request, here is the alternative circuit with the polarities inverted. With the switch’s common connected to Vcc, the inputs should be set to INPUT_PULLDOWN. However, most Arduinos do not support this mode, for lack of internal pull-downs. Then one has to use external pull-downs instead, and set the pins to INPUT.

With this circuit, a pin reads HIGH when it is connected to +5V by the switch.

For the on-off-on switch, the MSP-3 and MSP-4 operate as follows:

Here is an alternative way to connect the SPDT to the MCU which is useful when running out of pins because it only requires one input pin. It does however require more complicated software to interpret the input e.g., hysteresis and debounce could be implemented with thresholds such as:

In normal parlance, a throw describes a physical action that moves a mechanism to a new mechanical stop; and throws are distinct from stops and contacts. As such, a switch is a transducer that converts physical movements (throws) to an electrical signal via a system of mechanical stops and electrical contacts.

However, matters have been confused by a minority of people erroneously metamorphosing the term “throw” to mean “mechanical stop” or “electrical contact.” As you can see in this example—as is often the case—the number of throws equals the number of contacts, but that is not always the case. For example, if there were a centre contact for the centre stop, there would be three contacts, but still only two throws. Perhaps the fact that throws and contacts are often equal in number has led some people to conflate and confuse the separate entities. And perhaps that the number of stops can sometimes equal the number of contacts has led some people to conflate and confuse them too. For this kind of switch, the number of throws is always one less than the number of stops.

Matters are not helped by the E-Switch 200MSP4T1B1M1QE datasheet showing an incorrect schematic for the MSP-3, 4 and 5 that omits the centre mechanical stop that should be labelled OFF.

I’ve re-annotated the datasheet, Figure 3, and modified the following prose to comply with the common-sense approach of Figure 1, being mindful that a minority of people use “throw” to mean “contact,” and added the correct schematic for MSP-3, 4 and 5. (The original annotated version and prose was an attempt to use the datasheet’s own erroneous nomenclature and schematic.) 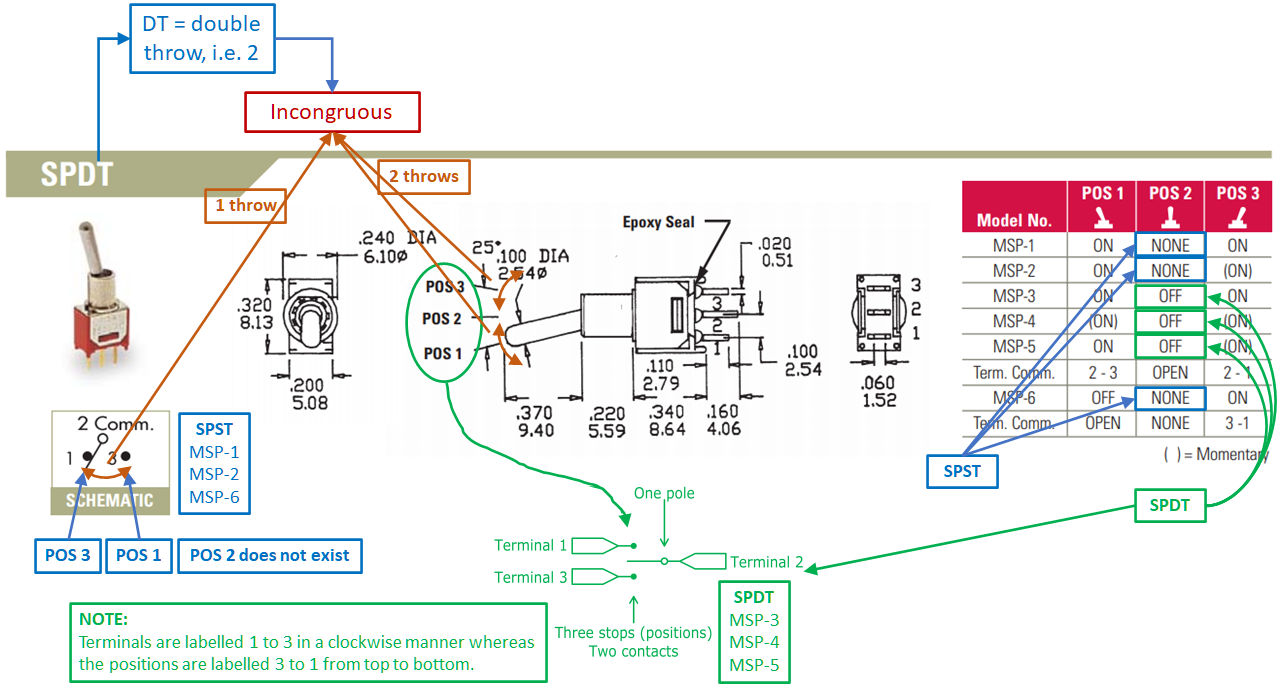 MSP-1, 2 and 6 are actually single-throw switches despite what the datasheet implies which conflates its description of its SPST with its SPDT switches (which caused some confusion in the comments about the intent and variety of the switch).

The switch required for the above example is the MSP-3 on-off-on. Or to simulate momentary button presses, the MSP-4 (on)-off-(on). Both of these are single-pole double-throw switches (SPDT), not because they have 2 electrical contacts, but because they have 2 physical throws.

In the context of the erroneous datasheet, throws and contacts are erroneously synonymous. In normal parlance, neither throws nor positions are electrical contacts/terminals/pins (though the datasheet has conflated them as well). However, each mechanical stop does have an associated electrical connection/disconnection that should be explained in the datasheet. Unfortunately, in this case, the table in the datasheet has conflated SPST with SPDT and used the term “NONE” to indicate that a position doesn’t exist for the SPST types (MSP-1, MSP-2, and MSP-6). For MSP-3, 4, and 5, notice how POS 2 doesn’t have an associated contact/terminal/pin in the green schematic, Figure 3.

From experience, the only way to be sure is to buzz out the switch with a multimeter (continuity test). So, keep Figure 1 in your mind and a multimeter in your hand, and you won’t go far wrong.

This answer has a attracted a phantom downvote with no comment expressing why this is warranted.

Does the phantom think:

Bear in mind that the terms “throw,” “stop,” and “contact” (their meanings and usage) are taught by schoolteachers to millions of school children every year; and used by billions of English speakers every day. Is the global education system (which isn’t perfect) wrong on this particular point? On what grounds and exceptional circumstances is a datasheet allowed to use such terms in an inappropriate manner?