Why do my Hall sensor readings change when I write them to the serial port?

I have a small project where I connected a Hall sensor (see picture) to an Arduino Mega. The blue wire is connected to pin 45, the red wire to +5V, and the black wire to GND. 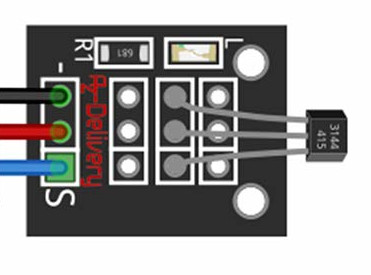 At the beginning I initialize the pin used to read the sensor as follows.

I have noticed that my program logic sometimes does not work reliably after seemingly irrelevant changes to the code. After commenting out more and more code to narrow down the problem, I came across the following discovery.

In the first implementation, I initially read out the value of the Hall sensor. Next, I send the value to the serial port. The serial monitor in the Arduino IDE outputs the number 1 (HIGH). This is the expected behavior as during testing there is no magnet nearby. Based on the subsequent program behavior I can confirm that the function returns false. I can let the Arduino run for minutes and the behavior remains stable.

With the second implementation I do not write the read value to the serial port. As expected, the serial monitor in the Arduino IDE remains empty. The function, however, now returns true. Apart from commenting out the marked line and flashing the sketch to the Arduino, I did not make any changes (again no magnet nearby). Also in this case I can let the Arduino run for minutes and the behavior is stable.

My first suspicion was that the delay caused by writing to the serial port is what makes the difference. I asked an electrical engineer whether Hall sensors might need short breaks between successive readings. He denied my assumption, and indeed, if I simply insert a delay(300); after reading the value (without writing to the serial port) the behavior does not change and is identical to implementation 2.

I can switch back and forth between the two implementations and flash them to the Arduino as many times as I like. The behavior is always as described above for both cases. I cannot make any sense of this, as the behavior seems to lack any (programming) logic. Has anyone ever made similar observations and can give me a hint what might cause this? Thank you in advance.

I haven't found the problem yet, but I have come a step closer. The issue has reappeared in a similar project on the same Arduino. I use a new Hall sensor with pull-up, which is read out wrong again under certain circumstances (always read out as LOW, no matter if a magnet is nearby). The problem seems to occur only when I use a certain pin. The pin in question on my Arduino Mega this time is pin 37. If I connect the Hall sensor to another pin (I have tested 34 and 36), it works fine. If I connect a previously working Hall sensor to pin 37, it will not work anymore (always evaluated as LOW). The only explanations that make sense to me at the moment are that either the Arduino Mega is damaged or that there are side effects, maybe caused by external libraries using certain pins without my knowledge and incorrectly initializing them.

You can use the internal pull-up resistor by using pinMode(HALL_PIN, INPUT_PULLUP);

Not the answer you're looking for? Browse other questions tagged serial hall-effect or ask your own question.

2
Why does serial port stop sending data?
2
Print string from arduino to serial monitor
3
if(Serial) not working correctly on micro or pro micro
0
Arduino Serial Monitor works but not on PySerial and PuTTY
2
Write to serial only if the state of a light sensor changes
0
How can I compare two serial port readings on Arduino Mega?
0
Serial monitor when port is being used by another application
2
What is the difference when an arduino has been unplugged vs when a serial port connection was closed?
0
How to get started with writing code for a Hall Effect sensor?