Relay + Arduino uses too much power for battery to handle. Which solution is best?

You can see in my crumby schematic that I am using a Non-latching relay to turn on a 3A circuit (one of them arc lighters), which is powered by a 25C (supposedly) lipo battery. That same battery also powers an Arduino through a TP4056. This works fine when I first turn it all on, but once the relay is activated by the Arduino, the lighter + Relay only turn on for a split second before stopping (when the Arduino is powered via USB, it works fine). I am thinking that the Arduino+Relay+Lighter is too much for the battery, even though it claims to be 25C. It is just strange because the Arduino+Activated Relay consume what, like 200 mA?

Notes: When I manually turn on the lighter, the light on the Arduino dims a fair bit, but stays on. The Arduino is running at logic level of 3.3V so that I didn't need a booster. 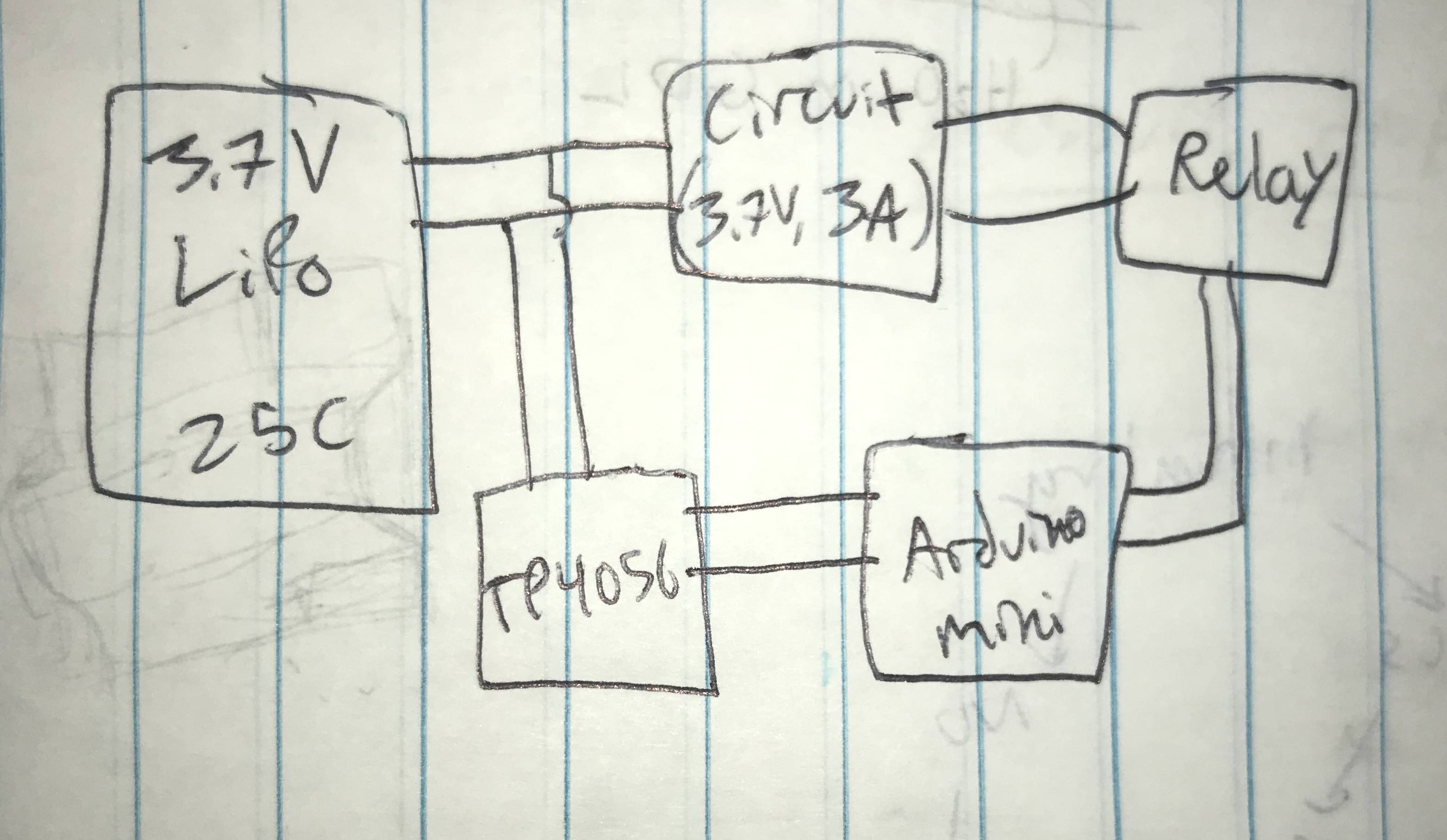 As for fixes, I was thinking about trying to use a transistor or SSR instead of the chunky relay I have now (which would be good, I need this to be compact). Or maybe the TP4056 is failing to provide enough output despite a decent input?

I am FAR from an electrical engineer so if anyone has any pro tips for improving this it would be much appreciated.

The TP4056 is a battery charger, not a voltage regulator. It cannot be used to supply power to a device like an Arduino. It is designed for charging the Lithium Ion battery from a 5V (e.g., USB) source.

By trying to use it as a power supply you're asking for trouble. It thinks it's trying to charge a battery (from a 3.7V nominal source) and will be doing things like:

The TP4056 should be connected to a 5V USB power source and to the battery for charging it. The battery should be then through a (very) low-dropout regulator (ideally a switching regulator with zero dropout bypass ability) to power the Arduino at 3.3V.

Alternatively, if you don't need a (reasonably) precise 3.3V then you can power the Arduino directly from the battery.

Not the answer you're looking for? Browse other questions tagged power relay transistor lipo or ask your own question.

2
Arduino Uno - relay with separate power
1
How much power can a proto board handle?
0
Arduino relay power supply question
0
Two power source for Arduino and a relay
1
Arduino Micro draws too much power from iPhone. How can I change that?
0
Read battery voltage from battery which is powering arduino