Even though this is already a well-debated topic, I couldn't find an extensive discussion about what really is drawing so much power in Arduino's board.

Here is the preamble: I have an Arduino Mega 2560, I measured its power consumption in a steady state with just a red LED turned on with a 560Ohm series resistor. The power supply (Vcc) was given to Arduino from the Vin pin and the measurement were as follows (below the schematic set-up):

Note that, by looking at the datasheet of the ATmega2560, the uC mounted on my Arduino, I saw that the current Icc drawn from the power supply is max 14mA (I suppose when no output is sourcing current, I couldn't find the test conditions, unfortunately). I thought the microcontroller was the major cause of power consumption, but it doesn't seem to be so!

Another thing I considered is the onboard LDO, but the input voltage should change the power dissipated by the LDO, not the current drawn from its output.

It's even more strange if you think that regardless of the Vin, all the electronics after the LDO is working at the same voltage.

After Majenko pointed out a big flaw in my set-up with his answer, I re-measured with Vcc = 12.1V and I measured approximately the same Icc observed at Vcc = 8.1V. I completely agree with Majenko's answer and I would just like to go a bit more in details about what happens while the board is working under voltage.

Here is my analysis:

The minimum operating condition when supplied from Vin is 7V, and that's the "knee" point in Majenko's answer.

However, the maximum quiescent current of the LDO is 10mA, and the Icc of the ATmega2560 is 15mA, so even if we suppose they don't draw any current at Vcc=5.2V, and then draw 25mA together at the minimum operating voltage at 7V, this doesn't add up to the actual increase of 40 or 50 mA that Majenko calculated I observed from 5.2 to 8.3 (which should be the same as from 5.2 to 7V).

And we're not even taking into account that at 5.2V the micro is perfectly able to turn on and keep on the LED, so it's somewhat working and already drawing some current.

Other things that we can take into account, but don't change the facts, are:

So what is the cause of this increase in current consumption from 5 to 7V?

There is a basic error in your methodology which leads to incorrect conclusions.

You cannot determine what is going on from just two data points. Instead you need far more.

Here is a voltage sweep from 5V to 12V with a 0.05V resolution (overkill, but the default setting for the script I use) connected to a Mega: 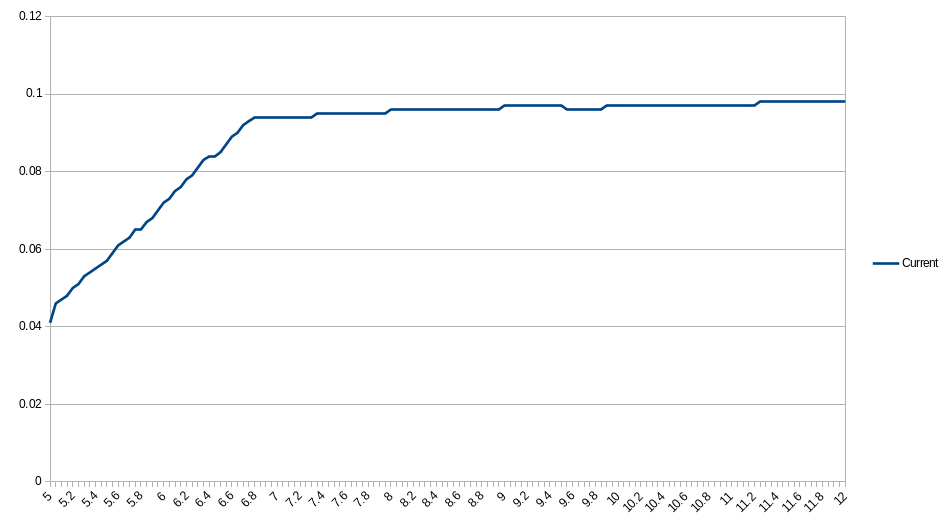 As you can see the current steadily climes in a pretty linear fashion up to a certain point, then it flattens out.

Everything up to the point where it flattens is below the minimum input voltage for the board. During this time the voltage regulator isn't getting enough voltage, so can't regulate its output voltage to 5V. So the board is running under voltage at this point. Once it reaches that "knee" point the voltage regulator can regulate the voltage properly - so most of the components on the board start seeing a steady 5V and their current consumption flattens out.

There are a handful of components on the high-voltage side of the regulator - most notably the voltage divider for detecting the input voltage and feeding it to the comparator that drives the P-channel FET to turn the USB power on and off - which will consume slightly more current when the voltage increases, but that is only very small amounts.

Not the answer you're looking for? Browse other questions tagged power current or ask your own question.