I am designing a new soldering station which will use a 24 V ac soldering iron.

I started to make some research and I designed a few steps of the soldering station. I will use a 24Vac/100VA toroidal transformer. I will use a 24V/50W soldering iron with K type thermocouple. For the thermocouple I will use a LM358 amplifier. Please have a look at the attached schematic and code. The code is not ready yet and I need some help in making the connection between the PID library and output in the code. The voltage on the soldering iron looks like: https://ibb.co/CMF1gQ0 If I rotate the pot, nothing happens on the screen of the scope.

I wrote a few lines of code but I don't know how to make the connection between the PID library functions and the interruption function and the other variables in my code.

Please have a look at the code and at the schematic and tell me what you think... I am waiting for your help.

The most serious is in the wiring of the Arduino. The first argument of attachInterrupt() is an interrupt number. On the Uno, “interrupt 0” is wired to the pin “digital 2”. This is where you should connect the output of the zero-crossing detector (ZERO_OUT).

Then, as noticed by Juraj, there is the issue of the interrupt handler taking too long to execute. This is generally considered bad practice, and it has some negative consequences on the working of the Arduino core like, e.g., the millis() function will be completely off. I do not think, however, that this is a serious issue for you. There is one single time-critical bit in your program, which is the generation of the triac trigger pulses. You really do not care about millis() or any other time-related things. Thus, at least for the initial version of the program, I would not care too much, and just let the interrupt handler delay as needed.

The third issue has been noted by chrisl in a comment: there is a race condition with both the main program and the interrupt handler accessing the same output variable. Race conditions are a nasty kind of bug because usually things work fine “most of the time” and then fail at unexpected times. I would not recommend, however, to run myPID.Compute() with interrupts disabled: that may throw off the timing of your triac pulses. Instead, compute the delay required by the interrupt, save it to a temporary variable, then copy it to a variable shared with the handler. Only the copy needs to be done with interrupts disabled, and that takes only a handful of CPU cycles:

Edit: If things do not work, you should try to debug piece by piece. Sending debug messages to the serial port should help, although serial communication is likely to be significantly slowed down by the long-running interrupt handler. As an alternative, you can use the triac control pulses as a debug aid, maybe with the heating element unplugged. For example:

PID calculates the value of output and it is used in int dimtime = (75*output);.

The aaa_PID object gets the reference to variable output with & so when the PID algorithm sets the output value it sets the value of this variable in your sketch.

output should be volatile double output = 0; because it is used in interrupt.

I hope you wired the zero crossing detector to pin 2, because that is the pin for external interrupt 0. And don't use pin 1 for Triac, it is wired to USB chip too.

EDIT: Your code stays too long in interrupt. You exit the interrupt only in the time after firing the TRIAC and the next zero crossing.

In this Arduino SE answer I offer two sketches which demonstrate Triac control. This is one of them:

EDIT 3: mike's oscilloscope output of the sketch above: https://www.youtube.com/watch?v=dnfy_EsPlVI

EDIT 4: the PID outputs high values for high power and small values for lower power. but the Triac period is the off time. so the period should be something like period = 11000 - (75 * output)

here are the input and output values of mike's code based on this answer (blue is temperature, red is output for the Triac period): 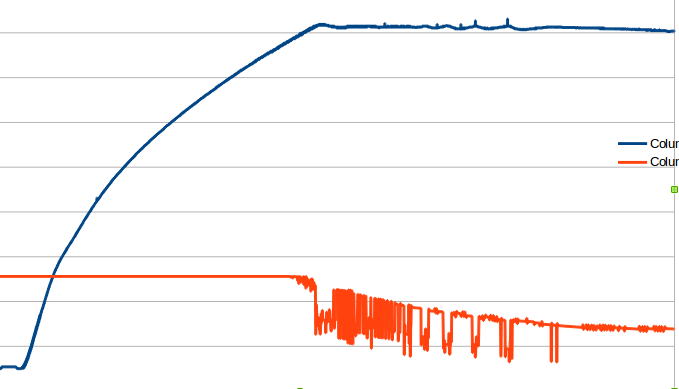 The PID control gets smoother over time as it finetunes its parameters, but I think a simple PID has some problems with the sine relation between the output (time) and the resulting heating power.