How to make an arduino button to forget his past purpose?

For my school project im making an arduino speedometer for a bicycle. I will be using a reed switch sensor to get the speed. There will also be an clock and a termometer, it will be on a 16x2 lcd screen. To get the speed I will need the user to type in his bike size, in zoll. I managed to let the user tap the button until his size and then double tap the button to confirm it. Alright, fine. Now I need the same button to FORGET his last purpose. Because I want to use the same button to change the screen between speed, clock and termometer. SPEED -> tap -> CLOCK -> tap -> TEMPERATURE -> tap -> SPEED ........

I hope you get the idea. After the user picks his size, if he keeps tapping the number it would just keep on growing. So, im trying to make the button forget, or make him go trough that loop only once.

Pick your size tap tap tap double tap, thank you. And stop! I want him to do that only once and never again. I will need the same principle when the user will adjust his clock, he will have to tap to set it, save the number but reset the buttons function.

Thank you! I would really appreciate it!

jsotola wrote a very important term in the comments: state.

You should implement your project as a Finite State Machine (FSM), a very important and powerful, yet easy principle. You divide your program into different states. Each state contains code, that only gets executed, when the program is in this state. Depending on input events (like the user pressing the button), you do transitions between the states.

I already wrote a rather detailed answer about FSMs for this question. You can read it to get a better understanding of FSMs.

For your case I would suggest these states: INPUT_SIZE, DISPLAY_SPEED, DISPLAY_CLOCK and DISPLAY_TEMPERATURE. INPUT_SIZE is the initial state (which you might skip after the first power on, after you saved the size in persistent memory like EEPROM). There you execute your current button code. When you sense a double tap on the button, you change to the DISPLAY_SPEED state. From there on a button press to the DISPLAY_CLOCK state and so on.

In my linked answer I used a simple integer variable as state variable, which holds the current state. In fact it is better (easier to read), when you define an enum for the cases (enums are actually only named integer constants):

That is just a little template for the structure. You need to fill it with life yourself.

What you likely need is a state machine. The behavior of the actions depends on the state the program is currently in. 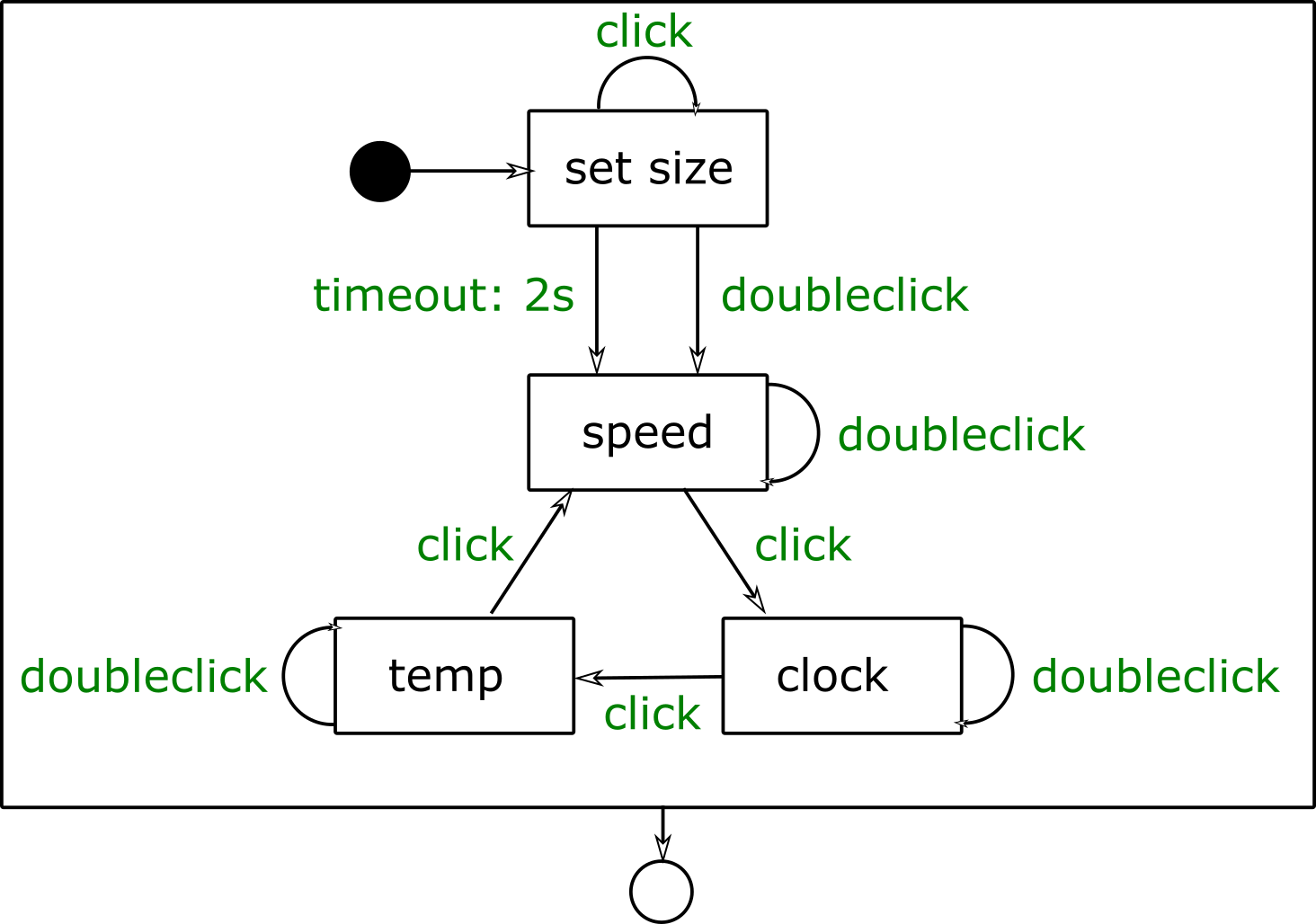 What does it mean?

For the problematic double click action, you can see:

I always recommend drawing the state machine before implementing it. It makes mistakes much more obvious.

There are several ways to implement it. The easiest one being a switch/case. More advanced implementations may use object orientation. When using switch/case, I prefer to have one method per state, like so:

If you know about function pointers, it gets even easier:

Not the answer you're looking for? Browse other questions tagged lcd button or ask your own question.

2
How to toggle LED on button press?
1
Standard Arduino kit button caps?
0
Stepper Motor Button Press
2
How can I know how far a button is pressed?
0
Make one button print different sentences on LCD
0
How do I make my LCD screen scroll text while allowing for button input?
1
OSEPP 16x2 LCD Display Turns On But Does not Display any White Boxes