Setting ports directly is a great way to learn AVR programming. I might recommend this book Make: Avr Programming.

First you need to set the direction of the port in the Data Direction Register as either input or output. If Input, check its state and handle it. Here is a small example.

chrisl provided a very good reference answer. Here I am just adding a few bits of information about the pin mapping and the pin electrical states.

One of the firs things you need when dealing with direct port access is the mapping between the Arduino pin names and the names of the microcontroller (MCU) pins as given by the manufacturer. For the Arduino Nano the mapping is the following:

where “PD0” means “pin number 0 of port D” and so on. Notice that pins A6 and A7 are not listed here, as they are analog only, with no digital I/O capability.

The information above can be found on the product page of the board, under the “Documentation” tab. Alternatively, an image search for “Arduino <board name> pinout” will find some nice schematics like the one below: 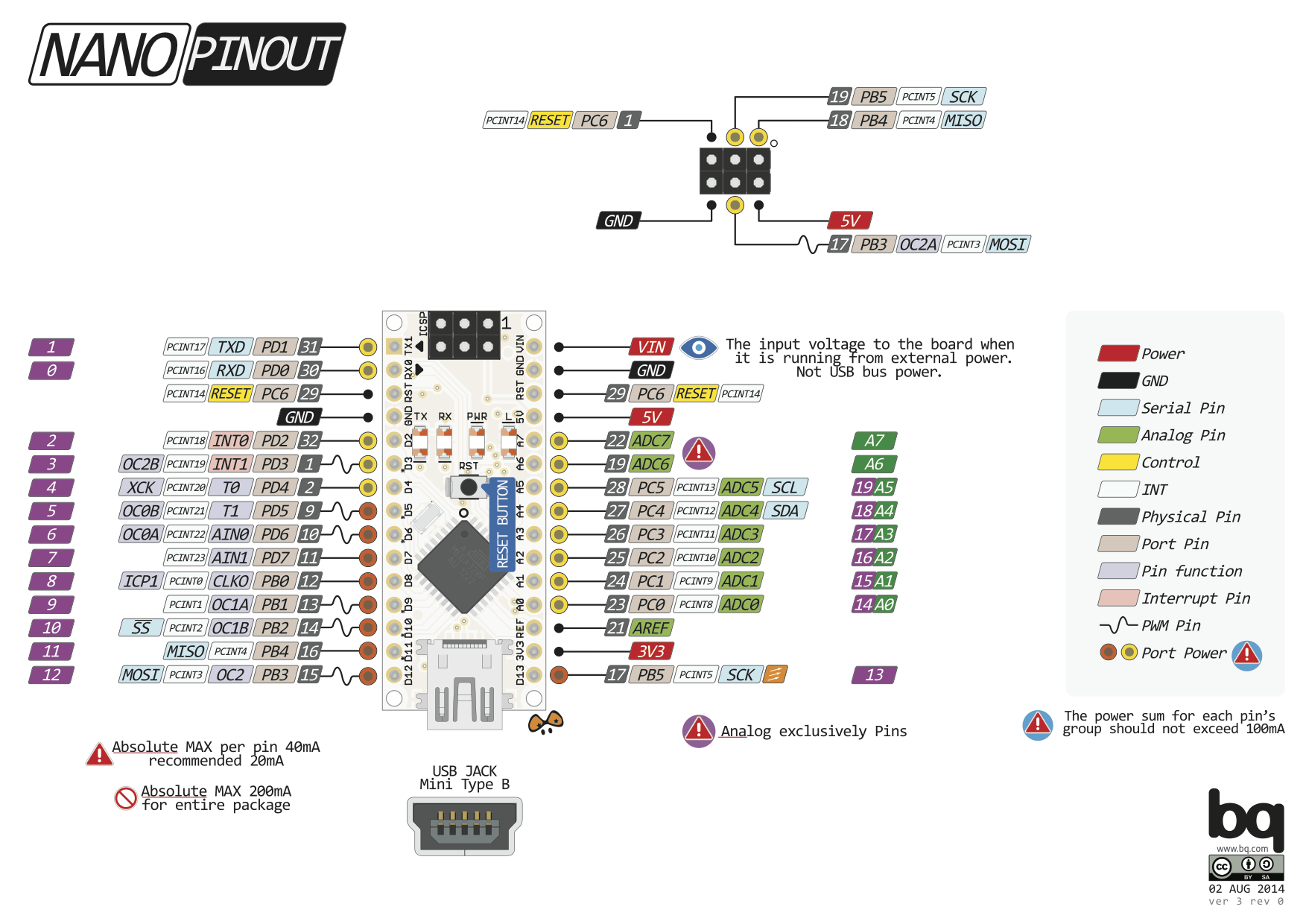 This has already been covered by chrisl's answer in the description of the DDRx and PORTx registers. Below is a summary table showing the four available electrical states of the pins, and how they are selected with the DDR and PORT bits:

The provided equations relate the output voltage (V) and the output current (I) of the pin. Beware that these are just rough approximations, as:

digitalWrite() is just a convenience function to hide away complexity from the user, so that she/he can just use a pin number and a value. This complexity takes some time to execute. If this is too slow for you, you need to go a bit deeper into the rabbit hole and use direct port manipulation:

Inside the microcontroller on the Arduino all the special functions for peripherals and such (digital IO, ADC, Serial(UART), SPI, Timer, ...) are configured via Special Function Registers (SFR). These are specific memory places, that are directly connected to the peripherals. You can configure the whole microcontroller by setting these registers to specific values.

For digital IO you first need to know, that the microcontrollers pins are ordered into groups of max 8 pins. These groups are called Ports. Each available port of the microcontroller gets a character, like PORTB. On the Arduino Nano for example PORTD includes the pins 0 to 7.

For each port we have 3 different SFRs (with the x being the character for the corresponding port), where each bit inside the registers corresponds to one pin:

Now let's take that knowledge into actual code. Here I assume an Arduino Nano, though you can exchange that for most other microcontrollers.

Excourse on bitwise operators: The code above can only be understood by knowing bitwise operators, which are very important for direct port manipulations. I will break down the operations, that are done there:

You can also combine the same operations on a single register. Let's say we want to set both D2 and D3 as output. Then we can either write this as two seperate statements

The Arduino documentation also provides a site to explain direct port manipulation. Also again you should take the time to look into the datasheet of your used microcontroller. At first it will seems very difficult, but doing these direct port manipulations is a great way of learning how to use the SFRs, and then you can do all sorts of cool stuff with your microcontroller. So it really is worth it. You don't need to read or understand the whole datasheet at once.

After all this text now to the specific question. On the Nano pin 9 and 10 are PB1 and PB2. You used a conditional inside your digitalWrite() statement, which I will replace by a complete if statement here. So you can use

instead of your two digitalWrite() statements.

So this question is actually about the fastest possible implementation of digitalWrite.

As described in other answers this can be achieved by using direct port manipulation. But there are actually libraries (for instance, https://github.com/mikaelpatel/Arduino-GPIO) that does this in a portable way and avoids some of the errors that can occur. The library is 10-100X faster than the Arduino core digital pin functions.

Pins in a MCU are organized in ports. On the AVR there are a set of 8-bit port registers that hold the current pin setting. To change the value of a pin the CPU has to read the register and change the corresponding bit associated with the pin. This has to be done as an atomic operation, i.e. an interrupt may not occur during the update of the port register.

Other issues with direct port manipulation is portability. Code written using the AVR io handling cannot be used on SAM (e.g. Arduino Due). There is actually even issues when changing between AVR MCUs.

In short, a portable faster implementation of digital pin functions is recommended.

Below is the code written with the GPIO. It is portable and as fast as direct port manipulation.

Not the answer you're looking for? Browse other questions tagged arduino-nano c digitalwrite or ask your own question.

3
AES Simplified for Arduino - Having hard time achieving desired result
1
Rotating a motor with L293D
1
How to write array of functions in arduino library?
2
Using map for DC motor instead of servo
0
DigitalWrite Cannot Power HC-06 Bluetooth
1
How do I implement reverse enumeration?
1
How the light brightness stays constant when we increase the frequency of stroboscope