Which one is IR led?

I've ever been so confused in my life. I'm new to Arduino and electronics but I just can't figure it out which diode is IR transmitter/receiver or even if it is IR. I know that IR is not visible to human eye but I'm really clueless and I need help distinguishing them. I think the black one is a receiver but when I connect the white/transparent one it lights up so I guess It's not IR diode, right? How do I test them to see it anyways? 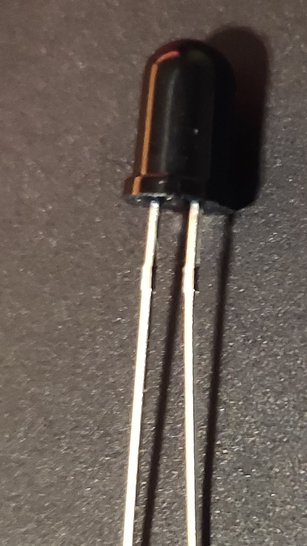 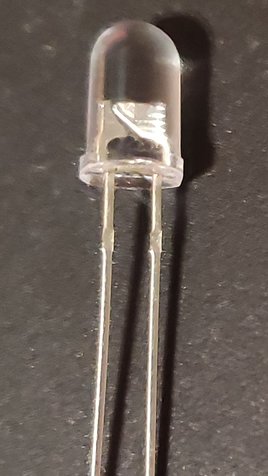 If you connect one of these and you can see it light up with your naked eye then it is not an IR LED, it's a visible-light LED. It's also not an IR sensor.

If you want to see IR, point a digital camera (like in your phone) at it and apply power. The sensors in digital cameras almost always detect some IR, so you can see a faint light on the screen. To test this, point your phone at a TV remote and press the button. If you see a flashing light in your phone's screen, you know it can "see" IR (Most digital cameras have an IR filter to get rid of most of the IR going into the camera, but they generally allow enough IR through that if you point them directly at an IR LED you can usually see it, at least faintly.)

The black one is probably an IR receiver. The color of the lens probably blocks visible light but not IR.

All the IR LEDs I've seen have looked clear, but I could not see any visible light when I powered them up.

The dark coloured one is an IR photodiode. Osram SFH203-FA

Not the answer you're looking for? Browse other questions tagged led ir infrared or ask your own question.

1
What in the example code is different from my test code? LED matrix lights up differently
1
How to power both arduino and 1 color led strip from single power source
1
Using an Arduino for a Diorama Controller
2
how to prevent IR signal to go through 3d printed plastic?
0
Simulate V1838B IR LED output
0
Arduino emits signal A (infrared) but another Arduino receives everything but A (IR-LED problem)
0
How to connect LED lights for 3D Printed Robot
2
I'm looking for a way to emulate addressable LED strip using LED diodes in a custom arrangement